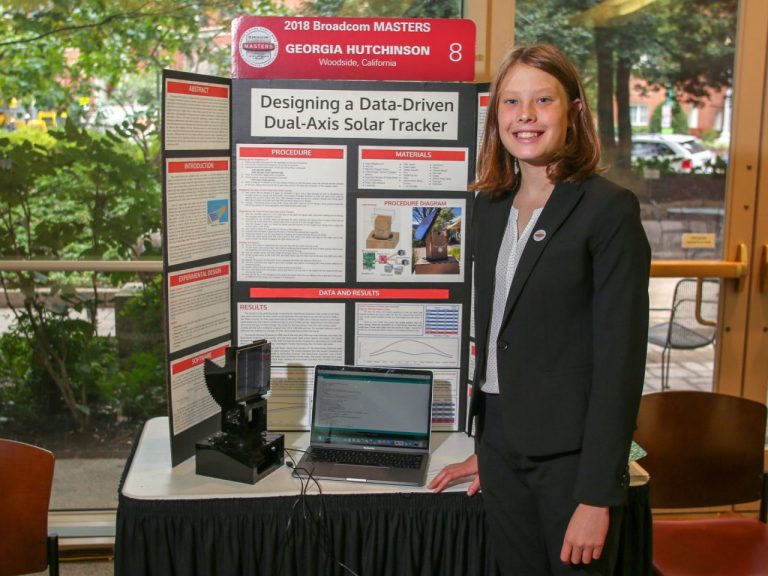 Each year, hundreds of middle-school students compete in the national Broadcom Masters competition

Hutchinson received $25,000 for her device and is working on patenting the invention.  She placed first in a pool of 30 finalists, who received a total of $100,000 in prize money. The Society for Science & the Public and the Broadcom Foundation, which supported the competition, also gave $1,000 to the STEM — science, technology, engineering, and math — program at Hutchinson’s middle school.

Hutchinson’s invention, which she calls a data-driven dual-axis solar tracker, relies on publicly available data from the National Oceanic and Atmospheric Administration to track the sun and make solar panels more efficient.

Instead of using costly sensors, the invention uses a computer program designed to figure out the sun’s location and tilt solar panels for optimal power production.

Hutchinson said she hoped that by helping solar panels produce more energy, the invention would provide an economic incentive for people to invest in solar power. “Focusing on renewable resources to reduce our carbon footprint is crucial if we want to avoid extreme weather conditions”, she said.

Near Hutchinson’s home in the San Francisco Bay Area, those kinds of weather conditions have led to disaster. In early November, Northern California was hit by the most devastating fire in the state’s history; it killed at least 86 civilians.

“The smoke was so bad that thousands of schools all over the state had to be closed down because of the smoke,” Hutchinson told the press. “We’re seeing right now the effects of climate change, and the data-driven dual-axis solar tracker I built is designed to make solar energy more economical.”

Hutchinson said she was working with a lawyer to get her invention patented, adding that she would use the prize money for her education.