A century of attempts at inventing drone delivery 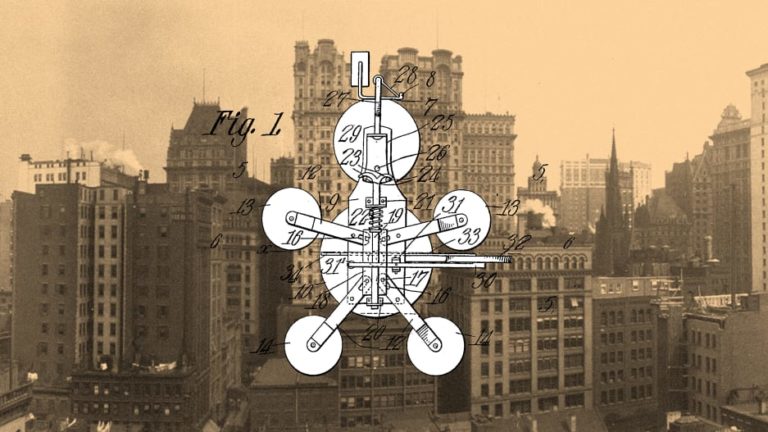 From self-propelled mailboxes to mail-via-missile

Amid the COVID-19 pandemic, Google’s Wing delivery drones have supplied Virginia residents with toilet paper and medicine, while some grocers have turned to drones to fulfill unprecedented demand for grocery deliveries. Late this summer, Amazon moved a crucial step closer to offering consumers drone deliveries in half an hour or less when the tech giant secured a Part 135 air carrier certificate from the Federal Aviation Administration, allowing it to operate commercial drone flights.

Likewise, Walmart has partnered with drone companies DroneUp and Zipline to make contactless deliveries of COVID-19 testing kits to customers in Nevada and New York. Flytrex also partnered with the retail giant to explore, as Walmart put it, “how drones can deliver items in a way that’s convenient, safe, and—you guessed it—fast.”

Drones have hit their stride (or rather their glide). But while drone deliveries may just be taking off, the runway for airborne, on-demand delivery actually extends back well over 100 years. Even before unmanned aircraft were developed for military purposes during World War I, inventors had already been devising plans for commercial delivery systems that presaged today’s delivery drones by over a century.

In what one could say was an early foreshadowing of autonomous delivery solutions, way back at the beginning of the last century, Charles N. Libey of Lima, Indiana, received a patent in 1907 for a mail-carrying apparatus which would send self-propelled mailboxes zipping on an aerial line between residences. In a similar—though perhaps more grounded—attempt at elevated delivery that same year, Missouri-based inventor William H. Mozingo secured his own patent for a mail collection and delivery system that would have high-speed trucks and cars move along aerial tracks and “automatically [stop] at predetermined points” for collection and delivery, powered ingeniously, as the inventor put it, “with electric driving means receiving current from adjacent conductors through trolley connections therewith.”

Impressive as their systems may have been, Libey and Mozingo weren’t proposing new ways of delivering the mail simply for the sake of innovation—like most inventions, these systems were invented to solve a growing problem: From 1890 to 1910, the U.S. population surged from just under 63 million to more than 92 million, driven by immigration, natural population growth, and steadily improving life expectancy. As the country continued its westward expansion, its population was also spread out over a much wider area than in the 19th century. This combination of factors created new logistical challenges in delivering mail and demanded novel approaches for relieving bottlenecks in service and improving access for remote and rural communities.

In short, though they may not have used the term yet, these early Americans knew the last-mile delivery challenge all too well. And much like today, way back in the early 20th century, inventors looked to the skies.

Over the next half-century, inventors would receive patents for a range of other systems designed to speed mail deliveries, including a centralized parcel conveyor, made up of a series of tubes, pulleys, and conveyers, a parcel receiving chute, and a package delivery chute. While those patents may have expired long ago, they provide illuminating insight into the longstanding quest to harness technology and innovation for hyper-efficient deliveries.

Indeed, that same quest even saw the U.S. Postal Service attempt to send letters via missile. As Mental Floss describes it: “In June 1959, the U.S. Navy sent 3000 letters on a guided missile toward a naval auxiliary air station in Mayport, Florida. Launched from the USS Barbero, a submarine that was stationed 100 miles off the U.S. coast in international waters, the 36-foot Regulus I missile made it to Mayport in 22 minutes.”

But the missile attempt turned out to be a dud. Most of the letters still had to be hand-delivered to recipients, and the post office “killed the program, pointing out that the letters sent from the USS Barbero ended up taking some eight days to reach their intended recipients. Not exactly rocket speed.”

Nevertheless, though logistically impractical and unsustainable, the effort at missile mail did mark another milestone on the path toward on-demand delivery systems.

Fast-forward to the present, and as advances in technology and regulation enable delivery drones to take flight, the vision espoused by the inventors and dreamers of the last century is coming closer to fruition. Forecasters project that the global drone package-delivery market will soar from $2.1 billion in 2023 to $27.4 billion by 2030—an increase of over 1,000%.

Fourteen years after the FAA issued its first commercial drone permit, the story of commercial drones still remains the story of visionary innovators such as Charles Libey and William Mozingo, who identified the need for technologies that would speed deliveries at scale with minimal operational and overhead costs. And while drone delivery will undoubtedly grow from novelty to the “new normal” in the years to come, it will remain rooted in the same commitment to ingenuity and bold thinking that has propelled such progress for centuries.