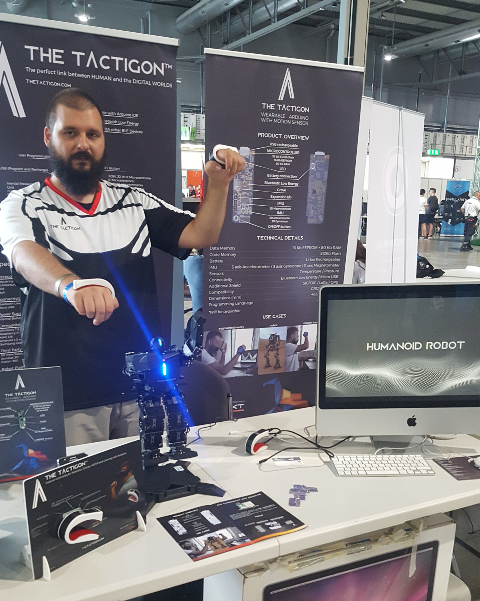 Hello! The tactigon is Here to tell you about The project you will see at #MFR18

No way: The Tactigon team are not able to “stand still” on a project. We ask them to keep us all updated about their progress and here come some juicy news directly from team members. Enjoy it!

“We’ve upgraded our previously created project of robot control by adding another Tactigon Skin to manage both arms of the robot, while keeping previous implemented actions – like walking and making bows. T-Skin is man-machine interface revolution. It’s the first programmable fashion design hand band and It’s not only a device for specialized and technology passionate people but it’s the real extension of the hand. Hand is our natural interface with real world, and with T-SKIN it becomes our interface with digital world.

You can download the APP and T-SKIN from our store and it will turn into a man-machine interface, or a robot controller or a drone controller. It is very easy to use thanks to the ergonomics form factor; one application can be the use of T-SKIN during company presentation or a training course. T-SKIN has 4 programmable key for different combination of hand movements and fingers.

THINGS USED IN THIS PROJECT

HOW DID WE MANAGE IT?

The humanoid robot has an Arduino Leonardo inside, and this time we have installed two Bluetooth Low Energy modules on the “backpack.” The Tactigon board is inside its T-Skin hand band, providing 8 command buttons and an ergonomic case for both hands!

Bluetooth Low Energy architecture is based on two roles for the devices:

The Tactigon, and T-Skin, can act either as Central Role and Peripheral Mode.

For this project, we used only T-SKIN but is possible to integrate the system with other Tactigon board, for instance placed on elbow, to avoid interpolation of the movement and follow the action of the controlling arm!

Possible applications are many, not only at a recreational level, but also at an industrial one.

By future improving and development of the algorithm we can, for example, achieve control of industrial robots with a simple movement of human arm.

T-SKIN will allow this movement with no load and this means less stress and less effort for human body.

The project is still under development to add new features, commands and managing capabilities!

You will find this project and more in our “sketch arena”: a digital creative space for maker and technologies lover. Visit our web site here and sign up.

Next Industries is a 2014 Company born to develop smart devices and sensors provided with Iot Technology, made of technological highly skilled people, who are expert in vibration detection for big structural monitoring systems in brigdes, tunnels, undergrounds, dams applications and so on. Devices developed by Next Industries communicate with Cloud through wireless connectivity and are able to manage alarms or notifications, thus being “intelligent”. The so called “smart systems” are devices that transform the way you work, live and connect to the world as they easily fit both for indoor and outdoor installations.

Maker Faire Rome is the European edition of Maker Faire. It’s organised by InnovaCamera, a Special Agency of the Rome Chamber of Commerce, whose mission is to place the city of Rome at the centre of the debate on innovation, by spreading the digital culture, and developing the individual and collective entrepreneurship that is so integral to the Maker movement’s genetic makeup. Maker Faire Rome combines science, science fiction, technology, entertainment and business to create something totally new. It’s an event created to cater to curious participants of all ages, wishing to experience first-hand the makers’ inventions. Inventions that are the result of a desire to solve everyday problems, whether big or small. Maker Faire Rome is an event designed to turn the spotlight on hundreds of projects from around the world that are able to catapult visitors into the future.