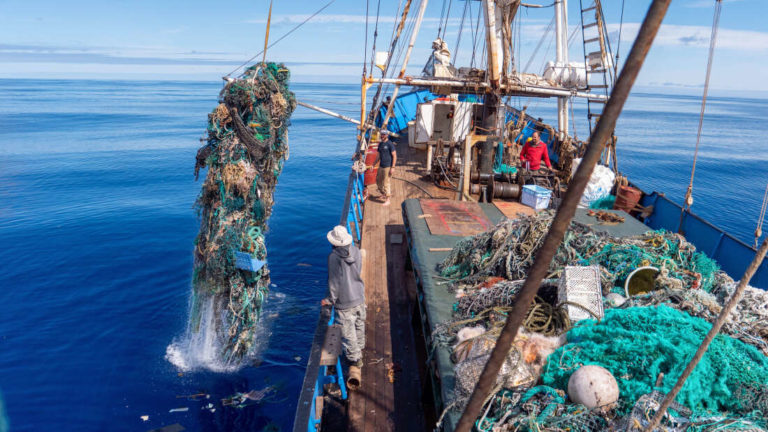 A recent clean-up operation has removed around 103 tons of fishing nets and plastics trash from the Great Pacific Garbage Patch in between the coasts of California and Hawaii.

The feat was completed during a 48-day expedition by the Ocean Voyages Institute, which says its haul is the “largest open ocean clean-up in history,” doubling their previous record from a 25-day stint last year.

Although they did recover a large amount of consumer waste and plastic trash, much of the objects they dragged up were commercial fishing equipment and “ghost nets” that were carelessly discarded overboard by fishermen. Unfortunately, it looks like this plastic had already claimed some victims as the discovered a number of turtle skeletons wrapped up in the ropes.

“There is no cure-all solution to ocean clean-up: it is the long days at sea, with dedicated crew scanning the horizon, grappling nets, and retrieving huge amounts of trash, that makes it happen,” Locky MacLean, a former director at Sea Shepherd and ocean campaigner in marine conservation for two decades, said in a statement.

“We exceeded our goal of capturing 100 tons of toxic consumer plastics and derelict ‘ghost’ nets, and in these challenging times, we are continuing to help restore the health of our ocean, which influences our own health and the health of the planet,” added Mary Crowley, founder and executive director of Ocean Voyages Institute, who goes by the name the “Ghost Net Buster”.

The Great Pacific Garbage Patch can be found between Hawaii and California in one of the most remote regions of the Pacific Ocean. It’s thought to contain around 80,000 tonnes of plastic trash, most of which comes from commercial fishing and maritime operations. Ocean garbage patches, such as this, are formed by rotating ocean currents called “gyres,” which sweep up and corral plastic pollution into a single area.

From microscopic flecks of microplastics to giant webs of netting, all of this non-biodegradable junk poses a real threat to marine biodiversity. In one especially shocking example, researchers in the Philippines discovered a dying whale that had swallowed over 40 kilograms of plastic trash, including ice sacks, grocery bags, and banana plantation bags.

Worryingly, a recent scientific report discovered at least four sperm whales, three beaked whales, two baleen whales, and at least five other cetaceans swimming within the Great Pacific Garbage Patch where this recent recovery took place. Perhaps now, their journeys might be a little bit safer, but it’s really a drop in the ocean.