ESA to put Webb into orbit. The largest telescope ever, to replace Hubble 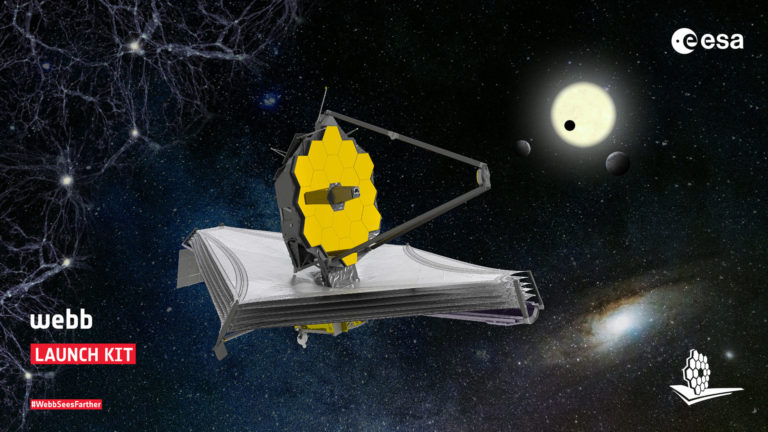 WEBB IS A COLLABORATIVE PROJECT BETWEEN NASA, ESA AND THE CANADIAN SPACE AGENCY

Webb will observe the Universe by covering longer wavelengths of light than the Hubble Space Telescope, opening a new window on the Universe

On 18 December 2021, the James Webb Space Telescope will be launched from the Kourou base in French Guiana aboard Ariane 5, ESA’s most powerful rocket, on the VA256 mission. Webb is a collaborative project between NASA, the European Space Agency (ESA) and the Canadian Space Agency (CSA). It is the largest space telescope ever, with a length of 20 metres, a mirror diameter of 6.5 metres and a cost of 10 billion dollars. As part of the international collaboration agreement, ESA provides the launch service for the telescope using the Ariane 5 vehicle. In addition, ESA is responsible for the NIRSpec instrument and contributes 50% to MIRI, and provides personnel to support mission operations.

In the opposite direction to the sun

Ariane 5 will take the telescope directly into an extremely precise transfer orbit towards its destination, the L2 Lagrange point. Once separated from Ariane 5, Webb will continue its four-week journey to L2 on its own. L2 is four times farther than the Moon, 1.5 million km from Earth in the opposite direction from the Sun. More precisely, unlike Hubble, Webb will not be in the Earth’s orbit but in that of the Sun.

Webb will observe the Universe in the near and mid-infrared, wavelengths longer than visible light. For this purpose, it is equipped with a range of state-of-the-art cameras, spectrographs and coronagraphs. Webb will cover longer wavelengths of light than the Hubble Space Telescope, with 100 times the sensitivity, opening a new window on the Universe. Webb’s longer wavelengths will make it possible to discover hidden parts of our solar system, look inside the dust clouds where stars and planetary systems form, reveal the composition of exoplanets’ atmospheres in more detail and peer further back in time to get a glimpse of the first galaxies that formed in the early Universe.

What Webb will do

After the deployment of its components and the first six months of testing, it will begin observations in 2022. Among the 266 programmes selected for the first year, nine are led by Italian researchers: seven by the National Institute of Astrophysics (Inaf), and two by the University of Milan-Bicocca and the Scuola Normale Superiore in Pisa. There are 88 projects coordinated by scientists from ESA member countries.

Thanks to its unique capabilities, Webb is a key mission in ESA’s fleet of scientific space missions, a unique opportunity to unlock the secrets of the Universe. The discoveries it will uncover will complement those of ESA’s current and upcoming exoplanet missions: Cheops, Plato and Ariel. Webb will also monitor the Euclid, ESA’s future spacecraft, to understand the structure of our cosmos. In addition, Webb’s findings will help lay the foundations for the future Athena X-ray mission and ESA’s LISA gravitational wave detector.