This workshop, suitable for an audience ranging from 10+ years upwards, allows the participant to make the most varied furnishing accessories and ornamental objects with a modular wooden module and a joint made with the 3D printers.
The workshops will last 45 minutes and are repeated every hour for the duration of the fair.
20 participants are allowed at a time and will be divided into teams of 2 people . Each team can use 50 modules and 65 joints and can participate with a parent or be teamed up with another child.
At the end of the workshop the participants will be able to buy their own building or a kit and the proceeds will be completely donated to charity at the FIAGOP Italian Federation of Pediatric Oncological Hematology. 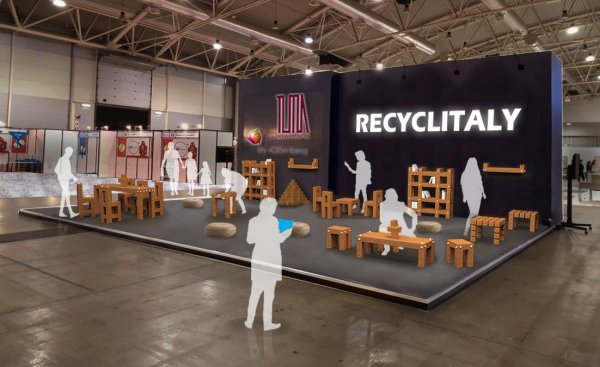 Ely Rozenberg, Industrial designer, professor of Industrial Design, curator, producer of design exhibitions and recently design entrepreneur. As a professor of Industrial Design, he coordinates the design department of RUFA (University of Fine Arts in Rome). As the owner of a design studio, he has worked with small and large organizations such as the multinational MMC (Mitsubishi Chimical Coorporation), Algida (Unilever), Leo Burnett, Osram, IBM, MIbacT and others.
In the last year he is involved in two start-ups in the field of WT (wearable technologies) and cultural merchandising with which he won calls for proposals from the Italian Ministry of Development. He has been awarded numerous prizes, such as the first Compasso d'Oro International Award ® 2015, RED DOT BEST OF THE BEST ® 2012 and GOOD DESIGN ® AWARD 2017 of the Chicago Athenaeum Museum of Architecture and Design.

Thomas Fabio Borrelli, 31, entrepreneur and product designer. Graduated in Product Design at the European Design Institute in 2013. Riccardo Luna (Journalist of the Republic) mentions it in the TOP 10 of the 230 inventions presented during the "Maker Faire European Edition 2013" fair, with the "Spock Hydrogen Lamp" lamp working with the exclusive use of water and solar energy. He is a founding member, creative director and laboratory manager of Elephant Consulting Group, a company operating for 5 years in the communication and marketing sector with a special department that deals with the creation of prototypes. In Tuma Studio he is a founding member and holds the role of sole director. Since 2014 he is responsible for the international graphics of Gambero Rosso and in his spare time he realizes artistic installations in the lighting field with the collective Methamorphosis.

Luca D’Elia, 27, founding partner of the newly established Tuma Studio. Graduated in Product Design at the European Design Institute in 2014. In 2019 he obtained a master's degree in Science in Product Design (course delivered in English) at the University of Rome Sapienza with a final mark 110/110 cum Laude and certification of path of excellence. He worked for several years with NACSound and the engineer Francesco Pellisari, who introduced him to the world of quality craftsmanship related to ceramics and woodworking. After a period spent in Cambridge during which he contributed to the design of a speaker in collaboration with the architect Ron Arad for Apple Inc. he returned to Italy where, during the course of master studies, he cultivated interest in manufacturing digital and 3D printing prototyping. This passion, and attention to modern humanitarian issues such as immigration and reception, resulted in a degree thesis that united digital fabrication and awareness on the subject of migrants in Italy, with particular attention to condition of children and their resilience, a thesis that earned them the right of publication.
FACEBOOK
Category Kids Workshop · Type Workshop
#3D printing #Artisans & New Craft #Cultural Heritage #Education #Energy & Sustainability #Fabrication #Kids & Education #Recycling & Upcycling #Business of Making #Funding & Crowdfunding #Fabrication Tools
Back
Data updated on 2020-12-13 - 11.41.07 pm