THE NEW SCIENCE OF INTELLIGENCE - MFR 2022

THE NEW SCIENCE OF INTELLIGENCE

Robots have already changed the world, with millions of them working in factories, warehouses, hospitals, households. But what we have seen so far is only a hint of what they could do in the future. Robots could have a much bigger impact if they were more autonomous, and could explore new environments or learn new tasks on their own. If they were more agile and could walk, run, fly and swim like animals do. If they could interact naturally with humans, and work safely around them. In other words, if they resembled living beings a little bit more.

The new science of intelligence – an event organised by Nature Italy, I-RIM (the Italian Institute for Robotics and Intelligent Machines) and Maker Faire Rome - will offer a glimpse into that future, and present the scientists who are working to create a new generation of robots. Six speakers will take the stage for visionary and captivating talks, showing both the impressive results they have achieved in their fields, and the scientific challenges that still lie ahead.

One after the other, the talks will show how engineering, biology material science, neuroscience, biology, psychology, physics and many other disciplines are converging in today’s robotics, making it a “new science of intelligence” that has the potential to transform the physical world just like Artificial Intelligence has transformed the world of data. A scientific endeavor where Italian scientists, working both in Italy and abroad, are playing a key role.
Learn more and register here https://makerfairerome.eu/en/event/the-new-science-of-intelligence-2/ 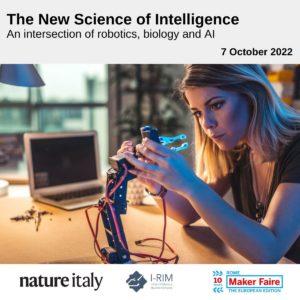