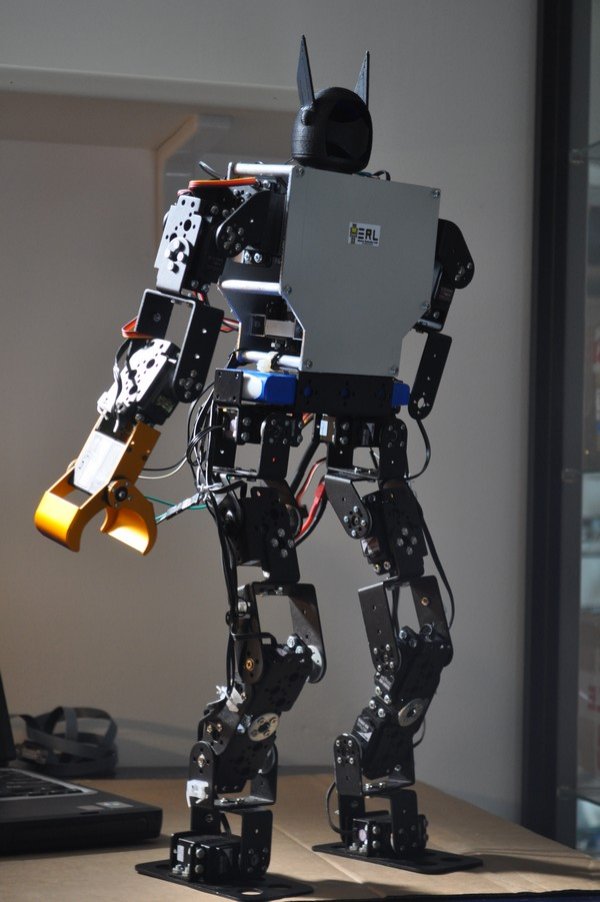 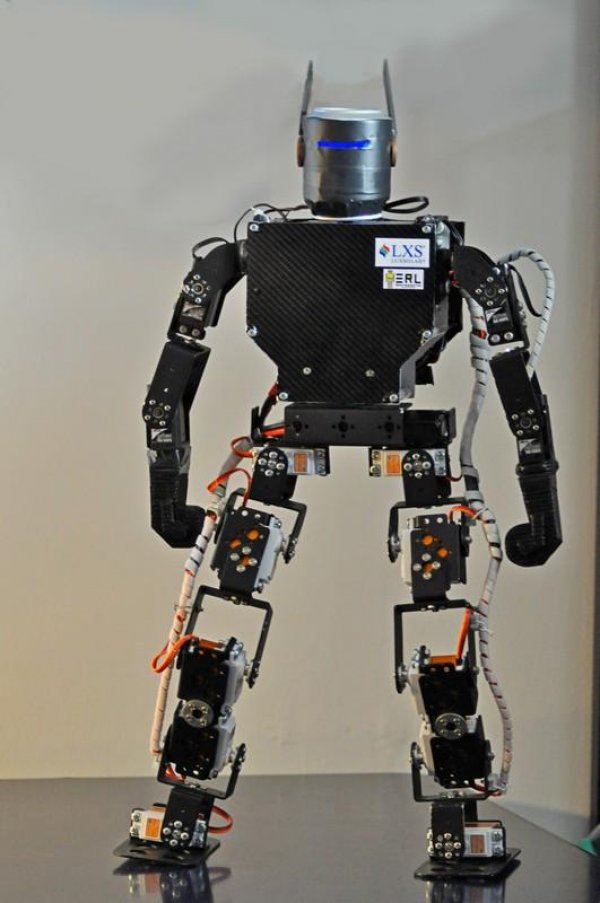 The first idea was to make a robot 55-60 cm size, for RoboCup soccer major, but for his ability heâ€™s suitable for a didactic kit.
The robot has 20 degrees of freedom, obtained with digital servomotors. Supporting structure is composed with aluminum plates and 1 rotating joint for the â€˜pelvisâ€™.
The controller works with a 8-bit processor ATmega128, so to perform basic movements and to manage analogical and digital sensors. For the next robot weâ€™ll use 1 processor STM32F4 to process images as required for RoboCup major. 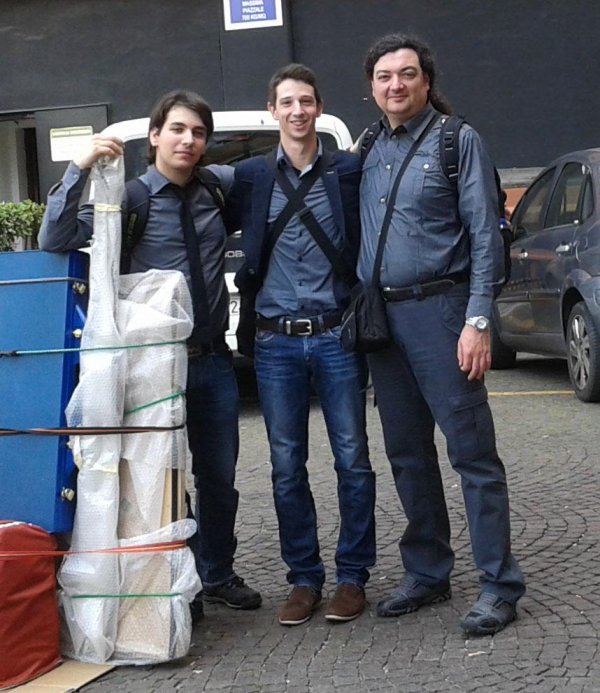 Raimondo SgrÃ² born in â€™73, graduated Diploma for Industrial Electronics at ITIS Marconi of Domodossola, in â€™91 and then, in Physics at Milan University in '98, with thesis about Fossil Radiation 3K. So, he began a teacher, and later, advisor designer for electronic systems also. Since 2004 concerned with Educational Robotics, he published several articles about that. Since 2008 he organized extracurricular classes for teams participation in robotics competitions as: Robocup and Zero Robotics. Great results his students obtained: 4th place at European Level in 2013 for Zero Robotics Finals, several podiums at National Levels in Robocup Junior competitions and one World Title in 2013 in Eindhoven, (Soccer Open Superteam) Holland.
In 2014 he was one of the founders of a non-profit association, for Robotics fans.

Mazzaccaro Alberto, 22, lives in Domodossola. Heâ€™s working for "EU Gravellona Toce" Enel Green Power SpA, as maintenance technician (hydroelectric area). From early age, he practiced basketball, running trail, getting provincial and regional victories. In 2012, obtained Qualification in Electronics and Telecommunications at ITIS Marconi of Domodossola, with 95/100. Thanks to the Robotics Labs, at the High School, he participated in Robocup Jr editions of: Vicenza Italy, Catania and Riva del Garda, getting two 2nd places for the Dance Category, with his teammates. In order to continue Robotics, he founded the Association Elettra Robotics Lab (non-profit association) in 2014, to promote and popularize Robotics.
His motto is: "Nothing is impossible, â€˜cause if it isnâ€™t today, itâ€™ll be tomorrowâ€.

Davoli Sean, born in Verbania in â€™93, working in robotics since the early years of High School, graduated at ITI Marconi in Domodossola in 2013. He participated in several Educational Projects and events, with success at National and International Level until getting a World Title in 2013. Other projects: 5 RobocupJr editions, ZeroRobotics (in collaboration with MIT NASA and ESA), some RomeCup editions for various categories.
In 2014 with a friends and teachers group in 2015, he founded a non-profit association for Robotics development in education and practice: Elettra Robotics Lab, collecting good results series. The main interests for Robotics are: development and research of hardware solutions (in both electrical and mechanical), applied to humanoid robots.