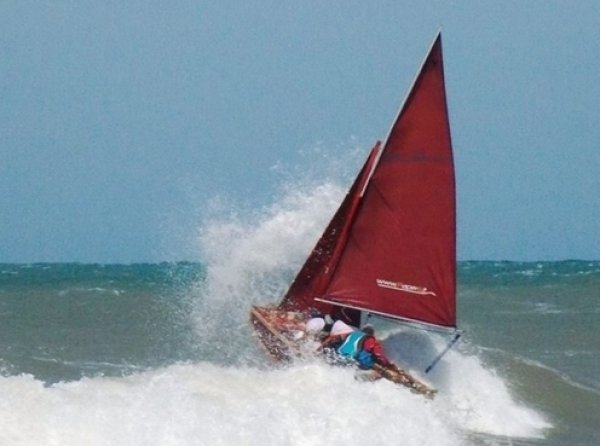 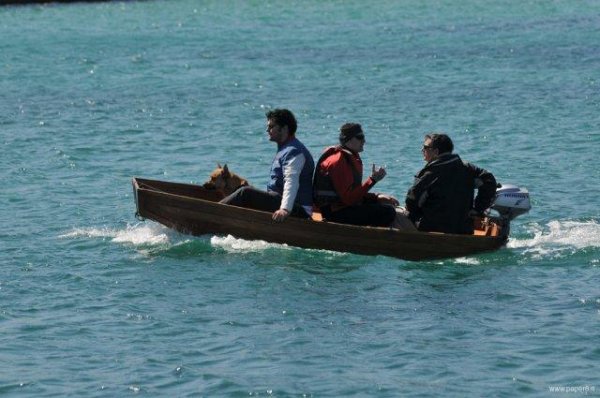 OARS
We like to underline how Paper8 is an excellent row boat, her light weight and flat bottom allow her to gently glide on the water. This trait, extremely rare amoung the smaller sport boats , permits an extremely simple usage even if only occasionally without having to engage oneself in regular and expensive maintenance of the motore.
Using Paper 8 as a row boat the two side benches that close the well which is indispensibile when sailing with a sail or a motor become surplus (for an ulterior weight saving), as the rower can find himself seated comfortably on the stern bench (rowing forward) or on the central bench (rowing backward).

MOTOR
Naturally the low friction on water allows Paper 8 to be efficient even with a motor, that can be of inferior power with respect to all the other boats with equal capacity (400 kg or 880 pounds). This translates into several advantages: considerable savings on purchasing, on wear and tear, mantenance and usage of the motor and the undoubted utility of a riduced weight/encumbrance in trasport.

SAIL
Certainly the best way to fully enjoy Paper8 remains that which favor her nobile nature and arm her with a sail: discovering how easy and how simple it is to sail appreciating only the sound of the wind and the sea that accompany you.
In fact Paper8 is a school boat, studied in every detail to put a person at ease so that each one can follow a modulated didactic course based on their own personal needs, deciding freely if they want to program a tranquil and relaxing outing at sunset or an adrenaline based raid in the company of friends competing for the apertive before lunch taking advantage of the strong breeze of the late morning.
In addition, thanks to two exclusive solutions: double disposition of the internal/external floating reservoirs anf riduction system of the sail, a solution never adopted by any other boat with these dimensions
Paper8 has become the ideal boat to ricuperate the right trim avoiding capsizing (an event that is free of physical dangers on a sail drift, but sometimes lived with a certain amount of stress by those who are novices) againt conduction errors and at the same time the most adequate means for older people or handicapped people, that can manage their own movements on board without having to necessarily execute the maneuvers with extreme swiftness.
Never forget though that Paper8 is a high performance boat, it adapts even to expert personnal: it is sufficient to place the reserves on the inside to find the original lines of the bottom of the Mirror, with all her superb capacity to hold the sea and to hold the wind. With this trim your Paper8 is free to express performances without limits, especially with a strong pace (with the stern, losco, and cross winds) in the place of the jib you will use the rollable gennaker armed on the bowsprit.
Italy
WEB 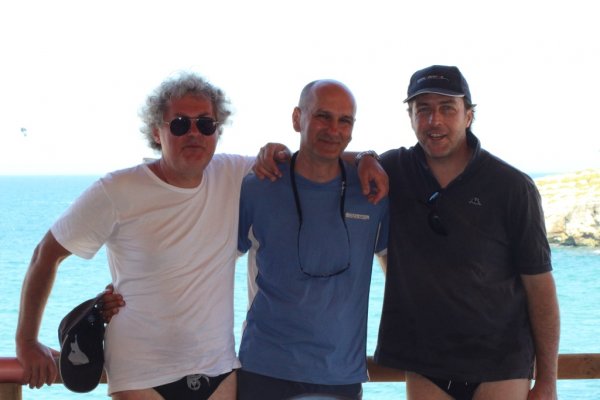 Michele Vino
Inventor-designer, with Giorgio Bergamini - Marco Oliveto, and co-signer of the patent boat PAPER8.
Passionate model maker and ship designer, counts among its concretizations many accomplishments of great value, including the design and construction of a cat MAGIC traditional sailing auric inspired by a drawing of Bolger. The vessel MAGIC has been selected by Velalonga ed. 2012, an event of international importance, which takes place in Venice, where sailing ship most representative and symbolic of ancient seafaring tradition. His image was printed on the material and reproduced in all the official events of the event.
Michele Vino has also collaborated in the design and refitting of the fast and innovative Pinocchio, the trimaran sailing offshore shipowner Marco Oliveto.
Founder member of the sailing sport and social promotion SAILFRIEND.

Marco Oliveto
Inventor-designer, with Giorgio Bergamini - Michele Wine and co-signer of the patent boat PAPER8.
Navigator of great experience, admitted to the examiners at the Command of the CP for the issuance of Nautical Patent with the title of "Expert Sailor".
In collaboration with Studio D'Ali came to life the project of "Pinocchio", a trimaran sailing along 10 meters wide and 6, which was built in its collaboration with Michele Vino and Giorgio Bergamini, who has provided project its immense wealth of experience acquired on boats and catamarans highly successful America's Cup. The trimaran Pinocchio is a very active boat, strong and light, able to navigate over long routes in all seasons, competing brilliantly with boats built by the most renowned world shipbuilding.

Cosma Cafueri
President of the Research Center "Hrand Nazariantz".
President of the cultural CE.DI.S.A. (Centre for the Education and Environmental Science).
President of sports and sailing for social SAILFRIEND.
Some projects (DIDALUS and ESA) have been reported by the Ministry of University and Scientific Research and Technology on the occasion of the National Week of Scientific Culture. Design and coordination of the event SCIENZARAGAZZI, festival of science education and the environment.
Direction in 1997 at the S.E.S. "Piccinni" of Bari's project "ECOSCIENZA", by establishing and leading directly to a scientific laboratory-ecological (still operational) for the prevention of minors at risk (see: De Mondelli-De Donato “Cercando il Fuoco” - Levante Editori - Bari) .
In 2000 he provided advice for the preparation of educational-scientific at the theme park "Felisia" Castellaneta Marina (TA).
Publications of teaching, education and popular science are listed since 1997 on the "Villaggio Globale", the quarterly journal of science and ecology and are available on the magazine's website (www.vglobale.it)
In 2007 he created, published and presented to the public "BoschidiBari" photo calendar popularizing the woods of the province of Bari, still unrecognized.
A keen sailor and diver, since 1999 leading nautical projects aimed on two main areas:
• science education on an experimental basis
• prevention of juvenile delinquency.
With CE.DI.S.A. SAILFRIEND and has contributed to the design and construction of many of laboratory activities in shipbuilding, marine camps.
#Water #Sport & Leisure
Z4 - Nautica sostenibile - Paper8: la barca pieghevole a propulsione ibrida
2015
Events linked to this project
Back
Data updated on 2020-12-13 - 11.41.04 pm