In recent years (School year 2012/2013) inside the subject denominated Technology,Drawing and Design aimed to the production of a musical band completely robotized, had been activated.
The initial project was completed only in a part, because there were great difficulties in the creation of the automation that had to control the acustic guitar.

Practically “only”the piano robot and the drums robot were produced.
This year we have decided to complete the band with the project “guitar robot”; so this relation describes the features of the acustic robot, through the use of Arduino board.

The device we want to present is a robot that can play a fully automated acustic guitar.
The commands are transmitted by an android smartphone,that by the means of a terminal Bluetooth send the code to Arduino, this code corresponds to the song to perform. Arduino decodes the received code and processes the program corresponding to one of the tasks stored in memory, providing the actuators (motor steppers and servomotors) the necessary instructions for the correct function of the robot. The guitar is placed horizontally on a smooth and regular surface where all the handcrafted supports are to support the various actuators.

On the right side of the body,two aluminium arches were placed, fixed on the surface with threaded rods supporting each servomotor. In particular each servomotor equipped with a pick is placed on a rope so that it is able to pluck the strings with precision.

On the neck, six stepper motors with cogwheel on the axle move six bars to rack, kept under pressure and in position on the strings by a plate in plexiglass opportunely grooved.
A note corresponds to each position.

Technical features
The microcontroller used for the automation is Arduino Mega 2560, a board embedded with microcontroller Atmega 2560. It has 54 I/O digital (pin),16 analog input, 4 UART (serials hardware ports), a crystal oscillator 16 Mhz, a USB connection , a power jack and a reset button.

Because of the need of a great amount of I/O digital, we have decided to use Arduino for the piloting of six servomotors, six motor steppers with respective drivers and limit switches.

The bluetooth module used is the HC-05, that allows to transform a UART port known as serial one , in a bluetooth port. 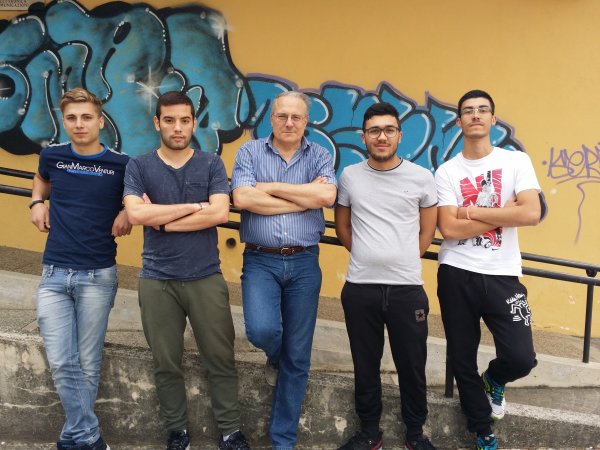 Although the activity has been done inside the new subject “technology and design of electric and electronic systems (new denomination of the old TDP), practically this project was carried on by a restrected group of students, with the help of the contact teacher Montanaro Felice.

The group of authors, called M@P Group - Music, Electronic and Passion is composed by: