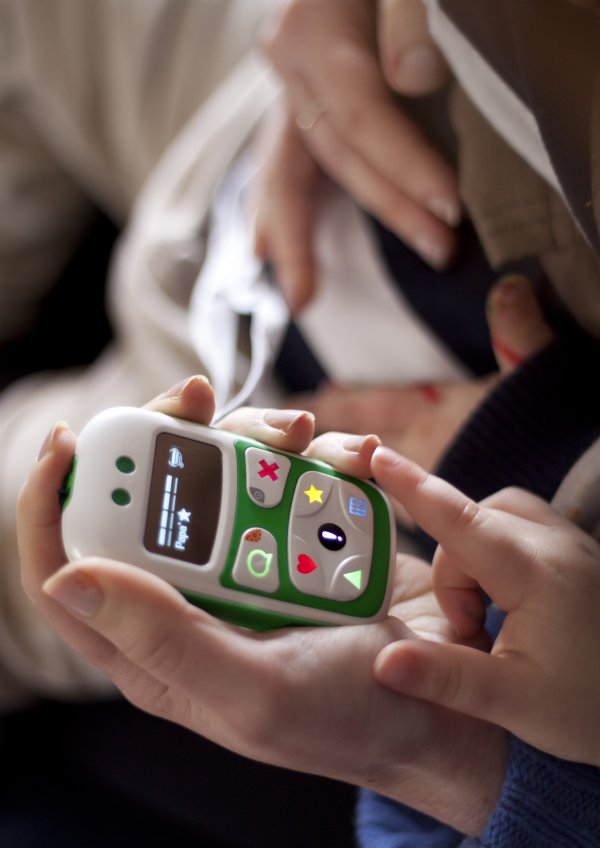 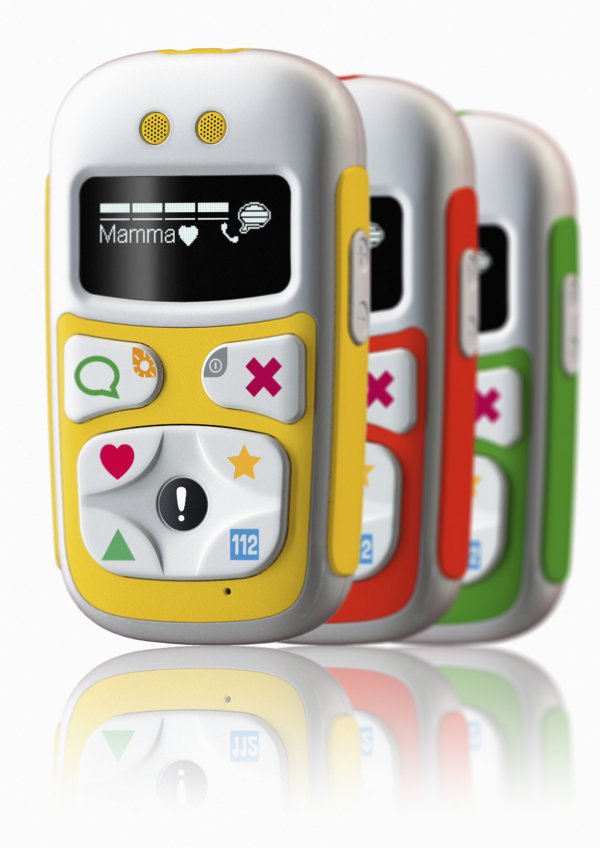 bPhone U10: the first cellphone specifically designed for children and their parents.

In todayâ€™s world, where technology is everywhere and communication tools are dramatically increasing, we asked ourselves: how can we contribute to increase childrenâ€™s safety and allow their parents to find them in no time?

Around this idea we made bPhone U10. bPhone is a real cell phone for kids, conceived and designed by 21am and launched by Giomax Corporation.

The two Italian companies have developed a new mobile phone, designed and certified for children from age 3 years: small, light, very resistant (kids-proof) and colorful but more important with dedicated functionalities designed with care:
- The device allows a child to receive calls and make calls only to three numbers, pre-set by their parents plus the European emergency number, by using large buttons that, through shapes and colors, are understandable even by preschoolers.
- Under its cute & colorful shell, bPhone U10 reveals an efficient tracking system based on GPS and LBS technology: by using only one of the 3 numbers saved on the bPhone, you can send to the bPhoneâ€™s number an SMS with the word "FIND" to activate the locator. In return youâ€™ll receive a text message which indicates its location (you will receive a link that points to google maps).

The limited features are a specific choice so that bPhone can be an important tool in order to support parents to educate their children on the right way to use a mobile phone, especially for their future application of more complex devices, such as modern smartphone. bPhone U10 is a friendly mobile device for children but it is also an ally for their parents and for their serenity.

bPhone U10 is available now at â‚¬ 59.99 and itâ€™s distributed by Datamatic and Uragme for Pharmacies channel. Find out more about bPhone U10 on our website www.mybphone.com

Adam James Cavallari was born in 1982 in Coventry, England. He arrived in Italy in 1986 where he received an art education and graduated at the L.A.S. Art College in Bergamo. In January 2006, a few weeks after he accomplished a degree in Industrial Design at Politecnico di Milano, he started working for 3 Italia, part of the Hutchinson Whompoa Group. In 3 years, he was responsible for product & interface design and worked on over 30 new mobile devices side-by-side with global manufactures such as LG, Samsung, Huawei, Sony, ZTE and many others. He left his job position in 2009 working with Hutchinson and other International companies as a freelancer. In 2010 he designed for 3 Italia the WebCube, the first Wi-Fi router with 3G module that was honoured with many awards and was displayed in the Triennale Milano as representative of italianâ€™s innovation in the industrial design field. In April 2010 he founded 21am, a design consultancy firm that since its early days designed and developed several products such as mobile phones, Wi-Fi routers, general consumer electronics and several interfaces, mobile apps and complex IT infrastructures. In his spare time, usually during his travelling, he writes novels. He published 2 books, both fiction, â€œLâ€™Ultima lacrima di tÃ©â€ and its latest manuscript, a historical novel set in Japan called â€œBushidoâ€.

Andrea Alessandri was born in Jesi (Italy) in 1980, since 1999 he is living in Milan. Graduates in Industrial Design at Politecnico di Milano, attending the Collegio di Milano, too; in 2005 he starts working for Castaldi Illuminazione in the new product development unit. Following his thesis work, continues the research activity in the field of lightrail desing with some articles for Lightrail.nl, Ingegneria Ferroviaria and CityRailways, while starting collaborations with Italian and Austrian companies for product design, as a freelance. In 2009 is awarded for the â€œLED Light Exhibition Designâ€ competition with two projects, not finalized; starts collaborating with Adam James Cavallari, together with in 2010 establishes S5Design; deals with product development for a new ESL (Electronic Shelf Label) project by S5Tech in collaboration with CINFAI. In 2012 he and Cavallari transform S5Design in 21am, a product design and development firm devoted to innovation; in 21am he continues and enrich his research on technologies and materials, activity that often turns into products developed in-house. For 21am he dealt with the development of more than 30 new products. Since 2011 he is dealing with digital fabrication, involved in the debate on the potential business models that may be applied to Makers start-ups and FabLabs within the Make in Italy initiative. Starting form 2011 he is volunteering for FAI - Italian Heritage Fund, he managed events involving a total of more than 100.000 people and started two acquisition and restoration projects.

Pietro Paolo Rimonti born in Naples on September 26th, 1958. Married, with two sons. After graduating with full marks in Electronics Engineering at Naples University, he starts his professional career in Olivetti. In 1988 he is appointed as Business Development Manager in SGS Thomson in Hong Kong branch office. In 1991 he is Business Unit Manager of Telecom Consumer Division in the Italian branch of Ascom Safnat company, the Swiss major telecom manufacturer. Mobile phone segment. In 2001, he developed two innovative systems: sell-in sell-out and after sales service. This system will be chosen as case study by the Milan Polytechnic University and published by Hoepli in the book â€œRiprogettare il Servizio Post Venditaâ€(Reprojecting the Post Sales Service) written by Sergio Cavalieri. In 2002 obtains the Master in General Management by SDA Bocconi School of Management. In 2005 he is selected among 30.000 manager and is awarded the â€œPremio Eccellenzaâ€ (Excellence Prize) by ManagerItalia. In 2006 he is appointed as Vice President Telecom Network Division of Samsung Italy. In June 2009 he is appointed as Senior Vice President by Mywave Electronics Italia. On January 17th 2011 he established his own company Giomax Corporation ideas company.