It's a huge 3D printer, with a printing volume of a full cubic meter (one meter per side), aimed to Maker Spaces, FabLabs, shops and to individuals who simply want to print large object in one single print - while keeping the price tag to no more than a desktop commercial 3D printer.
The prototype already works and will be polished in time for the exposition; it has been designed as a "hack-it" kit to let people easily customize it, make it bigger (or, why not, smaller) and it's made of as less parts as possible, this to assemble it in less than an hour; we're using 3D printed parts where possible! And open-source software, too, not to mention the best hotends on the market.
The basic idea is to let anyone who want a big 3D printer to get one, with few costs and very good print quality. Photos and videos speak for themselves!
Italy
WEB FACEBOOK TWITTER 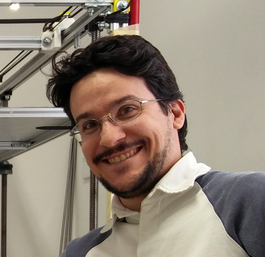 I'm a Computer Science student and a longtime tech enthusiast, I've been interested in the 3D printing world since the first RepRaps came out and after using some common desktop 3D printers I've decided to try and build a huge one. That's why I've built my NazzaBot!
#3D printing #Fabrication
C6 (pav. 8) - Edoardo Mazzaracchio
2016
Back Data updated on 2022-11-08 - 10.59.34 am