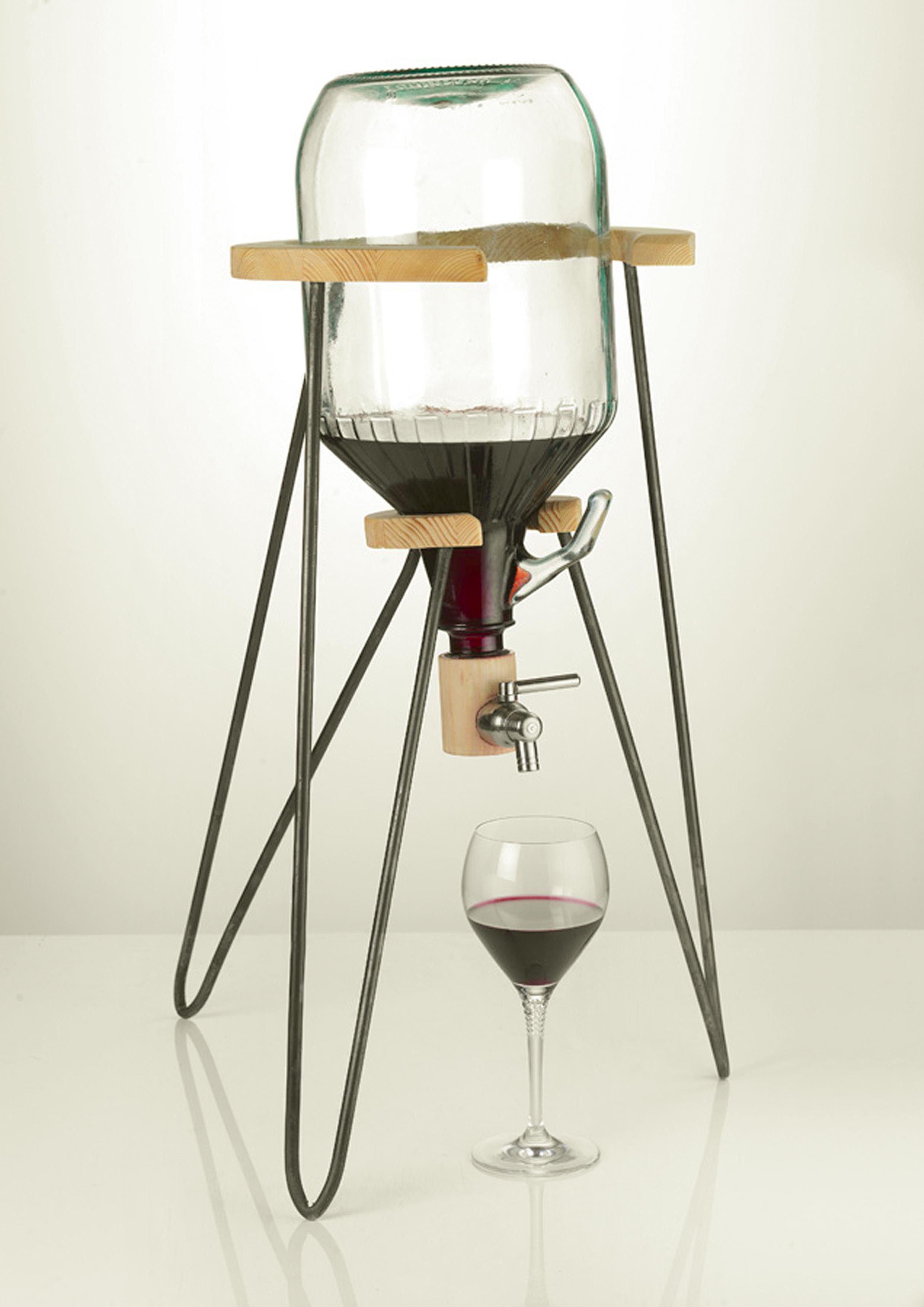 Drop System is a product conceived and realised with the aim of permitting everybody to pour liquids easily and fast, each day. It has been created especially for those consumers, who, because of oldness or motor difficulties, consider the action of pouring liquids (water, wine, oil, etc.) difficult. However, it is suitable for wine companies, restaurants and dinners with friends as well. This device allows leaking any liquid from a 5 liter (and more) demijohn and it is made up by a structure and a faucet, which has to be screwed to the demijohn. The structure consists of an iron tripod, manually operated or laser cut (which permits to personalize it). The wood elements, applied to this structure, are useful to a “soft” support of the glass demijohn. This structure has two versions: the standard one, which has a simple form and on average it has a low cost (it is mostly an industrial production); the other one is customizable, with laser cut fantasies and the use of a more refined wood manually operated (it is mostly an artisan production). The element that permits the good operation of the system is the top/faucet, which is screwed on the demijohn’s thread and it is fundamental to the leak of the liquid. Now, this element has been printed in 3D in ABS or PLA and other stainless steel prototypes are about to be developed. There is a research on the possible solutions in order to reach a greater number of consumers, using the system not only for 5 liter demijohns, but also for liquid containers of different sizes on the market. It is studied the development of the integrated electronic parts, which permit, through a display, to verify the quantity, the typology and the nutritive elements of the poured and ingested liquid.
Italy

Marco Armoni
is a designer born in Camerino on 3rd December 1987. He took a Bachelor’s Degree in “Industrial and Environmental Design” at the College of Architecture of Camerino and then he took a Specialist Degree at the College of Architecture of Firenze. After a training period at a studio of architecture and at the FabLab of Budapest, now he works as a designer at “Spazio361”, a workshop of design, prototyping and carpentry in San Severino Marche.

Emanuele Ticà
was born in San Severino Marche in 1981.
Before opening his own workshop, he practiced for many years in other workshops with the masters of his town. He has lived for one year in Norway and then he decided to attend the School of Fine Arts in Italy. Meanwhile, he was working for important restoration companies in order to learn the theoretical notions and to gain experience, which are necessary to work on his own. He graduated in “Theory and Technique of Conservation of Cultural Heritage” at the School of Fine Arts of Macerata in 2011. Since 2001, he works on restoration of wood and carpentry. Since 2011, he is the owner of “Mastro T”, which is his workshop of restoration of wood and painting, carpentry and design. In 2015 he was accredited as Restorer of Cultural Heritage by the Superintendence of Urbino and he moved to “Spazio 361” in order to share with other experts the place, knowledge, tools and competence. This synergy of different minds and hands creates the project “Wood About”.

Marco Quacquarini
alias Fantawood, was born in Tolentino in 1983. Since childhood, he has frequented his grandfather’s workshop who was a carpenter and day by day, he has learnt to love wood. He developed his professionalism and competence thanks to his work experiences: at the factory, at the reception of museums, in the field of biological agriculture; finally, he has been an organizer of events as well. Then he understood that his inclination was to work freely and with his hands. In 2014 he has opened a workshop of carpentry and design through which he expresses his creativity and passion for wood. In 2015 he has created the project “Wood About” together with “Mastro T” and “Armoni design”.
A45 (pav. 8) - Wood About
2016
Back
Data updated on 2020-12-13 - 11.41.04 pm