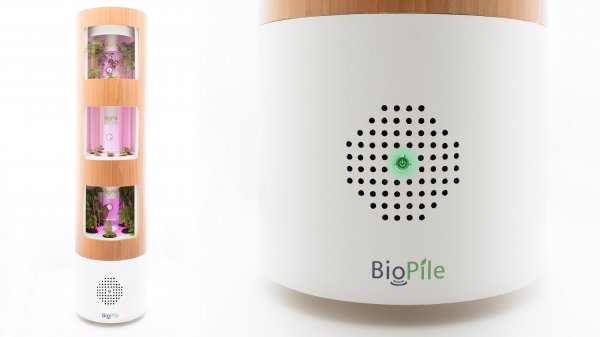 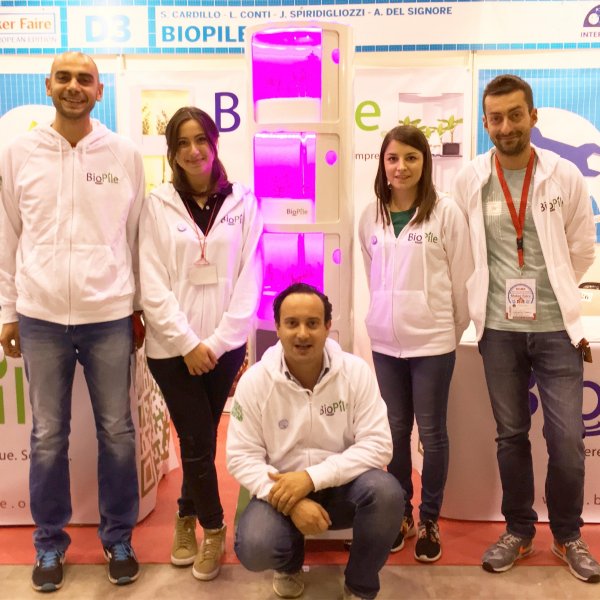 BioPile is a hydroponic incubation and growth device for plants and plants.
The cylindrical shape is developed upward by stacking several growth cells on a base containing a water tank and electronic analysis and feeding apparatus. The cells are modular and interconnected to the water and air recirculation system Of the cells is installed a drainage tank for individual crops, a network of temperature and humidity sensors and a system of UV and infrared growth lamps.
The base, identical in shape and size to the smallest of the three available cells, contains a 9 liter plastic water tank equipped with a submersible pump and an oxygenator. Inside the base are the electronic components that run the entire BioPile Â© system, including a 220V to 24V power adapter and transformer, a computer board, a fan and a switch. The drainage tanks in each cell contain 1 , 5 liters of constant recirculated water, a temperature sensor, and 3 to 7 plastic baskets in the liquid level at which a non-woven fabric bag containing the seeds of each plant is placed in a winding wrap Coconut fiber and mineral wool.
The high and low part of the cells has two interlocking connectors, one carries water, the other connects the power of the LEDs. Inside the cells are installed the light emitters and the temperature and humidity sensors. Two concentric holes allow the flow of air to drop from the first to the last of the modular cells up to the suction fan located in the base. The computer card placed in the active base and adjusts the flow of the pump and fan according to the number of stacked cells Above, it receives from the sensors data related to temperature and humidity by autonomously regulating the ventilation and periods of ignition of the growing lights for each individual culture according to the type of bags it hosts. Each type of seed catalog the bags provided on Required by BioPile Â© according to a pattern dictated by growth time, required temperature, adequate moisture and mature vegetable height. The only data to provide to the system is the number or the name of the bag, the pre-programmed card will adjust the adhoc cell functions for each crop plan. For example, "cell 1 - type M - start". Each cell can accommodate bags carrying the same semen seed or seeds compatible with each other for a period and growing chemical needs according to the vertical dimension that the plant commonly reaches maturation . Cells of 35cm, 50, 90cm, 3, 5 or 7 grafts are provided. The user can modify both the cell array order and the position of the baskets from the bottom to the higher during the growth, to use the plants matured by grasping them directly from the cell or interrupting them at any time the permanence to implant them in soil to ' Outside simply by removing the entire basket that will act as a jar. Modularity, computerized analysis of biochemical crop data, constant air and water recirculation make BioPile Â© a highly automated, fully independent automation system and immune to external factors such as pollution, temperature, season or climatic events that can affect the natural Vegetable growth curves. The health of the home environment where a BioPile Â© is housed is guaranteed by the airflow system, the fan in the base through the cells aspires from the top of the room the warmer and saturated air Of carbon dioxide by crops which, for photosynthesis induced by light emitters convert CO2 into oxygen, the resulting air flow, oxygen load, is reintroduced from the external environment from the base after cooperating with constant oxygenation of the water In the tank. The input passage into the system and output at the end of oxygenation occurs through two active carbon filters which eliminate the emission of unpleasant smells, oxygen-rich air is monitored by a gas sensor connected to the control.
Italy
WEB FACEBOOK 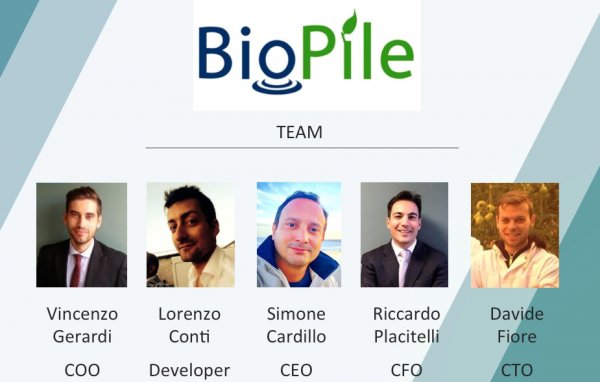