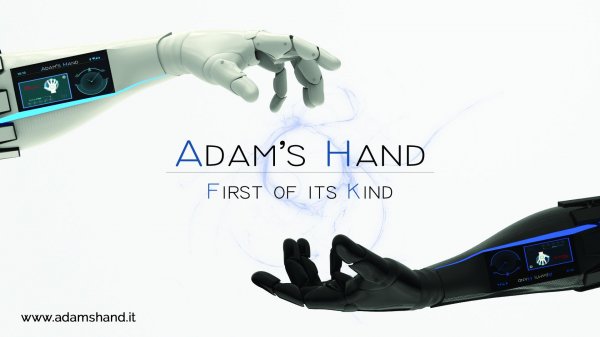 Adamâ€™s Hand is a myoelectric hand prosthesis for amputees or people with congenital upper limb deficiencies.
Adamâ€™s Hand is based upon a patent pending mechanism that allows the actuation of all the five fingers with just one motor (instead of the 5-6 motors generally used in other prosthesis): this allows us to save on cost, weight and dimensions of the device and leads to an extremely simple control for the user. 3D printing is used to realize the outside cover of the device, which is highly customizable and can then fulfil the most varied demand.
Italy
WEB FACEBOOK TWITTER 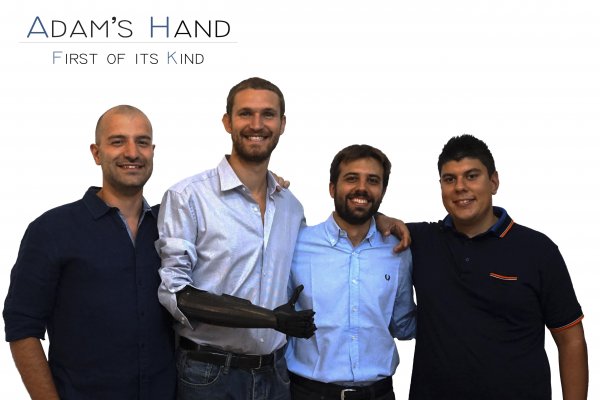 Giovanni Zappatore is a Mechanical Engineer. He is the CEO and Founder of the research project. He deals with strategic choices, technical and commercial partners research and acquisition of the technologies needed for the device development. He develops Adamâ€™s Hand mechanics and is in charge of its prototyping and of its continuous development.
In 2010 he was among the 18 students who won the ISUFI scholarship, excellence institute linked to the University of Salento, in which he attended many advanced multidisciplinary courses. In 2014 he graduated in Industrial Engineering with a thesis regarding the study of the human hand kinematic, which stimulated his interest in the issues experienced by upper-limb amputees. From 2014 to 2016 he took part in Salento Racing Team, a university project that brings together students of several faculties with the aim of designing and realizing a Formula SAE vehicle. In that context, as senior member of the dynamic group, he was in charge of the vehicle CAD modelling and developed team-working and problem-solving capabilities. With Salento Racing Team he also took part in three international competitions in Spain and Italy, that gave him the opportunity to deal with court judges and students coming from all over the world. In 2017 he graduated in Mechanical Engineering in the University of Salento with an experimental thesis regarding the design of the innovative mechanism on which Adamâ€™s Hand is based, for which in the meantime he submits a patent application. In 2017, together with his Co-Founders Matteo Aventaggiato and Federico Gaetani, he founds BionIT Labs, with the aim of Changing disabilities into new Possibilities.

Matteo Aventaggiato is a Biomedical Engineer and the CTO of BionIT Labs. As Co-Founder of the project, he develops Electromyography Signal Processing Techniques (EMG) and algorithms to extract information, and supports the project by defining the technical specifications of electronic modules for bio-potential sampling. He also works on the drafting of the technical documents which, at the end of the project, will be integrated for the establishment of the Technical File.
In 2008 he graduated in Biomedical Engineering at the Politecnico di Torino with an experimental thesis focusing on surface EMG signal analysis, performed at the Neuromuscular System Engineering Laboratory (LISiN). Attracted by the International Research fields and excited by his excellent results, articles published in international journals and presentations held during International Congresses, he continued his scientific activities at LISiN for about 3 years, until in 2011 he established its own Consulting office. Thanks to the skills and continuous training in the field of computer analysis of biomedical signals and images, he has found immediate feedback by establishing significant and prolonged collaborations with important Italian companies operating in the Research and Development of biomedical devices. Since 2012, he has been working intensively with two spin-off startups of CNR, Echolight and AMOLAB for the research, development, validation and certification of biomedical devices based on the use of ultrasound and bio-image processing.

Federico Gaetani is an Information Engineer and the CIO of BionIT Labs. As Co-Founder of the project, he deals with the technical design and development of electronic and informatics solutions integrated into Adamâ€™s Hand. He designs the power supply, the control and management electronic boards and the electromyographic signal acquisition system. He also deals with the software development and supervises the development of IT platforms used for the device management.
In 2013 he attended the IFTS course (Higher Education and Training), during which he extended his knowledge in the field of Information and Communication Technology (ICT). From 2015 takes part to the University project â€œSalento Racing Teamâ€, which combines students of various faculties in order to design and build a Formula SAE competition car, as a member of the electronic division. In 2016 he took part in the Italian competition at Varano De Melegari, which gave him the opportunity to relate with race judges, automotive professionals and students of other universities. In 2016 he also became the electronics division Leader and in 2017 the Technical Leader of the Team. In that context, he developed team-working, problem-solving and team-leading capabilities. In 2017, he obtained the Bachelor's Degree in Information Engineering at the University of Salento with an experimental thesis on the design of Adamâ€™s Hand electronic control system. Since September 2017 he is attending the course "Communication Engineering and Electronic Technologies" in the University of Salento, with the aim of extending his knowledge by specializing in the telecommunication and electronic fields.

Dario Pianese is a Finance Expert and the CFO of BionIT Labs. As Co-Founder and CFO of the project, he takes care of the Administration, Financial and Control activities, supporting the CEO in the strategic decision process and in the communication with Adamâ€™s Hand stakeholder. During the development of the project he deals with fundraising, developing a planning and control system, monitoring the consistency between the existing regulation and the company process, and continuously improving the financial performance of the company.
After the Bachelorâ€™s Degree in Business Economics obtained in 2009, he attended a Master in Accounting, Auditing and Control at the L. Bocconi University in 2011; he immediately ventured into the renewable energy sector, a field in which he began to form his corporate culture, and then became part of the financial advisory team for primary lenders and then responsible for Administration, Finance and Control for photovoltaic assets of an investment fund. In 2014 he underwent an important motorcycle accident, after which he became a right leg amputee: from that moment he began to understand the problems faced daily by amputated subjects, and he became an active part of the representation that in 2018 will establish a non-profit association to protect the amputeeâ€™s category.

Fabio Dellâ€™Onze is a 3D Generalist and a Graphic Designer. He is a team member of BionIT Labs and deals with the aesthetic design of Adamâ€™s Hand, together with the modelling of some components of the prosthesis.
In 2004 he obtained the Senior High School Degree in Information Technology, and from 2001 to 2013 he worked as tourist resort entertainer in several Apulian holiday villages, becoming Chief Entertainer in 2006. In this context, he dealt with the organization of the recreational and entertainment activities and he managed several entertainment teams. This experience proved to be crucial for him in order to acquire self-confidence and to learn how to interact with the public, and also to develop Team leading and Problem solving capabilities by facing all the challenges linked to the management of a big team and the needs of each team member. Been fond of Digital Art, new technologies and their evolution, in 2010 he attended the Master in Computer Graphics at the Italian BigRock Training Center, where he learned to work with Autodesk Maya software, obtaining several official European certifications. In 2014, together with his colleague Duilio Madaro, he founded DAF - Digital Art Factory, a company operating in the field of Computer Graphics.

Duilio Madaro is a 3D generalist and a Graphic Designer. He is a team member of BionIT Labs and deals with the production of the information material and the advertising of the Adamâ€™s Hand project, by realizing audiovisual material, developing the corporate image and managing the projectâ€™s social networks.
From 2001 to 2008 he worked as tourist resort entertainer in several holiday villages, developing Team Working capabilities and the ability to work in a stressing and demanding environment. Meanwhile, from 2005 to 2008 he also worked as sales personnel in Mediaworld, where he learned how to advertise and sell many high-tech devices. In 2010 he attended the Master in Computer Graphics at the Italian BigRock Training Center, obtaining several certifications linked to Autodesk Maya software, to Character Rigging, Character Animation and MEL programming. In 2012 he graduated in "Scienze e Tecnologie delle Arti Figurative, della Musica, dello Spettacolo e della Moda" (STAMMS) with an experimental thesis regarding the reconstruction and 3D modelling of the Church of Saint Anthony of Padua located in NardÃ² (LE). In 2014, together with his colleague Fabio Dellâ€™Onze, he founded DAF - Digital Art Factory, a company working in the field of 2D and 3D Graphics and Motion Graphics.

Simone Casciaro is an Industrial Engineer. He is CEO and Founder of a hardware startup called QOOWEAR.
With his team, he is building the first thermal wear controlled by artificial intelligence, which is able to automatically change its temperature basing on external weather conditions. The AI-controlled thermal wear is the first product within the QOOWEAR developmentâ€™s timeline, which consists in pressurized suites, exoskeletons and other technologies at the intersection between wearables and smart textiles.
Simone Casciaro is a 2Â° generation entrepreneur who spent 7+ years as Corporate PR and Business Development within his family businesses, which in the last 40 years were focused on: Constructions (restoring Castles, Churches, Ministry buildings, and more); Energy (projecting +80MW of Photovoltaic and Wind Farms); Real Estate. Then he spent 2+ years boosting his Salesâ€™ skills in external Corporations within real estate, energy and telecommunication markets. He started his first startup at the age of 23 and he is now Business Advisor for startups funded by under-30 talents and focused on AI, Hardware and Health. Adamâ€™s Hand is one of the startups that Simone Casciaro advice. He is expert in Business Development, AI, Wearable technologies and Crowdfunding, and his Companies got Academic coverage on LUISS Business School and John Cabot University (in Rome), alongside national and international Press coverage on Futurism, GQ, LaStampa Tech and more.
#3D printing #Home Automation #Internet of Things #Robotics #Wellness & Healthcare
D5 (pav. 6) - Adam's Hand
2017
Back Data updated on 2022-11-08 - 10.59.34 am