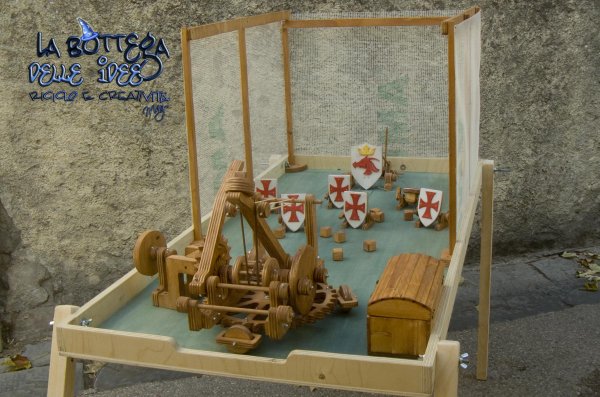 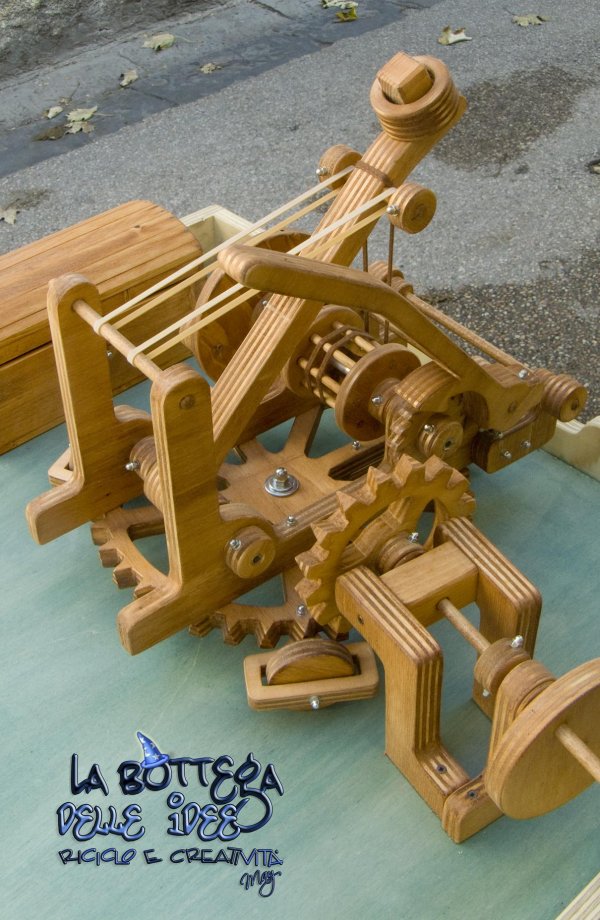 The goal of the game is to knock down six opponents, "The Knights", by launching wooden blocks using a catapult, only after knocking down all of the six knights, is it possible to knock down the seventh and last target, the King and finish the game.
Catapult uses a "conical torque" gear to change the direction of the throw. 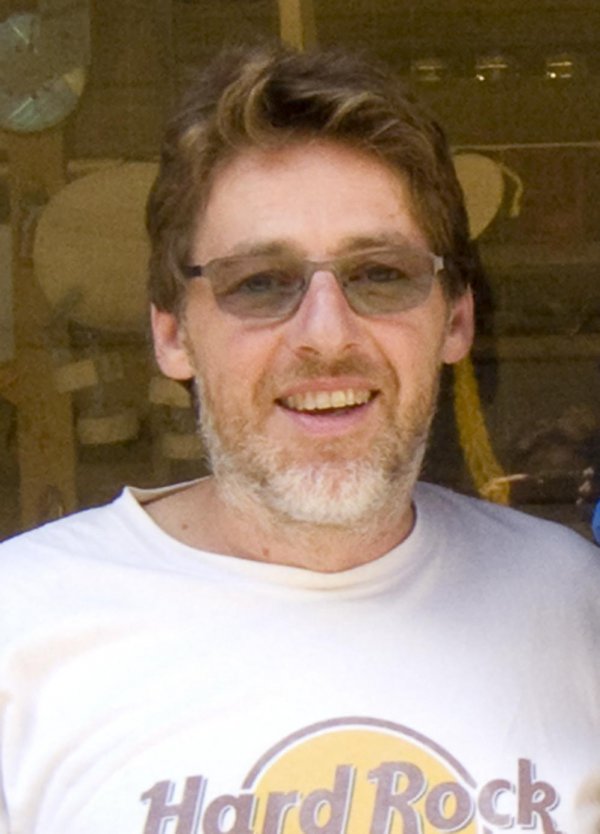 My name is Massimiliano Aiazzi and I was born on the 23rd August, 1968. After finishing school, I abandoned everything to dedicate myself to â€œmusicâ€, the greatest love of my life.
For nearly thirty years, I immersed myself in the music scene, from composing to concerts, soundtracks to Backliner, but after a meeting with Domenico Modugnoâ€™s pianist, M. Marcello Faneschi, the real breakthrough came.
A collaboration, which started over twenty years ago, and still continues today, which gave me the opportunity to learn the art of composing, after which I could finally devote myself to writing "symphonic music" for soundtracks.
Later, when I realized with regret that the music I was writing was no longer suitable for the modern world, I decided take another route.
Iâ€™ve always considered music to be a sort of game, a way to give vent to creativity, so one morning, still as a sort of game, after finding an old phone in my hands and creating a table lamp out of it, I came up with the idea of â€‹â€‹opening "La Bottega delle Idee" (â€œThe Workshop of Ideasâ€), a place where creativity could venture out in all its varied forms. Making things has always been an integral part of my life and so I tried to put it to fruition.
The creation of objects from recycled wood immediately began to bear fruit, both in terms of interest to the public as well as personal satisfaction. But I still felt there was something missing.
Over time, I began to create the first simple "toys" until one day, driven by the passion for the Renaissance period and above all the genius Leonardo Da Vinci, I wanted to create a game that used Leonardian gears. "The Elastic Machine F = kÎ´", was born after a few monthsâ€™ work: a model car driven by a pair of elastic bands and Leonardoâ€™s "Lantern" gear mechanism.
My imagination took off! I started thinking of more complex games and when I saw an old pinball machine at an antiques market, a light bulb was switched on, so to speak. After a few months the first "7th Quadrant" pinball machine was ready. Then the "Il Castello", "Il Drago" and "La Catapulta" pinball machines followed, all of which are handmade using recycled wood or leftover woodworking scraps, all inspired largely by Leonardo's mechanisms.

Hereâ€™s an article by the journalist, Luigi Franchi, on the blog "www.solobellestorie.it" entitled "If you could open a shop" that sums up the philosophy behind "La Bottega delle idee".