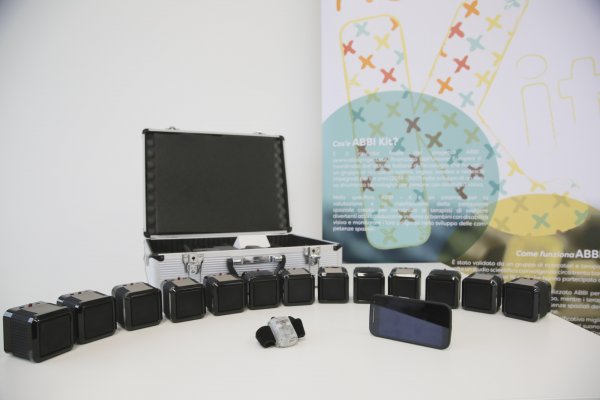 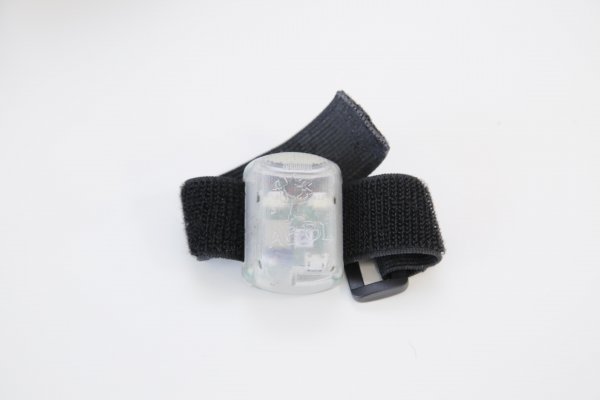 ABBI-K is a technological system specifically designed for blind children for the evaluation and rehabilitation of spatial perception. The device has been developed by the research lines U-VIP (Unit for Visually Impaired People) and RBCS (Robotics Brain and Cognitive Sciences) of the Italian Institute of Technology in collaboration with other universities for the european project ABBI (Audio Bracelet for Blind Interaction) coordinated by the Italian Institute of Technology (FP7-ICT-2013-10-611452). The system is composed by a wearable electronic bracelet (ABBI) that produces sounds when moved and gives precise information about body position in space, and an evaluation kit (K) that can be used to assess le level of spatial competence of visually impaired children. The main idea behind the ABBI-K is that it is possible to assess spatial perception with the kit before and after the rehabilitation training with ABBI. The system has been validated with a clinical trial performed with 40 children aged from 3 to 18 years old in collaboration with rehabilitation centers located in Italy (Istituto David Chiossone per ciechi e ipovedenti, Genova; Centro Regionale per l’ipovisione in età evolutiva IRCSS E. Medea, Lecco; IRIFOR del Trentino, Trento). The main result of the clinical trials is that the spatial performance of the group of children who used the bracelet during the rehabilitation training drastically improved in three months. Since the positive results of the european project ABBI, the procedure to make ABBI a medical device has been started.
Italy
WEB TWITTER

Monica Gori: Monica Gori graduated in Psychology at the University of Florence in 2004 (cum laude). From 2002 to 2006 she worked at the CNR of Pisa in David Burr’s Laboratory. She did her PhD in January 2009 at University of Genoa on Humanoid Technologies supervised by David Burr and Giulio Sandini. During her PhD she interacted with a strong multidisciplinary environment starting collaborations with engineers and clinical institutes (e.g. Chiossone Institute and Stella Maris Institute). In 2008 she worked in Martin Banks lab (Berkeley, California). From 2009 to 2013 she did a Post Doc at the Robotic, Brain and Cognitive Sciences (RBCS) department at the Istituto Italiano di Tecnologia. During this period she started important collaborations with prof. Juergen Konczac (Minnesota University, USA) and with prof. Melvin Goodale (Ontario University, Canada). She is now tenure track reseracher leading the Unit U-Vip: Unit for Visually Impaired People at the Istituto Italiano di Tecnologia. Monica Gori is an expert of development, multisensory integration, rehabilitation and visual disability. The impact of her work on the scientific community can be summarized by 60international papers, 2 book chapters and many conferences' abstracts. Internationally accepted indices of impact and productivity shows that her work has received 734 citations, leading her to an H-index of 14 in Scopus (http://orcid.org/0000-0002-5616-865X). In 2014, she was awarded the ABBI project (FP7, ICT-2013.5.3, contribution of about 2 millions) and in 2016 she was awarded the WeDraw project (H20202, ICT 22-2016, contribution of about 2.5 millions). In both she is the scientific coordinator. One of her works has been listed in faculty of 1000 (Gori et al. Curr Biol, 2008) and in 2012 she won the TR35 price for young innovators.
Giulia Cappagli: Giulia Cappagli studied Experimental Psychology and received her Master of Science in Psychology from the University of Florence in Italy (2012 - Prof. David Burr) with a thesis regarding the influence of the regression to the mean phenomenon on time perception in musicians. She became licensed Psychologist after one year of formal traineeship spent both at the University College London UCL in London, United Kingdom (Centre for Research in Autism and Education – Prof. Elizabeth Pellicano) and at the Institute of Neuroscience INS in Florence, Italy (Prof. Stefano Pallanti and Roberto di Rubbo). She obtained and successfully received a Ph.D. in Bioengineers and Robotics from the University of Genoa affiliated with the Italian Institute of Technology (2017 – Prof. Giulio Sandini and Monica Gori). During her Phd, she actively worked at the European project ABBI (Audio Bracelet for Blind Interactions). The project aimed at assessing spatial perception in children and adults with visual impairments and to rehabilitate the impaired aspects of spatial perception by developing an audio bracelet that provides auditory feedback of body movements. For more info, please visit the website ( https://www.abbiproject.eu/ ) or email the collaborators.
Currently, Giulia is working on the European project weDRAW (https://www.wedraw.eu/) which aims at exploiting the best sensory modality for learning arithmetic and geometrical concepts based on multisensory interactive Information and Communication Technologies and serious games. Her research interests cover a range of topics related to assessment and rehabilitation of spatial perception in visually impaired individuals, time perception in specific population such as musicians and autistic individuals, music therapy for developmental diseases. She was awarded a diploma with top marks in Music (Saxophone) from the Conservatory of La Spezia and a diploma in Music Therapy funded by the European Social Fund (ESF).
Chiara Martolini: Chiara Martolini was born in Pisa (Italy) in 1990. She obtained her Master degree in Biomedical Engineering from School of Engineering, University of Pisa, in 2017 with the thesis "Optimization of experimental audio-motor assessment of visually impaired people". The project was developed at the Italian Institute of Technology (Genoa) under the supervision of Dr. Monica Gori, Unit for Visually Impaired People, and it was part of project " ABBI - Audio Bracelet for Blind Interaction", founded by by the European Commission under The 7th Framework Programme (FP7-ICT-2013-10).
In 2017 she started her PhD course in Bioengineering and Robotics, "Cognitive Robotics, Interaction and Rehabilitation Technologies" curriculum, held by the University of Genoa in collaboration with the Italian Institute of Technology. She was involved in the the supervision of Dr. Monica Gori (Unit for Visually Impaired People), dealing with multisensory development in visually impaired individuals, in particular children, to enhance their sensorimotor abilities necessary to orient and move in space.
#Wellness & Healthcare
A28 (pav. 4) - Monica Gori
2018
Back
Data updated on 2020-12-13 - 11.41.04 pm