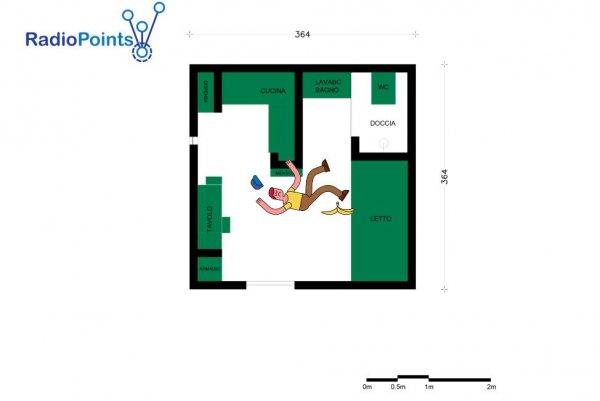 This RF-based human activity recognition system is not based on the use of smartphones or wearable sensors, hence it does not require collaboration from the monitored person. In particular, this system allows to:
1) detect human presence;
2) count the number of people or the crowd density in a given area;
3) recognize the type of activity of a single person

-Mauro De Sanctis received the â€œLaureaâ€ degree in Telecommunications Engineering in 2002 and the Ph.D. degree in Telecommunications and Microelectronics Engineering in 2006 from the University of Roma â€œTor Vergataâ€ (Italy). From the end of 2008 he is Assistant Professor in the Department of Electronics Engineering, University of Roma â€œTor Vergataâ€ (Italy), teaching â€œInformation Theory and Data Miningâ€. In April 2017, he received the Associate Professor habilitation (Italian National Scientific Habilitation - ASN 2016) from the Italian Ministry of University and Research for the scientific sector of telecommunications.

He is serving as Associate Editor for the Signal Processing and Communication in Aerospace Systems area of the IEEE Aerospace and Electronic Systems Magazine and as Associate Editor for the Command, Control and Communications Systems area of the IEEE Transactions on Aerospace and Electronic Systems. His main areas of interest are: wireless terrestrial and satellite communication networks, data mining and information theory. He published more than 90 papers on journals and conference proceedings, 4 book chapters, one book and one patent. He was co-recipient of the best paper award from the 2009 International Conference on Advances in Satellite and Space Communications (SPACOMM 2009).

Ernestina Cianca is Assistant Professor at the Dept. of Electronic Engineering of the University of Rome Tor Vergata, where she teaches Digital Communications and ICT Infrastructure and Applications (WSN, Smart Grid, ITS etc.). She is the Director of the II Level Master in Engineering and International Space Law in Satellite systems for Communication, Navigation and Sensing. She is vice-director of the interdepartmental Center CTIF-Italy.
She has worked on wireless access technologies (CDMA, OFDM) and in particular in the waveforms design, optimization and performance analysis of radio interfaces both for terrestrial and satellite communications. An important part of her research has focused on the use of EHF bands (Q/V band, W band) for satellite communications and on the integration of satellite/terrestrial/HAP (High altitude Platforms) systems. Currently her main research interests are in the use of radio-frequency signals (opportunistic signals such as WiFi or specifically designed signals) for sensing purposes, and in particular. Device-free RF-based activity recognition/crowd counting/density estimation and localization; UWB radar imaging (i.e., stroke detection). She is author/co-author of 130 papers in international journals and conferences.

Tommaso Rossi received the â€œLaureaâ€ Degree in Telecommunications Engineering in 2002 from the University of Rome Tor Vergata (URTV). He gained a Master of Science Degree in â€œAdvanced Communication and Navigation Satellite Systemsâ€ in 2004 and a Ph.D. in Telecommunications and Microelectronics Engineering in 2008 at the University of Rome Tor Vergata.
In 2009 he was visiting researcher at the Yokosuka Research Park (Japan), an international research centre focused on innovative telecommunications technologies. In 2012 he became Assistant Professor at the Department of Electronics Engineering of URTV. Since 2004 he teaches â€œDigital Signal Processingâ€ and â€œMultimedia Processing and Communicationâ€ for the Telecommunications/Internet Engineering Master Degree and â€œSignalsâ€ for Medical Engineering Master Degree.
In 2012 he joined the Interdepartmental Center for TeleInFrastructures (CTIF), a research centre of the University of Rome Tor Vergata, whose objective is to perform research in the field of inter-disciplinary applications of information and communication technology (ICT).
His present research activity is focused on EHF (Extremely High Frequency) and UWB (Ultra-Wideband) Terrestrial and Satellite Communications, Digital Beam-Forming applied to RF Imaging, Telecommunication and Navigation Systems, Digital Signal Processing.
He is currently Co-Investigator of the Italian Space Agency Q/V-band satellite communication experimental campaign carried out through the â€œTDP#5 Aldo Paraboniâ€ P/L (Technology Demonstration Payload) embarked on Alphasat satellite (launched on July 2013); this a joint ASI (Italian Space Agency) and ESA (European Space Agency) scientific program. In particular, he is responsible for analysis of fade mitigation techniques as adaptive coding and modulation (ACM), up-link power control and spatial diversity. Moreover, he is presently performing research on innovative beam-forming techniques applied to radio frequency ultra-wideband radar for medical imaging applications; in particular he is working on signal processing techniques for artefacts removal and multi-static microwave imaging space-time beam-forming (MIST).
He has been involved in the research activities of several projects funded by ASI, ESA, Italian Public Education Ministry and by major companies (e.g., Inmarsat, Space Engineering, Thales Alenia Space, Telespazio, etc.) where he gained experience on EHF satellite and terrestrial communications, signal processing, UWB radar, beam-forming and antenna array.
Tommaso Rossi serves as an Associate Editor of Space Systems for IEEE Transactions on Aerospace and Electronic Systems (T-AES). He is author of more than 80 papers, on international journals and proceedings of international conferences.