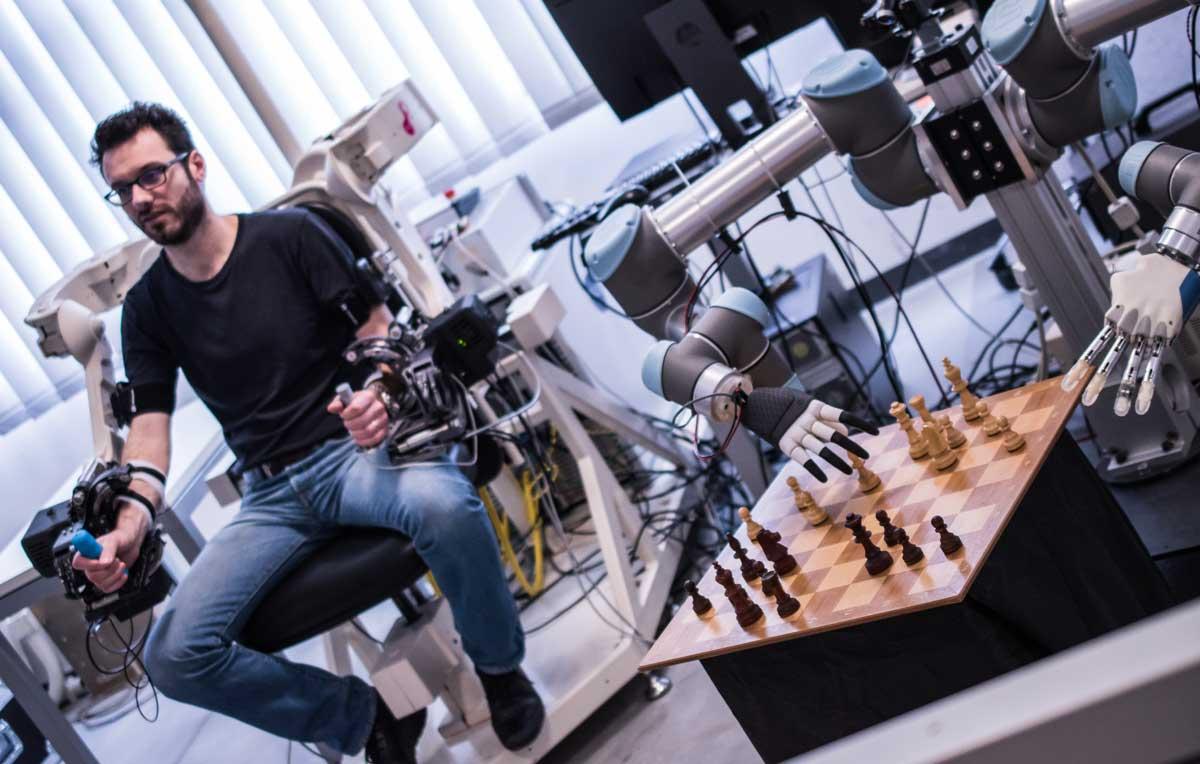 The Human-Robot Interaction area is a research area of the Perceptual Robotics laboratory (PERCRO) of Scuola Superiore Sant'Anna of Pisa, led by Prof. Antonio Frisoli.
Experimental activity involves force feedback exoskeletons, desktop haptic devices and wearable haptics. These robotic devices are being employed to replicate contact feelings during telepresence and immersive virtual reality scenarios.
The HRI group is also engaged in the clinical field by developing and applying innovative wearable robotic systems, coupled with immersive virtual environments, for neuromotor rehabilitation purposes and robotic assistance purposes.
Another experimental application field is the development of teleoperation interfaces for remote control of robots and inspection vehicles in remote or dangerous environments for the operator.

Antonio Frisoli (Eng., PhD) is a Full Professor of Robotics and Engineering Mechanics at Scuola Superiore Santâ€™Anna (SSSA), Pisa-Italy, where he is the Director of the Human-Robot Interaction area at PERCRO laboratory of TeCIP Institute and the Director of the macro-node of Artes center on Collaborative Robotics, that gathers more than 130 italian industries in the area of industry 4.0 enabling technologies. He received his PhD (2002) with honours in Industrial and Information Engineering from Scuola Superiore Santâ€™Anna, Italy and the MSc (1998) in Mechanical Engineering, minor Robotics, from University of Pisa-Italy.
Antonio Frisoliâ€™s research interests are in the field of human-robot interaction and cooperative/collaborative robotics, with particular focus on the design and control of wearable robotic systems, rehabilitation robotics, human motor control and haptic devices, virtual reality and teleoperation, advanced human computer interfaces for training, robot and intelligent machine design, robotic drones and unmanned vehicles for industrial applications.
He is an IEEE senior member and a recognized international expert in the international scientific community in the area of robotics and haptics, where he holds numerous positions in scientific boards and societies, such as ICORR society, Eurohaptics society, Technical Committee on Haptics and many others. He is Chief Scientifc Officer and co-founder of Wearble Robotics srl, a leading international company operating in the development and commercialization of new exoskeleton robots.
He has been responsible and PI of numerous scientific and industrial research projects for SSSA, including European and national projects.
In the field of robotics and haptics he acts as associated editor in numerous international journals, such as IEEE Robotics and Automation Letters and MIT Press Presence. and conferences, such as IEEE Worldhaptics, IEEE Roman, IEEE Haptic Symposium among many others. He has been the general chair of the Eurohaptics 2018 conference in Pisa and has been the former chair of the IEEE Technical Committee on Haptics (2012-2014) and Human-Machine Interaction summer school HMISS 2017.
He is author of more than 300 papers in peer-reviewed international conferences and scientific journals, he has been acknowleged among the top italian scientist. He has a google scholar h-index of 34 with more thna 4,000 citations.