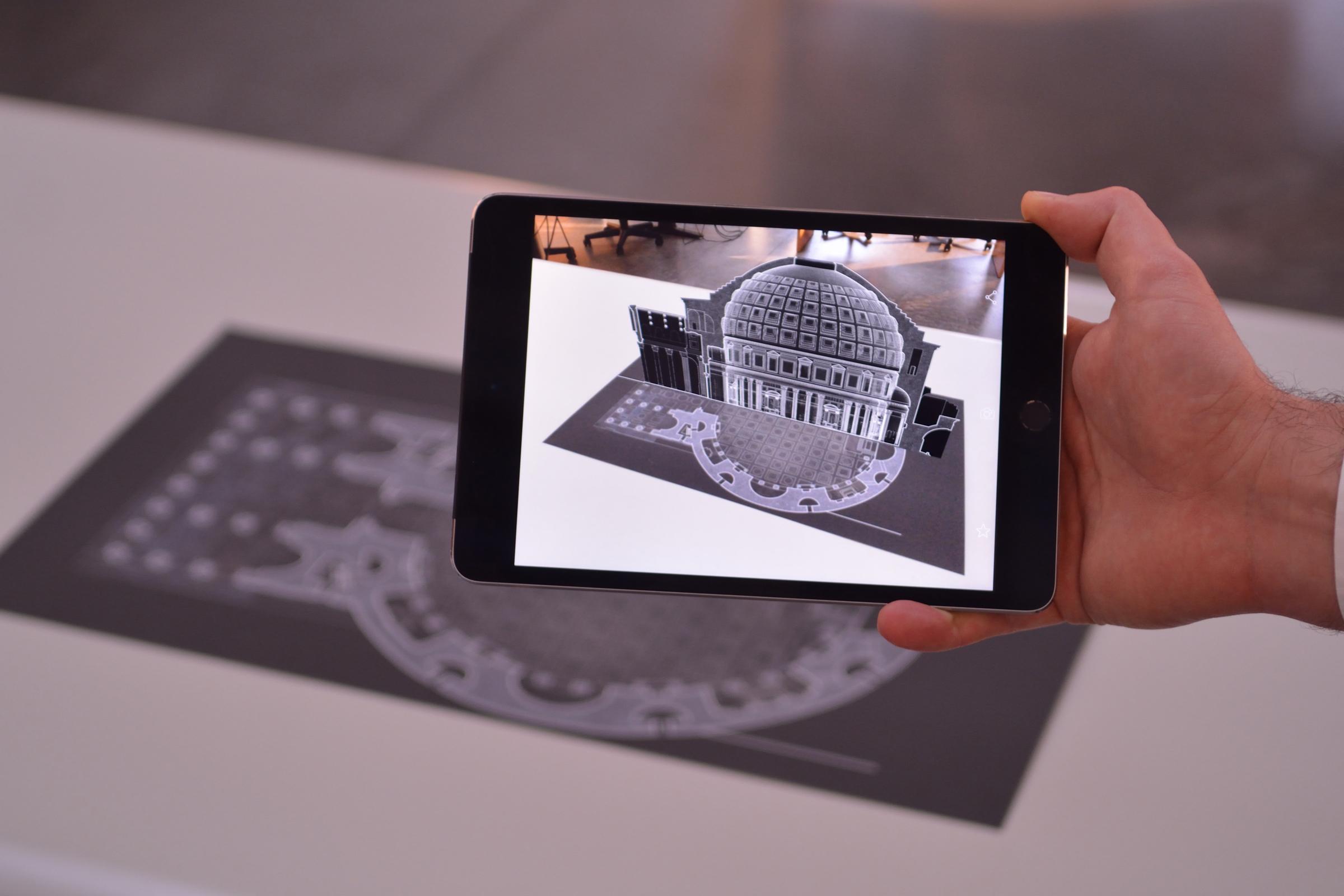 The method on which the research intends to propose an original contribution, consists in superimposing a three-dimensional model enriched by a selection of contents on an architectural drawing in AR. This digital media is aimed at the contextual visualization of correlations, alignments and correspondences between the drawing and the 3D model of the relative architectural space. In this contribution we present the applications in AR developed on the drawings of the Pantheon and the false dome of Sant'Ignazio in Rome.

Marco Canciani
Marco Canciani, Full Professor, belonging to the disciplinary sector Icar 17-Drawing and coordinator of the Riltec laboratory (Survey and Digital Technologies), carries out interdisciplinary research aimed at the study and experimentation of innovative methods of survey, which integrate topography, photogrammetry with APR systems (Remote Pilot Aircraft) and laser scans. He has experience in the field of virtual anastylosis in the archaeological field and virtual reconstruction of architecture and urban centres, affected by seismic events. He also deals with Geographic Information Systems developed in projects carried out at national and international level and the construction of models for augmented reality and virtual reality. In the field of applied research, he was responsible for the international research Italy France "Galileo" on new methods of surveying; he participated in the research "Technologies for the improvement of Security and reconstruction of historical centres in the sisMIca area" (SISMI) and in the "Digital Ecosystem for the use and enhancement of cultural heritage and activities of Lazio (ECODIGIT)", of the Technological District for Cultural Heritage (DTC) of the Lazio Region, as key person and coordinator of Work Package 4. Within it he coordinated the development of a prototype of cultural heritage management through a web viewer of 3D models, integrated with informative data and GIS data (Task 4.3). Within the third mission, he was responsible for the urban survey activities and the development of a GIS, in Algeria, Peru and Salvador and the earthquake-prone municipalities of Arquata del Tronto. These experiences have been included in international publications some of which have received awards as best papers and best posters and special mentions. He participates in the Roma Tre research unit in the European Research Project H2020 - GISCAD-OV.

Giovanna Spadafora
Giovanna Spadafora, PhD, is Associate Professor of Drawing in the Department of Architecture at Roma Tre University, where she teaches Fundamentals and Applications of Descriptive Geometry and Survey and is vice-coordinator of the Laboratory of Survey and Technologies (RILTEC).
Since 2013 she is part of the Teachers College of the Doctorate Architecture Innovation and Heritage, and of national and international commissions for the awarding of the title of Doctor of Research.
She is a member of the Council of the Course of the 2nd Level International Master in â€œRestauro architettonico e culture del patrimonioâ€, where she teaches Architectural and Urban Relief. She is a member of the Scientific Committee of the series "Cultural Heritage and Territory", for Edizioni Roma TrE-Press. She is a member of the Permanent Research Group Architectural Heritage and Landscape of the Department of Architecture and deals with architectural, archaeological and urban survey and history of representation methods.
Among the applied researches she has dealt with, some have been conducted on archaeological contexts, aimed at the application of integrated methods of survey (the Casa dellâ€™Ancora, the Villa dei Misteri, the Macellum and the Tempio della Fortuna Augusta in Pompeii and the Arco di Druso in Rome).
In recent years it has focused on two main research themes: the first, inherent to the urban and territorial survey, is also addressed to the study of minor historical centres. In this context she has experimented, together with Marco Canciani, the application of 3D survey procedures; the second theme is inherent to seventeenth-century architecture, with particular reference to the relationship between geometry, drawing and construction. In this research context, together with Marco Canciani, Corrado Falcolini, Mauro Saccone and Maria Pastor, she experimented methods of point cloud processing, derived from laser scanner.

Mauro Saccone
Iâ€™m an Italian fully qualified architect with practical experience of GIS for cultural heritage, archaeological and architectural survey using traditional and digital methods such as laser scanner and SFM.
As a result of the practical work I undertook in different geographical and cultural contexts, namely Rome, Pompeii, France and Central America, I was able to learn a great deal about all the issues of the conservation field .
Alongside my field work experience, I have recently received a PhD degree in 3D surveying. My research focused on the development of survey methods since the Grand tour using the Pantheon in Rome as main case study. It involved a great deal of independent research, requiring initiative, self-motivation and a wide range of skills including the use of a lot of 3D modelling software.