"We draw our creativity from our passion for cycling: Time goes slower. Energy is transformed by pedals through ecological and meditative movement. For us this means more valuable time for the nature, roads, thoughts and ideas". Producing Belts and Accessories through our hands, we reawaken memories held within the tire, memories of unique moments in sports and life. In the manner of our persistent manual work, we are inspired by our grandparents, and we are honored to carry on this tradition in a modern and relevant way. 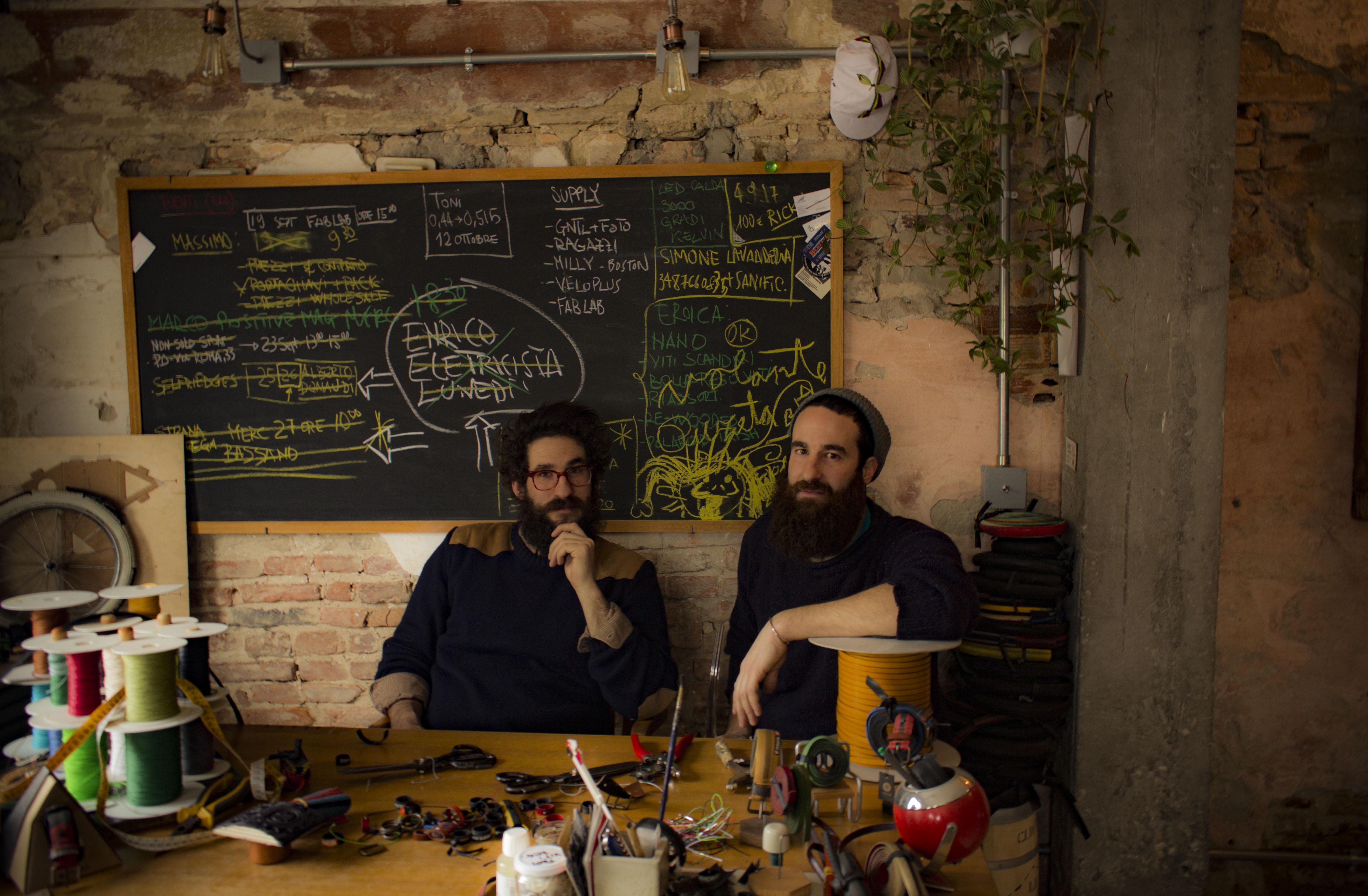 Silvio and Luca Potente are born and raised in Marcon, a little town near by Venice, in the early eighties. They spent their childhood playing many sports and cycling for passion that their grandfather passed to them.
Coming from a middle class family, (father industry labour and mother housekeeper) they spent their secondary school been on the “class average” behaving properly surrounded by a regular country-side lifestyle.
-Silvio: March 15th, 1982
High school: Nautical Technical Institute “Sebastiano Venier” school years 1995-2000, mark 72/100.
-Luca: March 13h, 1985
High school: surveyor institute “Massari” school years 1998-2005, mark 80/100.

An important decision that both brothers have taken in their young age were to do not follow any university studies and start their careers experience.

-Silvio: Straight after High School he started a job in his education sector as Maritime Agent in Venice Port, (2000-2006) which gave him strong knowledges in logistics, foreign languages, administration and business interaction.
Following his interest to learn languages, his life changer decision has been to move abroad to London, working as bartender and bar manager, taking his bicycle, he spent almost 7 year woking, living and biking around UK (2006-2013).

-Luca: he was not fully satisfied about his rural lifestyle and mentality, so he decided to move abroad and to start a new life, working and living in Ireland, Dublin. (2005-2007)
Realized he was fitting perfectly this new life, he started to work as youth hostel receptionist which gave him the opportunity to move through Europe (Holland, Spain,U.K. and France) growing his career experience and up-grading his position from hostels to luxury Hotels (2007-2013). A faithful companion of travel was his bike which changed from regular street bike unto fixed gear, showing him a new underground environment.

Being both truly passionate and artistic soul, helped by their abroad experience and life-teacher of maximization of anything passes though their hands, their pulse to save materials found focus on their own street-bike tires. Having no proper tools to handle this strong and virtuous material they begin to work on it with just hands, scissors, puncher, needle and thread: the result was a belt. A belt made by street bike tread, fully handcrafted, super resistant and totally eco-friendly.
Starting to produce belts for themselves first, sharing it with friends after, they finally decide that this up-cycle product was ready to be shown to a couple of friend’s shops in Venice and Padua, being sure there is no better test than shops customer approval.

Another important moment of their life has been “the southeast Asian trip”:
realizing that being separate from over 6 years they decide to take a break from work and star their first long term trip together heading East.
During those six moths, relaxing and sharing unforgettable experiences together, they realize that belts were receiving important feedbacks from customers, curious, few bloggers and Journalists which were asking more informations about the two Brothers and their unique product so they decide that at the end of their trip they would quit their jobs and move back home to found CYCLED. (May 2014)

Well, easier to plan in a sunny beach than to make it for real once back home!! ;)

The first six months after their return they have been spent sit on a table, planning ahead, writing, discussing how it would have been Cycled future, without touch any tool or tire.
First step to face for Potente’s Brothers was raw material supply in fact they started to contact bike-shops asking them to put on a side any racing bike tire they were trowing away. Apparently it seemed an arduous task but the common passion for cycling and a very well planned Project have convinced the 90% of the shop owners around 300km from their hometown. So far more than 200 bike shops replied to Silvio and Luca’s call!

Second step was to build up a transparent and engaging Brand image.
Once they succeeded (it’s anyway still a work in progress with the brand evolution) the two brothers felt ready on exploring retail market, agents, distribution and Fairs.
Applying to national and international Fairs (Berlin, Copenhagen, Las Vegas) and being accepted and rewarded with great results, their consciousness about proceeding the right path has been confirmed. (Las Vegas “Five Pillars Social Responsibility” Liberty Fairs http://libertyfairs.com/shows/las-vegas-shows/

Four years could seems long time but not to build a brand: the brothers says that they’re now approaching the most important bike tire producers, receiving positive responses about using materials, brand, collaborations and official merchandise because those huge Companies also realized and understood how important are Cycled topics.

Recently, that means in the past 3 months, they tell us, and important invitation to attend at TEDx Talks during the forthcoming October and they’ve been active part of the Giro d’Italia on savings “famous tires” (pro-cyclists) to start a collaboration you’ll see quite soon.