Fleat - Per te. Per il pianeta.

The purpose of our Start-up is to fight the food waste in order to handle and reduce it, through an innovative technological app for the redistribution and sale of unsold cooked food and food products close to their expiry date.

All over the world, commercial activities for the production and sale of food are forced to waste a considerable part of their products every day (equal, on a global scale, to 1/3 of the food produced for human consumption), along the entire food chain, with the following consequences:


Our MISSION:
Our mission is to achieve the "zero waste" goal by raising awareness among food stores and consumers also through the identification of sustainable eating habits.

Our VISION:
Become a leader in the fight against food waste, with the aim of ensuring a positive impact on our planet, through a digital App matches the needs of the consumers and those of the food stores.

The project targets both stores of any kind active in the food sector and consumers and non-profit organizations.
Through our App, food stores will have the opportunity to sell, on daily basis, unsold yummy fresh food and products at discounted prices of at least 50% as well as to accept purchase orders (in pre-order mode) for foods and products that will be collected the following day, with a discount, in this case of at least 20%, so as to allow food stores to plan the production of food and not to waste it.
Consumers will be able to buy the aforementioned food and products directly from their favourite stores, helped by the geolocation system, choosing either to pick them up in the stores or to have them delivered to their home, if allowed by the store.
Furthermore, the Fleat App will issue Fleat Green Tokens for each purchase, which can be used by the consumer to purchase additional food on the App, continuing the fighting against food waste, and to finance green and sustainable projects that will be chosen by us and proposed to our customers, thus allowing the latter to directly participate to help the planet.
It will also be possible for consumers to purchase a "charity box" thus donating small amounts of money in favor of no-profit organizations whose purpose is to donate food to poor people.
Fleat will use part of ies revenues to make donations in favor of poor people and green and sustainable projects.

With the use of the App Fleat a WIN-WIN-WIN effect is generated: 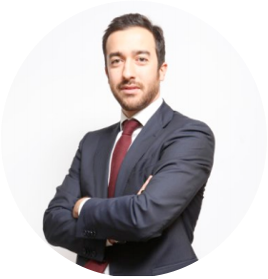 Guido Palombi,
Founder and legal. He has been a lawyer since 2008. He has collaborated for several years with international law firms. He is currently head of the Corporate / M & A and consulting department of a leading law firm. He has gained specific skills in business management and organization assisting primary Italian and foreign clients. He is the reference figure for managerial, legal and organizational aspects.

Manilo Caputo,
Founder and financial advisor Graduated in Economics of Financial Markets brings to the company an important know-how in terms of cash flow management and the best allocation of resources between the various project activities, thanks to his ten-year experience as a Private banker for the Group Azimut Capital Management. Within Fleat Manilo deals with fund raising and all aspects related to economic, financial and institutional areas.