FoodMakers, a year after: the road to success! Pt.2 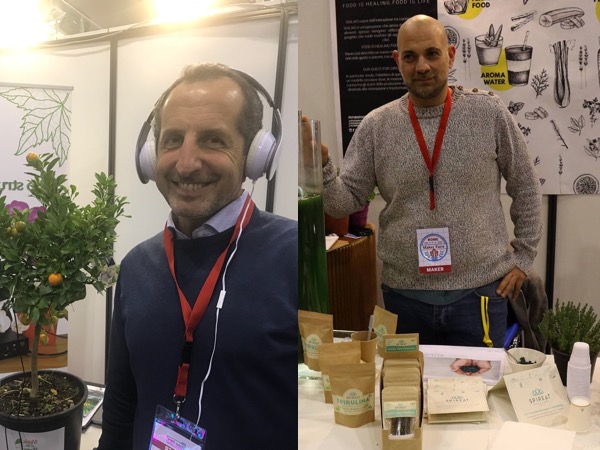 In October, comes back the expected Maker Faire Rome, the event that puts in first priority the ideas and projects from diverse areas, presented to the public and connecting them to the frontiers of the digital world. Maker Faire, the biggest Show & Tell of Europe, is proudly a partner of the Future Food Institute, who sustains and supports extraordinary talents from all over the world; the ones that once again will enter the game of the sectors to be discovered. If we think about the edition of 2017, many were the ideas that managed to be presented in the huge display of Maker Faire, and now, almost a year afterward, we would like to talk about it again. Therefore, we ask one question: How has Maker Faire helped the most innovative and disruptive startups of the food technology and sustainability sectors?

After a first part dedicated to the projects oriented to the food sector, today we talk about well-being: we interviewed two fantastic, healthy and happy startups which were protagonists of #MFR17. Here they are!

MUSIC OF THE PLANTS

Have you ever seen a chili pepper emanating sounds? At Maker Faire, everything is possible! Here is the case of Music of the Plants, a dispositive capable of converting the electric variations of almost any plant into harmonic and therapeutic music for the body!

Aninga Damanhur, one of the project’s creators, talks about their experience at MFR17: “We were already known abroad in the United States, Japan or France, but not as much in Italy! The Maker Faire has represented a true launch for us in Italy!”.

Thanks to Maker Faire Rome, the new device Bamboo was born followed by the sound check, as Aninga explains: “For understanding the public’s reaction, there were two devices, the old one and the new one in a design stage… later the sound check; there were people that were just waiting for the launching of Bamboo!” Was that an unexpected surprise? “During the Faire Rome we were interviewed by TG1 and right after the service was running, we received an incredible increment of visits in our web page! Always thanks to the visibility that Maker Faire has helped to give us, we also went on air as guests in a  TV program: I soliti ignoti”.

We conclude with Spireat, an idea born for the passion towards the microalgae world, particularly the spirulina. Spireat, with their motto “The best choice for a better life”, shows how the company is improving the work quality and life of each of us, with a healthy, bio and sustainable ingredient.

How did #MFR17 has helped with your project? Answers Antonio, CEO of Spireat: “With Funghi Espresso (startup which cultivates mushrooms from the waste of a coffee filter), we created dishes using and valorizing this two ingredients together, and we are moving forward from there! We’ve also collaborated with University of Tor Vergata providing them our production systems and supporting their algae specialized laboratory”.

In the last edition of Maker Faire Rome, we were behind the most diffused protagonists (and the most popular): “My team was composed of 3 different stands”, explains Antonio, “In two stands we showed the spirulina cultivation system and in the third one we presented our products…and each one was full of people trying to know more, to taste and to understand the properties! They were intense days!” Future projects? “We will introduce spirulina chips, that contain around ⅓ of the calories that normal chips have… no wonders we have called them No Regrets”.

Who will be the Food Makers of the 2018 edition? Keep following us to find out!