How students give shape to their ideas, 9 3D Printing projects for the Maker Faire 2021 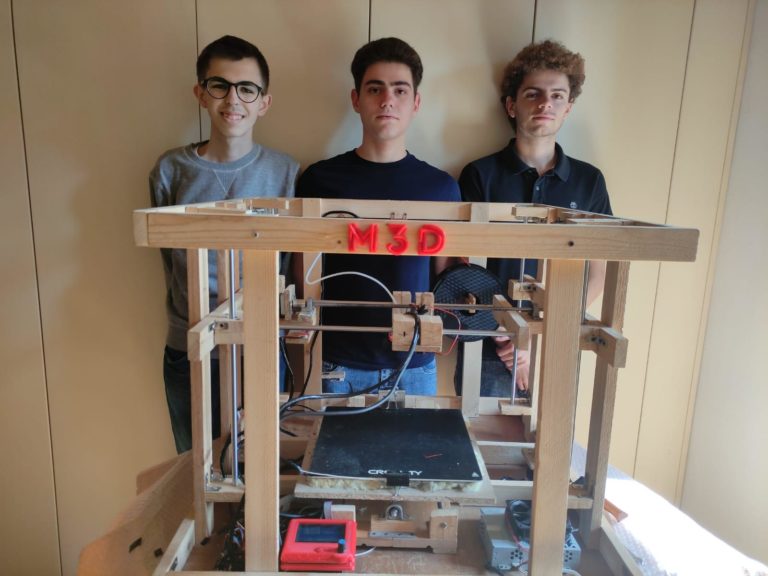 FROM A BRAILLE-TRANSLATING ANDROID TO A NIGHT-VISION DRONE: STUDENTS’ CREATIONS FOR MFR2021

There is also the Wall-Green project, an integrated, robotic and intelligent system for managing the collection of pollutant waste

Creativity is born first and foremost in the classroom. This is why Maker Faire Rome has always paid so much attention to students and their projects. The following are some of the most innovative projects from the schools that were selected by the jury of experts (and will thus be able to participate in Maker Faire Rome 2021).

Brother is a collaborative android with autonomous decision-making capabilities and the ability to interact with the outside world based on event recognition using Artificial Intelligence techniques. Brother is able to recognise the Italian sign language LIS and translate it into audio and Braille. It was developed by Team DigiLAB Volta – I.I.S. Alessandro Volta of Frosinone. “We are a team of students from IIS Alessandro Volta in Frosinone. Everything stems from the desire to overturn the ordinary life of everyone. In our team, everyone has a specific role, which facilitates the realisation of our prototypes. Our philosophy is learning by doing, and our motto is: If you can dream it … you can do it”.

The Wall-Green project consists of an integrated robotic and intelligent system for managing the collection of polluting waste located in open spaces that are not managed by normal waste collection procedures without the help of humans. It is a collaborative robot capable of moving on any terrain (full-terrain) in total autonomy, using rechargeable solar-powered batteries, along the lines of the probe-robots that have been used for years to explore Mars. It is the brainchild of the students of IIS Alessandro Volta in Frosinone.

RaspBerry PI4. The robot is equipped with a main microcomputer, in this case a RaspBerry PI4, which, using a system of cameras capable of moving with a pan&tilt mechanism, Computer Vision software and AI (Artificial Intelligence) techniques, is able to identify polluting objects in often inaccessible terrain (beaches, countryside, riverbanks, etc.) to get close to them and geo-reference their position using a GPS and Google APIs to send the pair of data (Polluting object – GPS position) to a WEB server managed by a company specialised in this sector, which, using a fleet of aerial drones of various sizes and characteristics, will pick up these objects and dump them in separate waste disposal areas.

A rocket that can stabilise itself (thrust vectoring control) through a specially designed and developed avionics system. This is the project of the Hephaestus Rocketry Team. The team is divided into three departments that work in collaboration with each other. The structures department is in charge of designing, building and testing the structure of the rocket and every component attached to and connected with the available means; the propulsion department builds the engine starting from compounds that are accessible to anyone, so that it can be easily replicated by following the open source instructions on our website www.hephaestus.space; finally, the electronics department is in charge of designing the beating heart of the model, ensuring that the rocket starts, is stable and functional.

The project by Buzatu Samir, Lombardo Andrea and Violo Christian, students of the IIID of the ITET “Rapisardi Da Vinci” in Caltanissetta, aims to create a robotic arm that acts autonomously on a chessboard structured for the game of tic-tac-toe in order to implement a game between man and machine. The structure consists of two interconnected parts: the arm itself and the chessboard, which is an interchangeable module. In this sense, the chessboard of our project is interchangeable with other modules, each of which has different uses and purposes. The modules are simply connected by means of a 15-pole Canon plug, making the interchangeability of the modules immediate.

Makers. The group is made up of three students from the third year of the “Rapisardi Da Vinci” school, specialising in information technology and telecommunications. The members of the group have distinguished themselves for their skills in C++ and Java programming and in the implementation of home automation and automation equipment. During their studies, they were interested in applications using platforms such as Arduino and Nucleo-STM 32. They have developed skills in 3D modelling and printing and in PCB prototyping for the creation of electronic circuits.

Servomotors. The robotic arm is made up of a set of parts designed and 3D printed using servomotors that are driven by a 32-bit STM32 microcontroller and provide 5 degrees of freedom to the arm’s movement. The modules are also structurally designed and manufactured using 3D printing. The electronic part is defined differently for each module, and in the specific case of the keyboard for the game of tic-tac-toe, we used an Arduino nano board, which takes care of the game logic and the sensors for the arrangement of the counters, and also manages a mini OLED display to show the various phases of the game. The commands for the movement of the arm are communicated via serial port.

The project by Loreta Culmone, Michele Ottaviano and Raimondo Taschetti (IIIB, ITET ‘Rapisardi Da Vinci’, Caltanissetta) is a reinterpretation of the game of glass marbles on a tilting track. In the original version, the aim was to move the tilting plane appropriately, by simply turning a steering wheel, in order to guide the marble along a track, avoiding obstacles to get it to a final destination. The novelty lies in the way the movement of the track is carried out. In our project, however, the movement is imparted by a person who, with the movement of his or her body. The movements of the platform placed on the floor are transmitted wirelessly to the marble track, placed on a plane, which will move in synchrony.

Electronic gyroscope. The device consists of two modules, managed by microcontrollers, which are linked together by means of a Bluetooth connection. The module placed in the platform on the floor processes the movements of an electronic gyroscope by detecting the rotational movements around the x and y axes of the platform. These movements are transmitted to the module located inside the track containing the marbles and are applied to a pair of servomotors, one for each axis of rotation in order to duplicate the movements of the platform. In addition, the module that manages the movement of the track with the marbles processes some sensors placed along the track and updates the score, which is shown on an LED matrix display.

A drone to monitor the environment and people, equipped with a thermal camera that detects crowds of people even in the dark, allowing images to be viewed from a distance. It was designed by class 5A automation of the “GALILEI” technical institute in Mirandola. “We love robotics and making. We build robot drones and other devices using electronic boards and 3D printers. We have been participating in student and maker competitions for years with our school. We like to invent and work in teams,” the youngsters say.

Lockdown. In times of lockdown, it can then check whether people are respecting distances or curfews. In addition, the thermal camera can detect heat sources both during the day and at night, from hazardous waste or from newly started fires. The drone is also equipped with temperature, humidity and CO2 gas sensors to monitor landfills and detect the presence of non-compliant waste. All its data can be transmitted by radio to a remote database in real time.

Aligner for Sat Antennas and Telescopes

A system that assists the user in the process of collinear alignment between two points in space. Specifically it provides the current angles relative to the Azimuth, Elevation and Polarisation of the illuminator (case of linear polarisation signals). The project has been developed during a PCTO with Tutor L. Sammartano and A. Fedele and developed up to the verification on prototype by the students of 4C-4B R. Razvan, P. Llanos, D. Bazzon, F. Salvucci and G. Valentini, M. Zambrano, J. Arduini.

The 3D Michael Maker is a prototype of a mini-plant that allows the independent production of the polymer filaments needed for 3D printing, perhaps by recycling plastic materials already used in other fields or the same 3D printing waste, which is usually simply disposed of. The project was the winner of the Seventh Edition 2020-21 “dell’Archimede Lab”, an internal competition reserved for the students of the Archimede Technical Institute of Catania, a competition that aims to reward the best design contributions, made by students, during the school year.

Experimenting with reels. The 3D Michael Maker is an inexpensive filament extrusion system that also makes it possible to develop, produce and experiment with the use of spools that are not yet widespread on the market, appropriately mixing different types of plastic materials, starting with virgin granules or shredded plastic, adapting the mixtures to specific printing requirements, even with different characteristics from the standard ones. Thanks to the high temperatures it can reach, the 3D Michael Maker can be used with a wide range of materials. 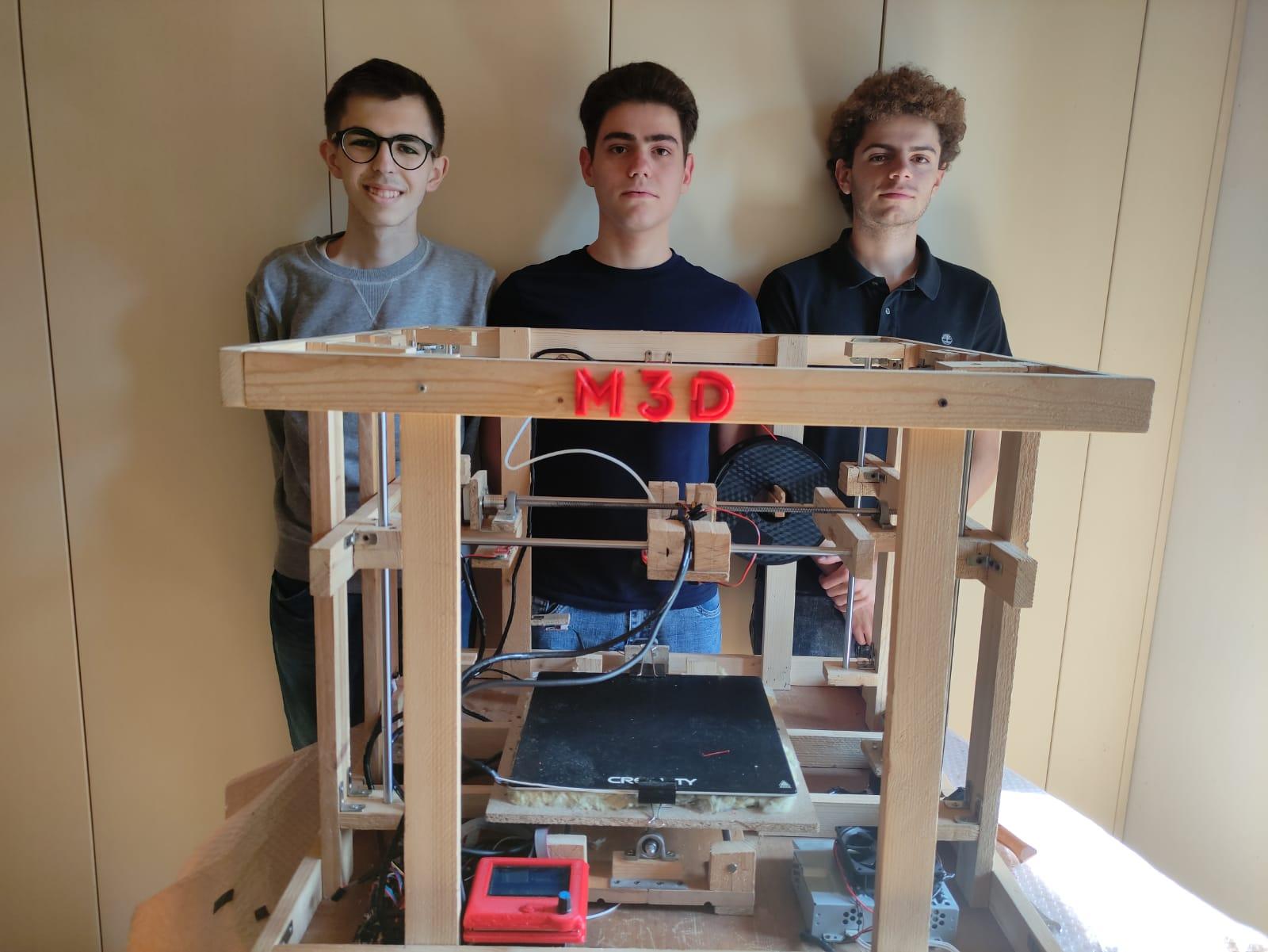 The project, developed by Perotto Davide, Serra Enrico, Burzio Matteo Class 4Asc of the Liceo A. Monti di Chieri, focuses on a 3D printer “out of the ordinary – explain the creators – much cheaper than any other printer that can be compared to it in terms of printing capacity and size. Finally, we would like to stress the special care we took for the environment during the design and construction process of our printer: the structure is made of recycled wood and the power supply is recycled. Another way we have tried to reduce the environmental impact is through the use of environmentally friendly printing materials: PLA is a plastic that is obtained from renewable sources, can be recycled without losing its properties and is also biodegradable”.

IVB art. Elettrotecnica ITI “A. Russo” Nicotera (VV) has realised a prototype of a bat-stick for blind people, able both to detect frontal obstacles and to detect the presence of eventual differences in level, measuring the entity, and communicating it vocally to the user. The order came from the Italian Union of the Blind and Visually Impaired, Vibo Valentia section.