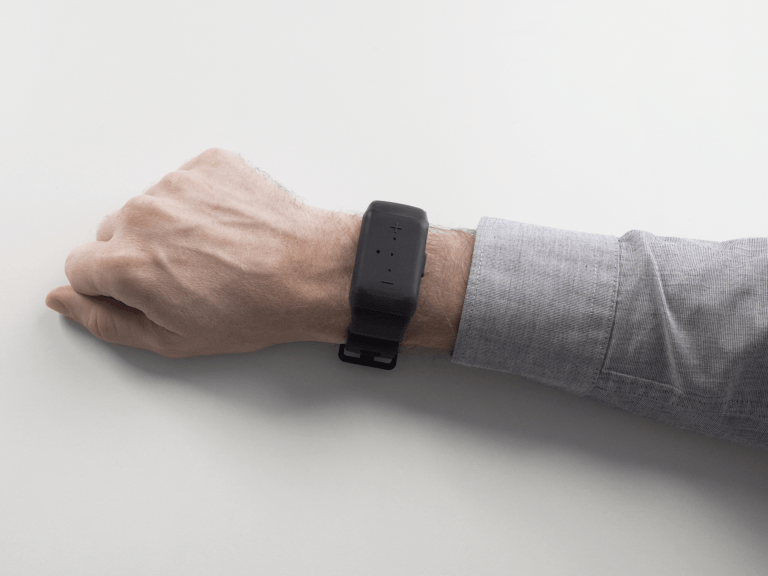 What if a device let you “feel” sounds?

A new device that turns sounds into dynamic patterns of vibrations does just that, and it’s helping those who are deaf or hard-of-hearing access vital information in a unique way: it is called Neosensory Buzz, and it is a wearable device resembling a wristwatch, mimics the ear’s cochlea by sending vibrations via the nervous system to the brain, effectively creating another sensory channel to the brain’s auditory processing center.

“The brain is locked in a vault of silence and darkness inside our skull, yet it constructs this whole world for us”: so says Dr. David Eagleman, PhD, Stanford University neuroscientist and co-founder of Neosensory, describing the eyes, ears and fingers as peripheral “plug and play” sensory devices. “Our brain doesn’t know and it doesn’t care where it gets the data from. It is fundamentally always trying to get information across the senses. Whatever information comes in, it just figures out what to do with it.”

The technology he builded together with Dr. Scott Novich, PhD, focuses on sending data streams to the brain through the sense of touch, known as ‘haptic feedback’. They start reaserching the so called “sensory substitution” back in 2013 for the hearing impaired.

A sensory substitution system consists of three parts: a sensor, a coupling system, and a stimulator. The sensor records stimuli and gives them to a coupling system which interprets these signals and transmits them to a stimulator. In case the sensor obtains signals of a kind not originally available to the bearer it is a case of sensory augmentation. Sensory substitution concerns human perception and the plasticity of the human brain; and therefore, allows us to study these aspects of neuroscience more through neuroimaging.

A device for sound awareness that helps be more aware of sounds such as doorbells, water running, people talking, dogs barking, babies crying, and hundreds of others.

Buzz uses sensory substitution to feed sound information directly to the brain through the skin. It benefits those who were born deaf as well as those who were born with hearing but currently use hearing aids or other assistive listening devices. Users describe wearing Buzz as a tri-modal hearing experience.

Buzz is a wearable device; it resambles a smartwatch and its easy to manage and to wear.

The wearable also features an alarm setting, which users can customize with desired vibration pattern.

How does it differs from current assistive technology

Assistive listening devices such as hearing loops, FM systems, infrared systems, and hearing aid accessories rely on amplification to deliver sound. Assistive alerting devices, such as bed shakers and flashing strobe lights, use touch and sight to alert users to alarm situations. There are also new smartwatch apps that identify sounds and display them as text on the watch face, such as the free SoundWatch for watches that use Google Android OS.

Buzz uses sensory substitution to feed sound information directly to the brain through the skin. It benefits those who were born Deaf as well as those who were born with hearing but currently use hearing aids or other assistive listening devices. Users describe wearing Buzz as a tri-modal hearing experience.

“They are seeing someone’s lips move, hearing something through their ears and they’re feeling vibration on their skin,” Eagleman said. “When they put all three of those channels together they get a really rich sense of what’s going on.”

Neosensory plans to launch a new device specifically designed for those with high-frequency hearing loss by the end of 2021, using the same hardware programmed with different algorithms. The technology captures high-frequency phonemes and turns them into very particular vibrations on a specific part of the wrist.

A phoneme is a unit of sound that distinguishes one word from another. Exactly what happens with age-related hearing loss: it’s just a few phonemes that start getting hard to hear. “With cross-sensory boosting, the ears will still do most of the work but the wristband will tell which phoneme was just said. It will allows people to understand what’s happening with speech in particular.”

The wearable, like its ‘older brother’, will help people hear through their skin.