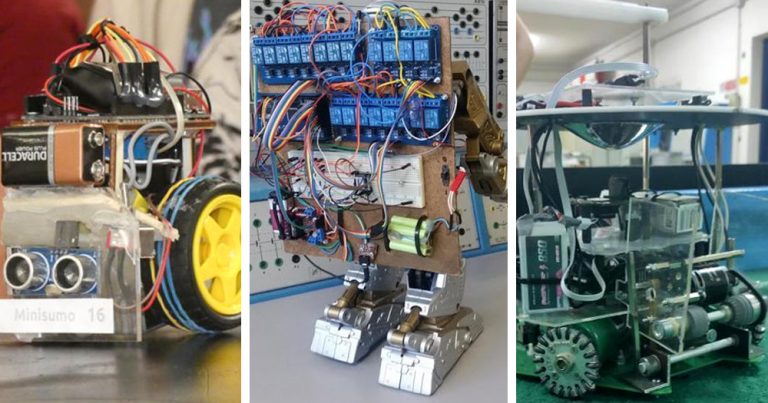 Who does not remember the toy robots with which, as children, they spent hours imagining the most diverse adventures and situations? These “hi-tech” games together with a lot of imagination took many children directly into the future and to their delight, robots could transform themselves and evolve in truly unique ways.

Also today, young people continue to play with these technological toys. The difference with the past is that, in the meantime, robotics has made great strides, and has become a subject that is now studied at school. In fact, there are numerous cases of high schools that organize laboratories in which robots are built, thus providing real ‘training grounds” where their students can become the designers of tomorrow.

The three high school projects we are about to present demonstrate the surprising level of expertise that students have achieved in designing “creatures” equipped with artificial intelligence.

The name of the project name already says a lot about its content. In fact, from a high school in the Piedmont region of Italy comes RoboSumo that features automatons capable of fighting like real professionals. Obviously, with chips and electronic circuits. The objective? To knock the adversary out of the ring, as in any self-respecting match, of course! Each of these “Sumo wrestlers” has the same basic equipment (engine, sensors, and an Arduino board). Starting from there, the various competitive school teams design “their” robots with different and specific characteristics. But what they all have in common is that they use recycled materials.

The design and realization took place in the FabLab ‘Vallauri’, which includes the Electrotechnical students at the Vallauri Institute in Fossano, in the Province of Cuneo (Italy). At the end of the year, the robotics students at the high school entered their robotic “sumo wrestlers” in a competition involving several robots. At the end of the competition, the eliminated RoboSumo robots are dismantled and their various components are used to assemble new and even more powerful RoboSumo robots!

This project designed and realized by the students of Electronics and Computer Science, aged between 16 and 18, at the IISS Manetti Porciatti in Grosseto (Italy), is also a school robotics project and is surprising for its originality. The students at this high school, in fact, created two soccer player robots, which also took part in a real European competition, the 2019 RoboCup Junior.

These robot soccer players with artificial intelligence are able to recognize and chase an orange ball. Once the ball has been obtained, the next objective, just like in a soccer game played by humans, is to put the ball between the opponent’s goalposts, one yellow and one blue. The two soccer player robots measure 8.6 in (22 cm) in diameter and height, while the field is a rectangle of about 95.6 x 71.6 in (243 x182 cm).

It goes without saying that, in order to design robots with technologies capable of performing these actions while still in high school means that considerable effort and skills were required of these high school students. For example, developing technical capacities such as 180-degree vision and devices capable of recognizing the edge-of-field lines, estimating one’s position, and catching the ball are just some of the characteristics featured in these “champions”’ of robotics. No doubt about it! These RoboCup robots are superstar soccer players!

Who said that old and no longer used toys cannot be upcycled? Even an “old” robot with technologies from a few years ago can be “resurrected” and become once again fun and entertaining and ready for new adventures. With precisely this concept in mind, a robotic creature, Frankenstein 3.0 was designed and developed by the high school students at ITIS A. Russo in Nicotera, in the Province of Vibo Valentia (Italy).

The robotics project designed and realized by the students at the high school specializing in electrical engineering literally evolved along with them. In fact, as they acquired new skills, the robot moved from the rudimentary version 1.0 – infrared-guided – to 3.0, equipped with IoT technology and controlled by Bluetooth thanks to the MQTT protocol.

Frank, as he was amicably nicknamed by the students, was therefore literally brought back to life, even though he had seemed doomed to oblivion. But, thanks to the commitment of his young Italian designers, Frank can now “live”’ even better in the modern world.

The RoboSumo “wrestling” robots, the two RoboCup superstar soccer players, and the newly resurrected Frankenstein 3.0 are three impressive projects that you absolutely must see in action! Come discover them along with many other innovative ideas in the field of robotics, that will be present at the Maker Faire Rome – the European Edition 2019, the world-famous innovative technology fair that takes place from 18 to 20 October at the Fiera di Roma.