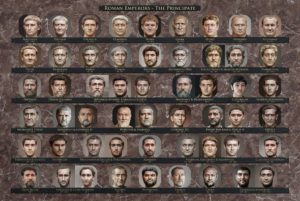 Over 800 images of busts were tansformed, or restoreds to make the 54 emperors of The Principate

Using the neural-net tool Artbreeder, Photoshop and historical references, artist Daniel Voshart created photoreal portraits of Roman Emperors. For this project, he transformed, or restored (cracks, noses, ears etc.) 800 images of busts to make the 54 emperors of The Principate (27 BC to 285 AD).

The Principate — Notes and References

Roman Emperors Photoreal Project. The technology behind it

The main technology behind Artbreeder is it’s generative adversarial network (GAN). Some call it Artificial Intelligence but it is more accurately described as Machine Learning.

Artistic interpretations are, by their nature, more art than science but  Voshart made an effort to cross-reference their appearance (hair, eyes, ethnicity etc.) to historical texts and coinage. He’s been striven to age them according to the year of death — their appearance prior to any major illness.

His goal was not to romanticize emperors or make them seem heroic. In choosing bust / sculptures, his approach was to favor the bust that was made when the emperor was alive. Otherwise, he favored the bust made with the greatest craftsmanship and where the emperor was stereotypically uglier — his pet theory being that artists were likely trying to flatter their subjects.

Some emperors (latter dynasties, short reigns) did not have surviving busts. For this, he researched multiple coin depictions, family tree and birthplaces. Sometimes I created my own composites.

Daniel holds a Bachelor of Fine Arts from the School of Image Arts at Ryerson University. He worked as a cinematographer, shooting the MDF Trilogy (Dir. Kazik Radwanski), music videos for Bishop Morocco and Trust(Dir. Eva Michon), concept films for fashion brands Minnow Collection, Calla and Rita Liefhebber, and the acclaimed feature film Tower (Dir. Kazik Radwanski). His films have screened at some of the world’s most prestigious film festivals including Berlinale, Locarno, Viennale, Toronto, Edinburgh, MoMA’s New Directors/New Films and Slamdance, and have been honoured with two Canada’s Top Ten selections, a Grand Jury Prize at Slamdance and two Genie Award nominations. (Film CV)

In 2015 Daniel completed a Masters of Architecture at the University of Toronto with a focus on sustainable design and VR. For two years, he worked at Linebox Studio, an architecture firm with offices in Ottawa and Toronto, integrating a VR workflow into both residential and commercial projects. In 2018 he became VR Specialist on Star Trek: Discovery.

The Emperor Assisted Portrait Project is a quarantine project.