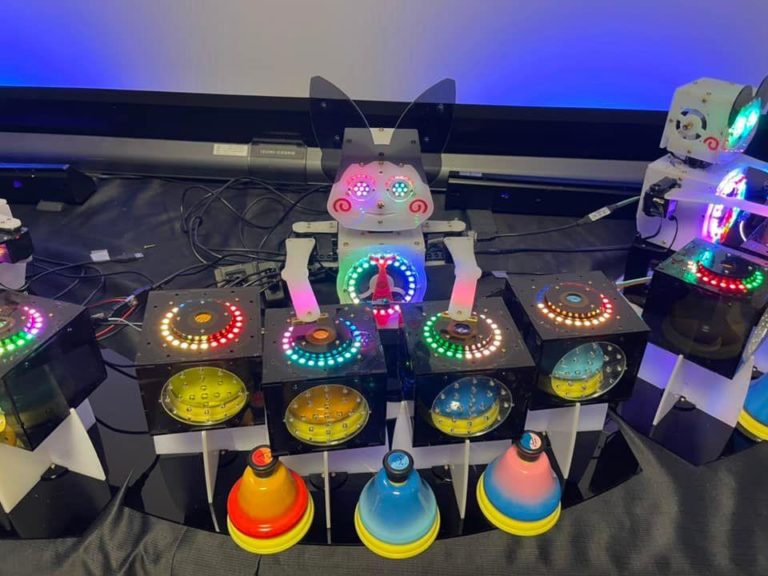 At MFR 2022 music was  protagonist of several projects

At Maker Faire Rome 2022 the music has been the protagonist of several projects.

From an entirely homemade audio systems, to robots that sing and play to enliven the days of the children in kindergartens or the guests of nursing homes, passing through the creation of sustainable vinyls that reduce energy consumption and the use of pollutants.

Ideas transformed into concrete products, made by makers, for profession or passion, or designed by university research centers, which have been presented to the public and tested in the field in the pavilions of the tenth edition of Maker Faire Rome. 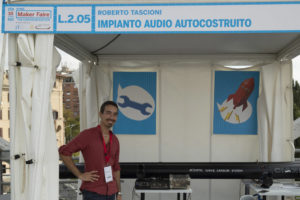 The project of a Maker with a passion for electronics who made, with his own hands, an audio system with enormous potential that does not exist on the market.

Roberto Tascioni presented at MFR 2022 an audio system with transmission line subwoofer and amplifier in class T 480 Wrms. Unlike those available on the market, the system has been entirely designed at home, starting from electronic boards with unique features, up to the realization of speakers that exploit the principles of sound transmission little known to the public.

One of the most interesting parts of the project is the 180 Wrms transmission line subwoofer made with 2 PVC tubes 3,6 meters long. Thanks to its particular shape, it is able to exploit the resonance of acoustic waves in the tube itself and this allows to obtain very deep bass and, at the same time, an acoustic power outside conventional parameters.

To make clear the power of his audio system, Roberto explained that in a common apartment it is preferable not to set it more than 1/10 of its nominal power. Considering this aspect, Maker Faire Rome and the large spaces of the Gazometro Ostiense have been the ideal environments for appreciating the real potential of this technology, in terms of acoustic efficiency and sound quality. 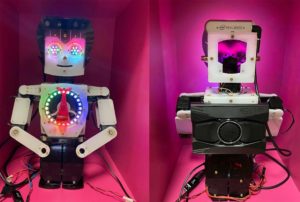 Buddy-kun is a robot able to speak, sing and play musical instruments, that exploits the potential of the artificial intelligence and uses speech recognition and speech synthesis to communicate with people.

The robot is equipped with a small PC on the back, connected to several devices, including a 3D camera, a microphone and speakers. Buddy-kun is also equipped with nine servo motors that allow him to move head and arms and it expresses its “emotions” through an integrated LED lighting system.

Buddy-kun robots can also work together just like a band, playing songs and music and becoming the perfect entertainers also for moment of leisure in kindergartens and nursing homes.

Buddy-kun robot was designed by Tetsuji Katsuda, a Japanese engineer, who in his free time enjoys creating robots, musical instruments and original works of art.

Biovynil: a sustainable alternative to the vinyl 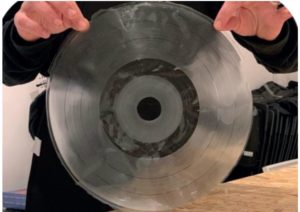 In recent years, the vinyl has experienced a real come back and if on the one hand phonographic discs are fascinating objects, on the other hand they have a very negative impact on the environment.

This is because the vinyls are made with polyvinyl chloride (the well-known PVC), a material only partially recyclable and with very high production costs. Making them involves an expensive process in terms of time and energy consumption: just think that a single disc produces about 0,5 kg of CO2, without considering the pollution caused by transport and packaging.

Based on these considerations, Giovanni Inglese and Saperi&Co centre of Sapienza University of Rome have thought of a sustainable way to produce phonographic discs and they developed an innovative process that reduces energy consumption and eliminates the use of PVC.

Unlike common printing processes, that requer hot pressing by means of a hydraulic press, the project “Biovynil” needs the simple cold casting of a solution composed of 97,5% water and 2,5% natural gelling agent, on a common stamping matrix. The layer formed by pouring is left to solidify and then removed and applied to a support element, such as recycled cardboard.

A sustainable and real alternative to transform a product that has always been considered highly polluting into a totally green one.

Electronic music and visual art combined in a single solution. Digital elements change conformation and are modeled under the influence of musical frequencies.

A project realized by Piri Mobin, Graduate Student in Product & Service Design, and Viktor Malakuczi, researcher in the PDTA (PIanification, Design and Technology of Architecture) department.