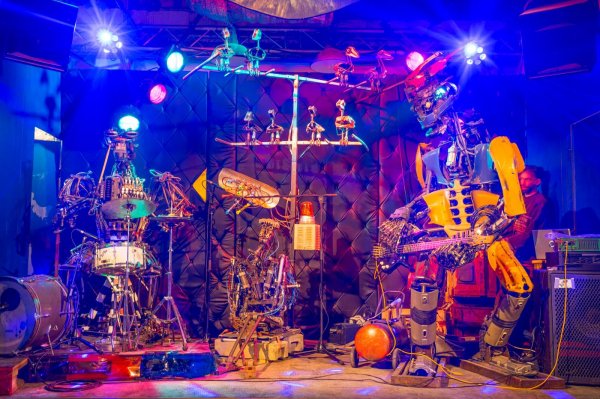 I will bring an art exhibition in which i show moving sculptures made from scrapmetal. Its an exhibition with action - so i call it "Actionbition". In my Actionbition i show a group of, pneumaticaly driven, sculptures which make real music on their instruments and express their joy doing so. The group is called the: One Love Machine Band.
The Band Members are: Afreakin Bassplayer on the bass, Boom Tschak King Kong on the drums and the "Flute Flock" on the flutes (eight birds sitting on a tv areal). Also with them is their (robot) manager Sir Elton Junk with a two minute comedy show interac ting with the audiance and and a groupie, "Grouch the bin", a remote controlled rubbish bin with a monster inside.
I will bring also a few of my non moving sculptures to complete the stage picture. My performance takes about 20 minutes. The robot band (by the way, its totaly ok to call them robots, i like the understatement) plays about four short songs and then Elton has the final word. I usually do the show (as you probably know....) a few times a day.
WEB FACEBOOK

Kolja Kugler
Berlin, Germany
Kolja Kugler is a native Berlin Artist. In the early nineties Kolja collaborated with The Mutoid Waste Company. They lived, worked and exhibited on the former cold war frontline, Potsdamer Platz, Berlin, mutating former war machinery into peacful objects of art. One of the most recognized works of this time is â€œThe Lost Tribe of Migâ€- project, an immense installation in the city centre of a Mig 21 fighter plane flying out of a four story building. Over the time Kolja discovered how to use airpreasure to animate his sculptures. Following years of traveling in Europe with the Tekno underground Art movement groups Alien Pulse Agency and Spiral Tribe, Kolja took of on his own independent travels around the world (2001-2006). Throughout these travels he exhibited his largest robotic sculpture â€œSir Elton Junkâ€, in Australia, south east Asia and the three Americas. Back in Europe since 2006 Kolja continues to create moving sculptures. Currently he became a director of a band of pneumaticly driven robot sculptures which express a general joy for live by being able to play music on real instruments.
#Music
One Love Machine Ban - Kolja Kugler
2015
Back Dati aggiornati il 08/11/2022 - 10.59.34