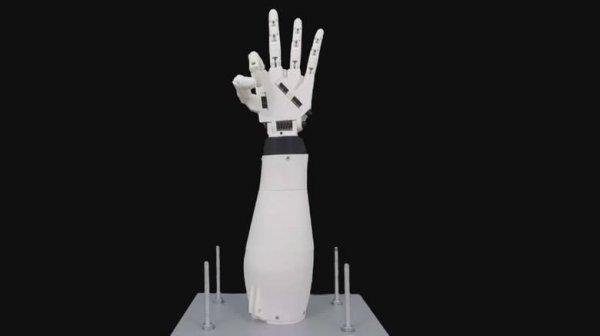 My name is Thanos Tziatzioulis, I am a 16-year-old student and I live in Athens, Greece.
I came up with this construction when I saw a fellow citizen having a plastic hand, similar to the ones that dolls displayed in shops have. Therefore, I felt that I could construct a hand that could move with the movement of the other hand.
By looking up information on the Internet and with the help of a 3D printer, I managed to complete the robot hand. The materials consist of ABS plastic, ropes, metal screws, cables, motors and Arduino. Its weight is about 2 kg and its length is as long as an adultâ€™s hand.
On the outside, its color is white with black on its wrist, it has an Arduino Uno, and power supplier. On the inside, there are cables, five motors, plastic gears, metal screws and ropes that play the role of the human hand nerves.
Its function is based on an Arduino that receives the orders through cables. The Arduino controls and transmits the movement of the hand. A glove having five sensors on it and a plaque transmits the orders to the Arduino through five cables.
By programming in C++ language, I managed to create this robot hand with its fingers imitating the movements of a human hand.
In the period from January to March 2017 the robotic hand was upgraded with the purpose to become more user-friendly. The user is now able to control the functions of the robotic hand without connecting it to a computer.
The materials that have been added are a project box, an LCD (Liquid Crystal Display) and eight buttons each one of them performing a different function. In addition inside the project box there are 5 PCBs (Printed Circuit Board), 2 cables transmitting power to the motor, 5 cables transmitting data and 7 cables that allow the glove to operate. Finally, the Arduino uno was upgraded to an Arduino Mega ADK and was moved inside the control box!
My aim is to develop this construction furthermore.
Greece
WEB FACEBOOK TWITTER 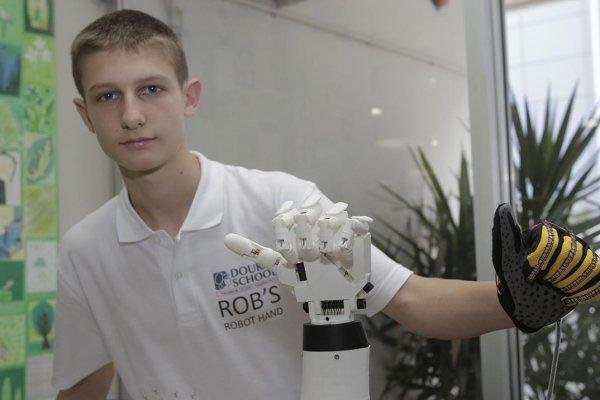