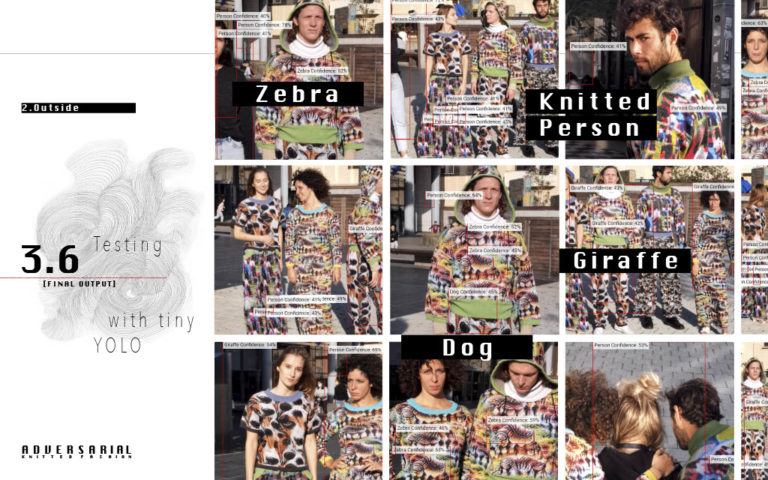 The pervasiveness of technology also brings with it its own perception of intrusiveness, which many are trying to oppose with equally tech solutions. Specifically, by designing clothing that computers recognize as faces but which are, in reality, misleading models for facial recognition software.

At the origin of these solutions, the reflection on the need to protect and raise awareness of the right to privacy

If on the one hand video surveillance contributes to increasing security, and this is undoubtedly its enormous positive value, on the other it raises new questions on legislation and the regularization of the protection of privacy and human rights.

In the absence of regulations capable of following the progress of technology in real time, the situation risks being maliciously manipulated. As always, technology in itself is neutral, neither good nor bad, and it all depends on the use made of it and on the intentions of those who govern it. 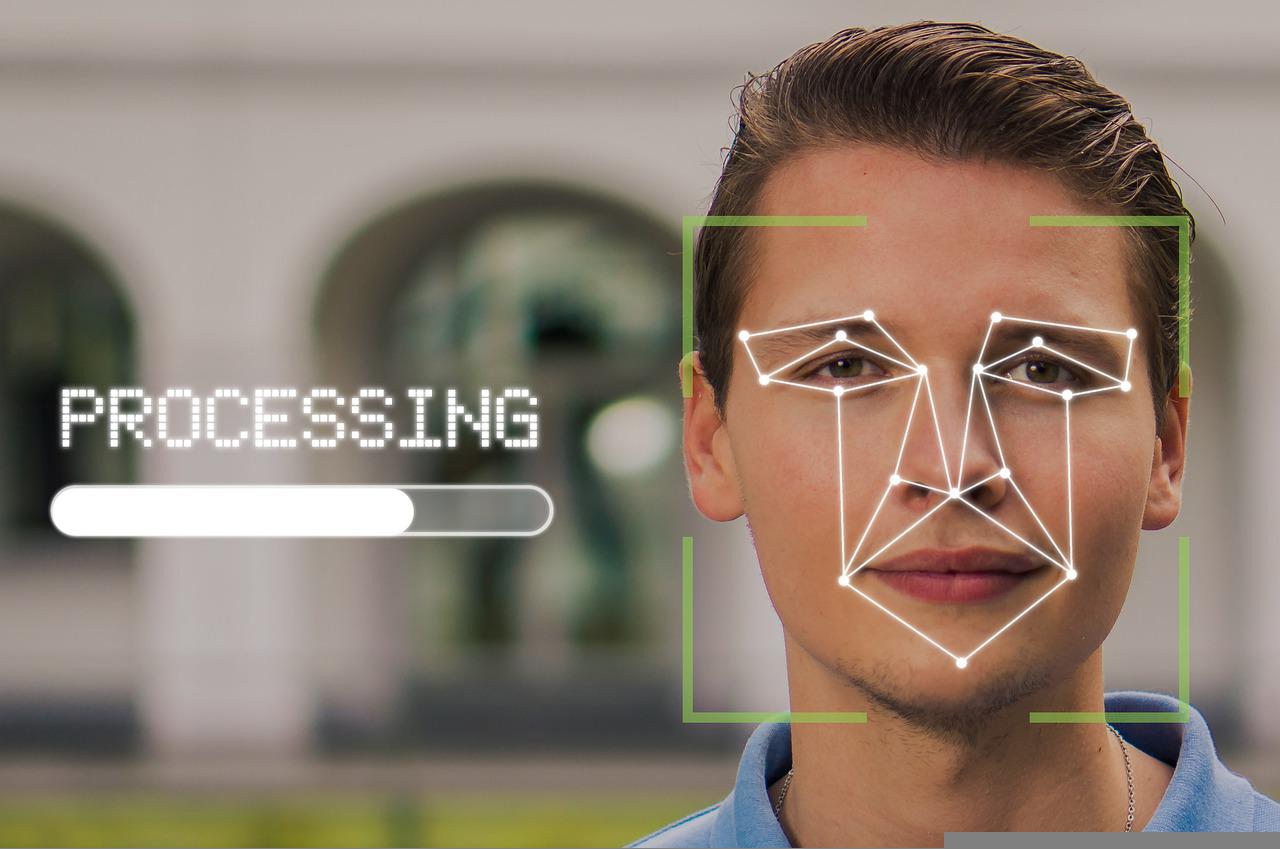 However, if we think that most of the systems in the video surveillance sector are produced in countries where the exercise of democracy takes on different characteristics from those we are used to and in which we believe, some more concern arises.

What years ago was one of the main ingredients of dystopian literature, or the control of people’s lives, today, in the hands of unscrupulous people, could become a reality.

Fashion and fabrics to fight abuse

Fashion and research on materials are committed to counter the rampant phenomenon of the abuse of facial recognition and control of people.

The project we are talking about, Cap Able Adversarial Knitted Fashion, has developed the first collection in jacquard fabric to deceive the cameras and protect the identity of the wearer. 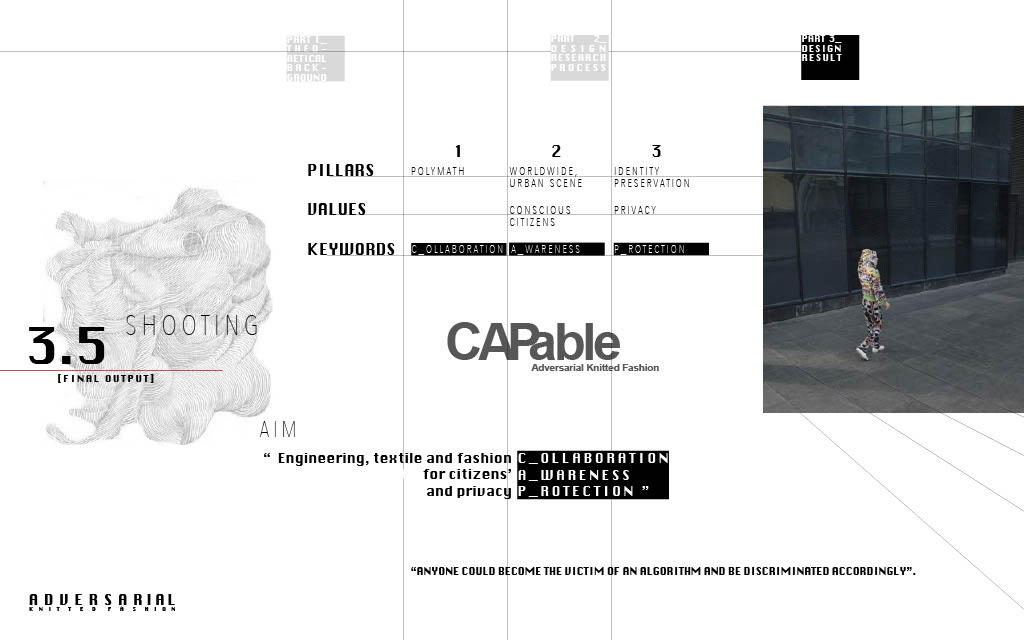 Cap Able wants to be the spokesperson for a problem that affects everyone and intends to help people become aware of the abuses that control systems make possible without people being aware of it. In fact, the boundary between security and control is decidedly blurred: many cameras do not respect the privacy of individuals and could even contribute to violating human rights when images and their processing are used to discriminate, accuse, control and manipulate people.

At the origin of this work, the reflection on the need to protect and raise awareness of the right to privacy.

The idea took shape in 2020 at the Milan Polytechnic, thanks to the talent of Rachele Didero, who created a first capsule collection for her degree thesis. Now also supported by her sister Rebecca, Cap Able was developed at Shenkar College in Tel Aviv.

Selected for the CRT program, Talenti per l’Impresa, Rachele Didiero told the genesis of this project in a recent interview with Liberties.eu: “The project was born in New York in the summer of 2019 where I was for an internship after semester spent at the Fashion Institute of Technology. Here I met an engineer from UC Berkeley and one evening, talking about issues relating to human rights and privacy, the idea of ​​combining fashion and computer science was born. I decided to deepen the research once I returned to Milan and bring it as a subject for a master’s thesis. The first experiments, in January 2020, took place at the Milan Polytechnic. In February of the same year I moved to Tel Aviv for an exchange semester at Shenkar College, an avant-garde institute in particular for the textile department “. 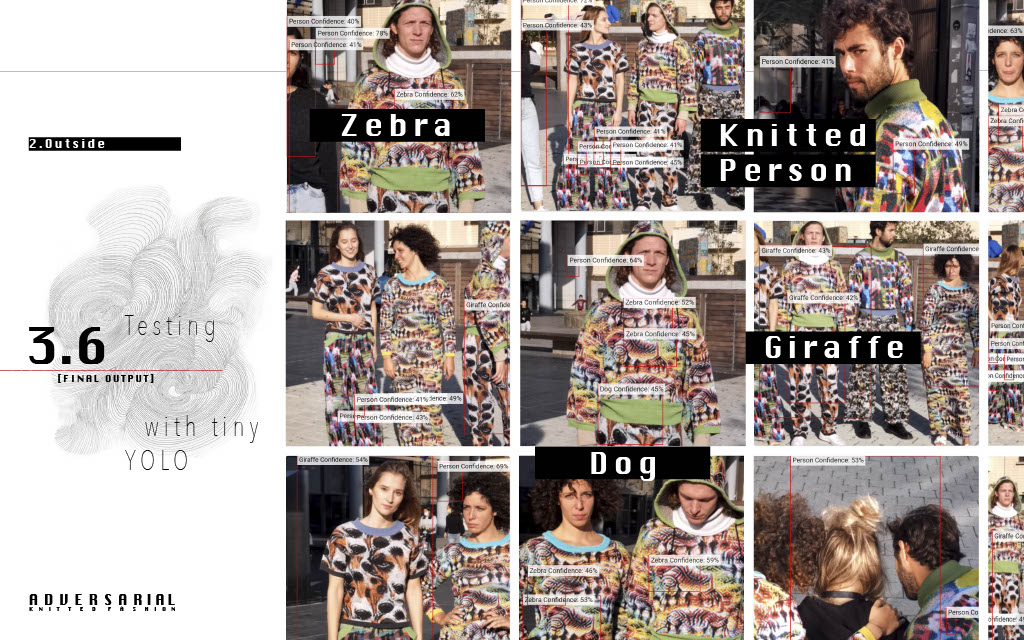 The trick is in the pattern

The collection of cotton jacquard knit dresses is characterized by the very colorful decorations of animalier or geometric inspiration, which reproduce an ‘adversary’ image, which superimposes disturbing elements imperceptible to the human eye, but which confuse the facial detection algorithm, which thus manages to intercept only the decorative motifs and not the face of the wearer.

The jacquard fabric is three-dimensional knitted using threads of many colors.

In the video below, we show you how Cap Able works, and how it tricks video surveillance systems:

Where to buy CapAble

As for the future developments of the project, the immediate goal is to transform the capsule collection into a knitwear collection that can protect the privacy of the wearer, while preserving their safety.

A collection dedicated to a transversal audience, starting from the youngest groups to people who deal with human rights; a collection for those who are sensitive to issues relating to privacy, racism, freedom of expression. An intelligent collection, beautiful to wear and capable of activating reflections.

Cap Able will soon begin a fundraising and investment campaign to be able to produce the collection and make it accessible.