CryptoMarry brings the power of crypto into marriage partnerships

Cryptomarry introduce unconventional ways to strengthen partner relationships that were not imaginable before, thanks to crypto and NFT

CryptoMarry is a Web3 platform that rediscovers how marriages are done. Register you union on-chain and mint an NFT certificate, create your own family DAO, and manage joint crypto assets.

But let’s rewind and recap the fundamentals:

Web3 (also known as Web 3.0 and sometimes stylized as web3) is an idea for a new iteration of the World Wide Web based on blockchain technology, which incorporates concepts such as decentralization and token-based economics.

Some technologists and journalists have contrasted it with Web 2.0, wherein they say data and content are centralized in a small group of companies sometimes referred to as “Big Tech”. The term “Web3” was coined in 2014 by Ethereum co-founder Gavin Wood, and the idea gained interest in 2021 from cryptocurrency enthusiasts, large technology companies, and venture capital firms.

Some experts argue that Web3 will provide increased data security, scalability, and privacy for users and combat the influence of large technology companies. Others have raised concerns about a decentralized web, citing the potential for low moderation and the proliferation of harmful content, the centralization of wealth to a small group of investors and individuals, or a loss of privacy due to more expansive data collection. Others, such as Elon Musk and Jack Dorsey, have argued that web3 only currently serves as a buzzword.

NFTs are digital assets that exist on a blockchain kept on networked computers. The blockchain allows anyone to verify the authenticity and ownership of an NFT. In this case, an image of the bride’s engagement ring was used to create the NFT, which also had the couple’s wedding vows embedded in it.

The marriage transaction is a permanent, immutable and public record of two people commitment. With Cryptomarry such record may rely on ETH blockchain

Cryptomarry introduce unconventional ways to strengthen partner relationships that were not imaginable before. All commitments are executed by a Smart Contract on the Ethereum Blockchain. 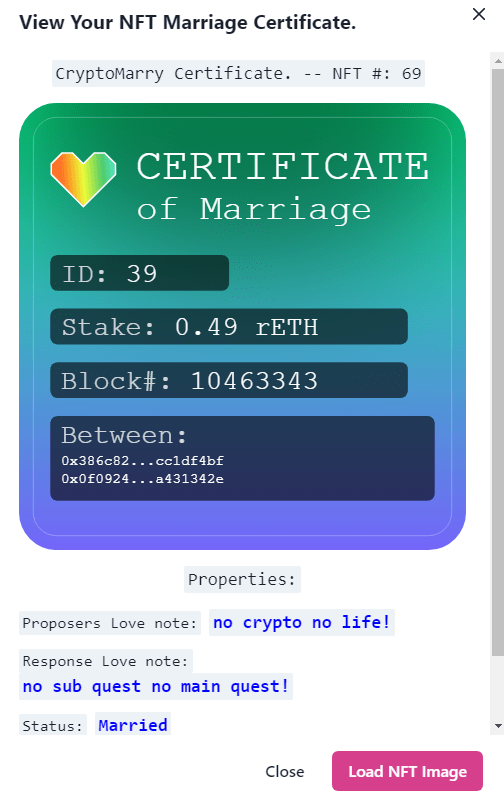 ✅ Add family members into the decision making. In rare cases of divorce, all crypto assets will be split between partners in an egalitarian way!

Conventions can be disrupted by technology; CryptoMarry is a bright example of how it could be done.