3D-RES (3DIMENSIONAL REAL RESERVOIR): A TECHNICAL INNOVATION AND A CLEAR-INTUITIVE TOOL FOR PUBLIC-AWARENESS AND PUBLIC-ACCEPTANCE IN UNDERGROUND EXPLOITATION PROJECTS

Europe can play a central role in the future energy world network thanks to the high storage capacity and to the onshore and offshore potential oil production capacity. These activities can represent a new challenge not only for welfare of the local population involved, but also for the development of new technology with benefits for the whole country. Notwithstanding that, in the last years Oil&Gas Companies have experienced a strong opposition and antagonism from local population that led the last April 17 in Italy to a referendum on exploration and offshore concessions. This strong opposition had the consequence of no more new oil discoveries since 2009 with the total absence of new production, development and new royalties.
This situation can be ascribed in large part to the lack of technical and scientific knowledge about facilities in Exploration and Production activities (E&P) and to the culture of population, traditionally against everything it does not know, does not understand and does fear.
The knowledge of the industrial production cycle is a fundamental aspect for their acceptance. The information and communication strategy adopted by O&G Company has not reached the goal to give the necessary “knowledge” about this field.
This work will be an attempt to fill this gap with a simple but scientifically correct way.
The public acceptance of any industrial activity from local populations cannot disregard from sharing the knowledge of production cycle.
From this point of view in the 2014/15 we started a new research project with the main objective to develop a 3D interactive model of a hydrocarbon reservoir to assist in the transfer of technical information regarding E&P operations.
The specific end user targeted for this project were those stakeholders naturally, who are not necessarily professionals in this technical area.
The first 3D pilot prototype with 0.60*0.30*0.01 m and a scaling rate of 1:25.000 was obtained by correlating for a real ON-SHORE reservoir with equal size to 14,000 * 7,000 * 200 m (L*W*H only of reservoir andf wells).
Thanks to the good results achieved with this first attempt, we created a new complete 3D prototype of an OFF-SHORE reservoir with more details, as wells+faults+saline aquifers+seabed+rocks stratigraphy,and with a less scale rate of 1:15,000 (3D prototype size 0.8*0.30*0.5 m) was created by correlating for a real reservoir with equal size to 12,000 * 5,000 * 5,000 m. (L*W*H for the entire volume considered).
The project turned out as a vision for what happens in 2016 when the poor knowledge of non-expert people about the technology used in the O&G industry led in Italy to a referendum on exploration and offshore licences development.
In this regard it is worth noting that only in the Basilicata Region, where is located the largest onshore reservoir of Europe, voters to the referendum exceeded 50% to confirm the opposition of new ‘DRILLS’. (cfr. NOTRIV)
So, before, during and after the mentioned referendum, this last 3D prototype was shown to university students, people with different age, diverse cultural background: the result was that people increase their level of awareness on oil field, the extension of the reservoir and what mean a E&P project and the exploitation of subsoil under their land.
3D-RES project vision, that seemed futuristic some years ago, actually it finds perfect mission on the implementing of UE Regulation “TEN-E” on Public Debat and the resulting Decree of Ministry of Economic Development (29th Jul 2016).
Aim of this work is to present the evolution of the 3D real reservoir project, focused on a more realistic representation of field, believing that it may represent a powerful clear and intuitive tool for sharing the scientific knowledge in O&G operations: we are ready to show a new 3D reservoir prototype with a scale rate 1: 5,000 that means a size 2 * 2 * 1.5 m. (L*W*H).
Italy
FACEBOOK 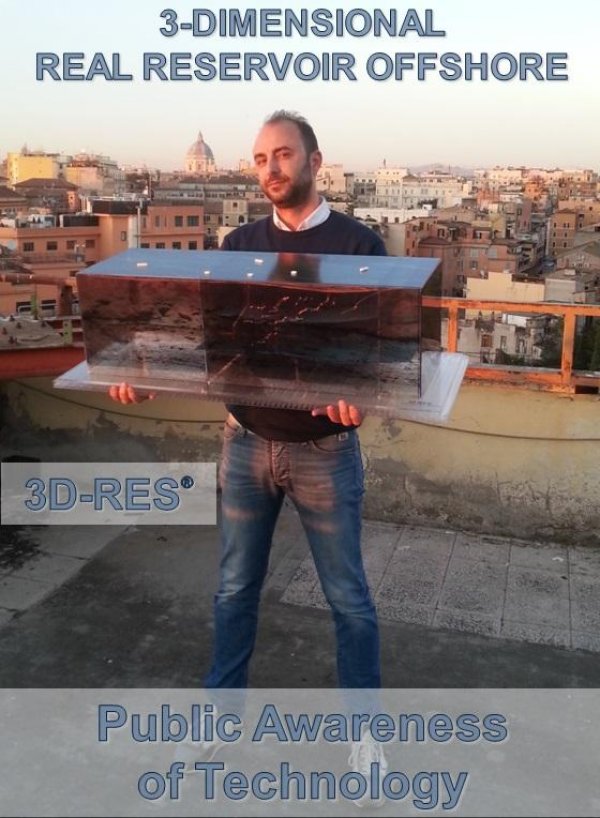 • Prof. Paolo DeFilippis (Project Director)
Paolo de Filippis graduated with honors in Chemical Engineering at the University of Rome "La Sapienza" in 1988. From 1991 to 2000 he was a university researcher at the Faculty of Engineering of the University of Rome "La Sapienza" by the Department of Chemical Engineering Materials Environment since 2000 is associate professor of Chemical Engineering (SSD ING-IND / 27).
The research activity, carried out in part at international research institutes (IFP, University of Wyoming, Western Research Institute) concerned the study of processes for the production of synthesis gas and hydrogen through gasification with oxygen / air and steam, processes of pyrolysis and reforming with coal steam, biomass and both urban and industrial waste. Other research topics developed concerned problems related to the use of heavy oil residues, oxidation processes with oxygenated water.
As part of his work he has carried out numerous collaborations and consultancies for oil companies, national and international research institutes and engineering companies.
The most applicative aspects of scientific and research activities, often developed in collaboration with national and international research institutes and industrial groups, are witnessed by over 10 national and international patents, most of which developed in collaboration with public or private companies.
He is the author of over 100 publications, many of which in international journals.

• Prof. Fedora Quattrocchi (Scientific Manager)
Born in Rome in 1965, she graduated in Earth Sciences (fluid geochemistry applied to seismotectonics) at the University "La Sapienza". He won an ING scholarship (then: National Institute of Geophysics) biennial in 1990. He is currently a researcher-technologist at INGV and is in charge of the Functional Unit "Geochemistry of Fluids, Geological Storage and Geothermal" of the Rome Seismology Section and Tectonophysics. Member of the Enlarged Board of SET PLAN ENERGY of Ministry MIUR since 2014.