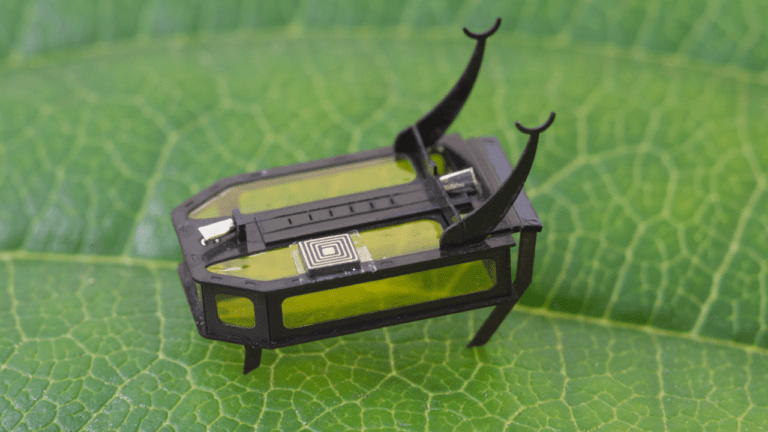 There are also robot bees that could be used for pollination. The project was presented at the last World Economic Forum

There is a robotic worm designed to enter the human brain after a stroke and aneurysms by unblocking damaged blood vessels. An electronic cockroach capable of entering the engine of aeroplanes to inspect corners not accessible to mechanics. And then there is also the robot mosquito capable of attaching itself to ceilings, glass and leaves by exploiting static electricity. Its usefulness? It can be used in search and rescue operations and even to gather information, being equipped with a micro-camera and external sensors. What do these projects have in common? Yes, they all resemble insects, they all originate from prestigious research institutes in the United States (first and foremost MIT in Boston), they are robots, of course, they have super qualities in terms of resistance, energy, sensitivity and above all they have been created to respond to the great challenges of third millennium industry: medicine, research, natural disasters. Here are a few examples.

RoBeetle, the robot that runs on methanol

RoBeetle is the first robotic insect that uses an internal power source without using cables to connect it to an external battery or magnetic fields. It is an 88-milligram robot that moves autonomously powered by the catalytic combustion of methanol, a liquid fuel with high specific energy (20 mega joules per kilogram, almost twenty times more than ordinary batteries) that guarantees a range of two hours of movement on a ‘full tank’ and far exceeds the efficiency of any micro-battery in existence today. The design and construction of the RoBeetle by researchers at the Univ. Southern California are the result of a combination of an ‘artificial catalytic micro-muscle’ and integrated millimetre-scale mechanical control mechanism.

Its tasks. The researchers hope to be able to use it as an artificial pollinator, deploy it in disaster relief operations or even complicated medical procedures.

MIT Boston has developed a microscopic (thread-like) robotic worm made of Nitinol (a special nickel-titanium alloy), designed to enter the human brain immediately after a stroke or aneurysm attack by unblocking damaged blood vessels. The worm can be guided from outside the body thanks to a small magnetic field, is extremely flexible and does not damage vascular tissue, thanks in part to a microscopic layer of biocompatible gel covering it that reduces friction. “Stroke is the fifth leading cause of death and one of the leading causes of disability in the United States. If stroke is treated within the first 90 minutes, patients’ chances of survival could increase significantly explained Xuanhe Zhao, associate professor of mechanical engineering and civil and environmental engineering at MIT, who is in charge of the project. “Unlocking the blood vessels within this golden hour could prevent permanent brain damage. This is our hope. The medicine of the future also passes through here.

The beetle that repairs aircraft engines

The cockroach is the toughest insect in nature. The University of Colorado Boulder drew inspiration from it for HAMR-Jr, which in proportion to its size (2.2 cm and 0.3 grams in weight) runs faster than a cheetah (about 30 cm per second), has four ‘gears’, carries up to 10 times its own weight and moves without limitation thanks to ‘piezoelectric actuators’, thin materials that bend when struck by an electrical voltage. “HAMR-Jr can reach speeds that approach that of an animal in terms of mechanical dexterity,” says Kaushik Jayaram, who led the design of this robot.

At the heart of the engine

According to the researchers behind it, HAMR-Jr could be used during overhauls of aeroplane engines, going inside the engine to inspect corners not accessible to mechanics. It is thought that in the future they could also intervene on a repair.

The project was presented at the World Economic Forum. Since 75% of what ends up on our tables depends on the work of bees, and since bees are on the verge of extinction, someone has come up with the idea of making mechanical bees that could one day take the place of those that nature designed. These Robobees are also able to swim, weigh 84 milligrams and flap their wings 120 times a minute. At the moment they are only flying in the MIT laboratories in Boston and it is estimated that they will be able to start working in the wild in about 5-10 years.

Mosquito in the rescue operation

Researchers at Harvard University and MIT have joined forces to develop a kind of robotic mosquito that can attach itself to surfaces, ceilings, glass and leaves by using the static electricity it emits from a thin layer of foam on its head. It can be used in search and rescue operations and to gather information, being equipped with a micro-camera and external sensors. The next step? Equipping it with a solar cell system to automatically recharge its batteries through light.

The bumblebee that resists the wind

MIT is working on a micro-drone resembling a bumblebee that can withstand violent gusts of wind, just as it does in nature. The wings have a different shape and movement and beat up to 500 times per second.