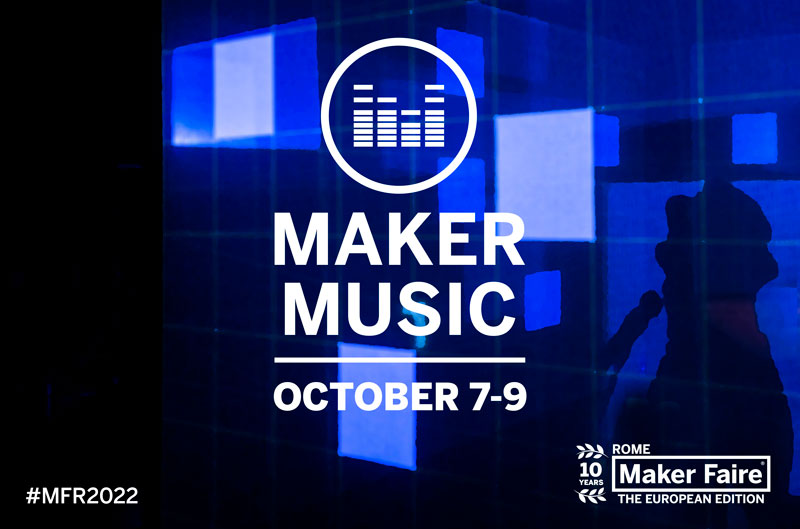 Soundscape is a conceptual map, a search through energy and matter, an organism composed of sounds, pixels and light that processes and transmits the sound generated by the artists.

An installation made of video and audio impulses that immerses the spectator in a living, absorbing space created by the fusion of arts and technology.

An artistic experience based on the combination of video art, music and technological innovation with the viewer at the centre.

In addition to being producers, Frenetik & Orang3 are two multi-instrumentalists with a unique, galactic sound. And what better opportunity for their SpaceHop than to be hosted in a space setup?
For Maker Music, they were accompanied live by a cello and some video art by Studio Clichè.

4.00 pm TALK. DJ Stile presented: The contemporary relationship between images and sound. Starting from the cinema through every type of sound experimentation, the talk charted a path made of words and sounds masterfully manipulated live by DJ Stile, which reaches up to new languages, which from time to time transform due to the historical context, places and technological innovations.

2.00 pm NAIP presented: In the Contruction Site + Studio Clichè. The title is due to NAIP’s idea of creativity “it’s the way I dedicate myself to creativity. The construction site never closes and then it has to do with the sounds I use, noises of work in progress that become sounds. this is a finished show under construction.” and the video set up prepared by Studio CL which will make the performance an immersion in NAIP’s world

3.00 pm NAIP presented: In the Contruction Site + Studio Clichè (as above)

4.00 pm Festinalente Dischi presented: Showcase Decomposer + LIZ – AV Show Decomposer is a musical and audiovisual experimentation project created by Agostino Maria Ticino, one of the founders of the Marchigiano Synth Museum and producer of music for film and TV (Amazon, Rai, Sky). His new show has found the perfect partner in LIZ, an audiovisual artist who has been involved in research and video expression of music content for years.

2.00 pm Samuel presented: Babbaluci live + Studio Clichè, a performance that with the addition of the video and light design by Studio Clichè became exclusive to Maker Music. An electronic set in which, accompanied by Alessandro Bavo, music and voice will add up in an electronic and sunny performance. The sound spread 360 degrees around the audience, together with the immersive videos are a totally new way to listen to the groove of Samuel’s music.

4.00 pm Festinalente Dischi presented: Festina Lente Ensemble with Ominostanco/P41/Rive is a collective project that found in improvisation the formula for creating electronic fabrics dictated by intuition and the man / machine relationship.