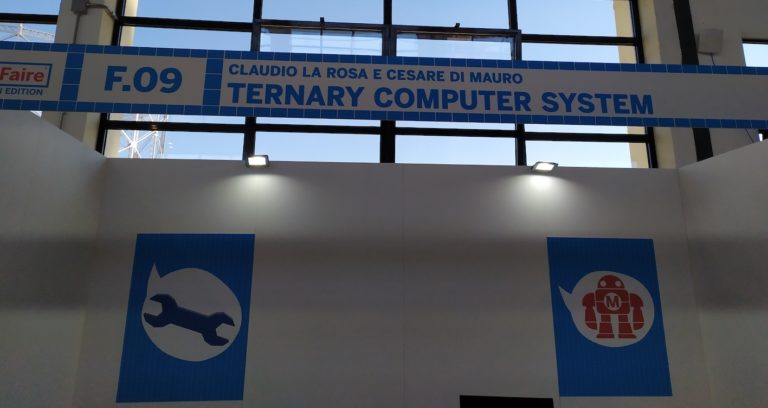 Ternary is the design of a new type of microprocessor, which works with ternary logic (instead of binary). The advantages of ternary are that it compacts information more efficiently than the binary system and reduces the size of the chips (especially the memory, which now takes up most of the surface area). The project was developed by Claudio La Rosa, a professor of computer science in the province of Monza, and Cesare di Mauro, principal QA engineer for the BMW group, who presented it at Maker Faire Rome 2021 at their Ternary Computer System stand, which is also the full name of their project. «Our idea – explained Claudio and Cesare – offers technological advantages that allow a great leap forward in traditional computing and supercomputing». We spoke at length with Claudio La Rosa about Ternary and Maker Faire Rome. Here is what he told us.

Claudio, what is Ternary?

At Maker Faire Rome 2021, we presented a new type of microprocessor. A microprocessor is the basic element of all modern automation, not just the heart of our PCs and smartphones. The microprocessor is in our cars, our TVs, our washing machines, our industrial robots, the rovers that explore Mars. It is the key to the modern revolution. It is interesting to know that the microprocessor was invented by the Italian Federico Faggin.

«All microprocessors – explains Claudio La Rosa – operate using the binary system (at a basic level, information can be represented by BITs that can be either ‘0’ or ‘1’), while our design uses the ternary system. We thus have three possible states representing the basic information. The immediate effect is an incredible increase in the amount of information that can be represented. Our microprocessor can represent more than 278 BILLION more data than a commercial 32bit processor».

What fields of research?

«While we were working on the project, we were contacted by several research groups, both private and university, who pointed out that our microprocessor could be useful in other fields we had not thought of: ternary neural networks, neuron simulation, ternary decision trees, parallel computing».

How far have you got with the development of the project?

«So we decided to take the project further by creating what is a kind of ternary motherboard, a first ternary computer, so that we could easily program our microprocessor. This motherboard was finished a few weeks before October and was presented at Maker Faire Rome 2021. Now we are focusing on the software part; after writing an assembler we are considering whether to adapt a high-level compiler or invent a new language that takes advantage of the unique features of our project».

«With our device, anyone can assemble a development system and immediately start programming for the new architecture».

«The next steps will be to write an operating system that exploits the advantages of the ternary, combining it with features such as artificial intelligence applied to the execution of the various programs (“intelligent scheduling”)».

Claudio, what kind of maker are you?

«I’m an old-school Maker, so instead of using Arduino or equivalent ready-made boards, which allow for quick prototyping, I prefer to use SPICE simulators, paper, pen and the good old soldering iron. This way I spend a lot of time, but I can go deeper into my projects, optimising them and managing to build something radically new».

Why did you decide to bring your project to Maker Faire Rome?

«I had already been to Maker Faire Rome in 2018 and participated in the online edition in 2020. The experience of participating in the past was extremely inspiring and useful. At Maker Faire Rome you can have direct contact with people who can give suggestions on improvements, fields of use and can also help you understand any problems. It’s also always nice to be able to visit all the other stands and see what other people have done».

How would you describe your experience at Maker Faire Rome?

«Tiring, but also very entertaining and informative. This year a lot of people came to our stand because they were really interested; a lot of electronics/computer science people and a lot of university students and some high school students. At the end of the fair you are always very satisfied».

I recommend participation as a Maker to anyone who has something beautiful to show and a visit to the Fair to anyone who is curious about what our future will be like.

What did you think of the location?

«This year’s location was certainly evocative: hosting the fair in the shadow of the Gazometer gives a good idea of a “technology” fair and the Gazometer structures themselves represent a link between past and future technology».