#CallForMakers: submit your project and make a difference! 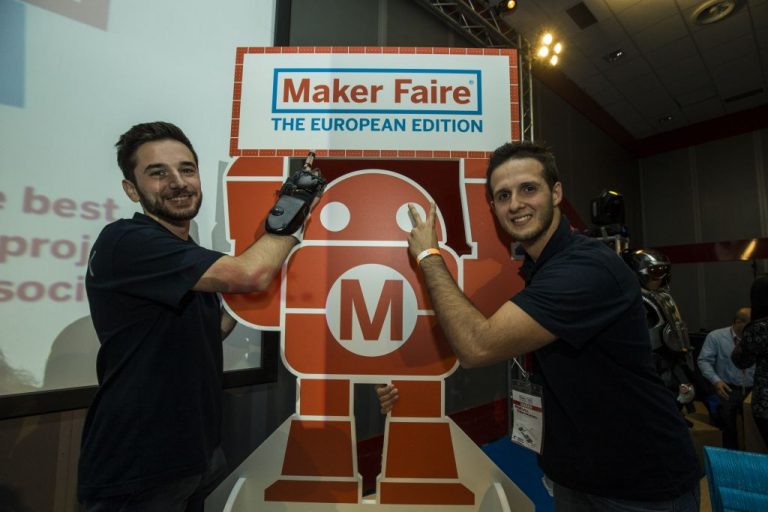 Meet the makers team that won the 100.000 euro prize at Maker Faire Rome 2016 and discover a project that is changing the life of millions of people all around the world!

Q. Hi Dario! It’s really nice to see you again! As you know, the 6th edition of Maker Faire Rome – the European Edition is getting closer and the Call for Makers is still on: two years ago, in 2016, Talking Hands won the R.O.M.E. Prize as “the  best maker project with the highest social impact” and now… you’re changing the life of millions of people all around the world! Can we say that it all started through the Call for Makers? Let’s talk about that: how did you and Francesco first meet and start collaborating?

A. Hello everybody and thank you so much for checking up! We met at University as students, during a research project for the development of a lower limb exoskeleton for disabled people. We worked very well together from the very beginning and it has been obvious opening a startup together when we realized that the Francesco’s idea of Talking Hands had an enormous potential.

Q. Great! What inspired you to apply your skills to finding a solution for hearing-impaired people?

A. In 2013 an American company organized a competition for the best idea for the application of EMG technology, which enable to understand the fingers’ movement through the detection of muscle activity. Francesco thought to use this technology to translate sign languages: unfortunately, EMGs cannot recognize the positions of single fingers, so it was not enough for a sign language translation application. But the idea remained and, after two years, we decided to use our skills to develop the right technology for this purpose.

Q. How long have you been working on Talking Hands? What has the R&D process been like?

A. We started at the beginning of 2015, creating the first functional prototypes using gardening gloves, hand sewing the sensors, implementing commercial components and deeply studying the scientific literature to find the best algorithm solution. During 2016 we moved to 3d printing to realize custom components, optimizing the sensors position and operation and we started different collaborations with other companies to realize specific electronics components for Talking Hands. With that prototype we won the R.O.M.E. Prize at Maker Faire 2016. We spend all the 2017 to achieve a final product, whose first pieces will be available in June 2018. Moreover, we will spend the whole summer to test the product on a sample of final users to be sure to enter the market in 2019 with the best product.

Q. Tell us about how LiMiX was formed.

A. Francesco and I formed Limix in 2015, with the fundamental support of our University and our professors. The social structure is completed by EOS Spa which is a company leader in the field of science and industrial research and Eta Srl, an automotive company. The university gives us an office and it enriches Limix internal scientific know how, while the two companies support us in business management.

Q. Has LiMiX worked projects other than Talking Hands so far?

A. During these years Limix has been focused on Talking Hands. We also considered other applications for our technology, which can be seen as a low-cost gesture recognition system, but we will develop them after entering the market with Talking Hands.

Q. Your project is a wonderful example of makers using their skills to affect positive change in the world. What advice do you have for other makers who want to make a difference?

A. Our advice is a very simple one: work hard! We met so many young people with wonderful ideas who never try to make them real. Once you have found your idea, the problem you want to overcome, you must only work hard on your product. Do not search for money, funds or more people before having a product, or at least a prototype. Take your time, realize your product, test it, change it, improve it. If you realize an excellent product, then money, marketing and selling will come.

Q. Tell us about winning the R.O.M.E. Prize at Maker Faire 2016. How did that affect production of Talking Hands?

A. Before the R.O.M.E. Prize at Maker Faire 2016 we were leading to a dead end: we did not have enough funds to improve our prototype and we were trying to sell our know-how and expertise. The funds received with the prize were fundamental to continue the project and, thanks to the following visibility, we were able to start fruitful collaborations with very important companies, such as Arrow Electronics. Summarizing, the Rome Prize has been fundamental for the realization of Talking Hands.

Q. And we’re glad to hear that! Now, last but not least: how would you describe Maker Faire Rome to someone who has never been there?

A. Maker Faire Rome is an incredible event, one of the best of its kind. It is a place where little startup and makers can share their ideas and skills and relate even with big companies such as Google, Arrow Elettronics, Arduino and many others. Moreover, an entire sector is always reserved for universities, which can exhibit the more advanced technologies and studies. Maker Faire Rome is a wonderful event for everyone: makers, companies, technology enthusiasts and people who want to glimpse into the future. I am always happy to see so many families as visitors: this witnesses that Maker Faire Rome is the perfect place to fire children’s curiosity for all the sciences.

Thank you so much Dario and congratulations for Talking Hands: we are happy and proud to know that Maker Faire Rome can really contribute to make great projects grow and develop all over the world!

We are sure that your experience will inspire other people who dream to turn their ideas into reality.

What are you waiting for? Submit your project to the Call for Makers by July 7th: get on board the largest european fair on innovation. It’s your chance to make a difference!