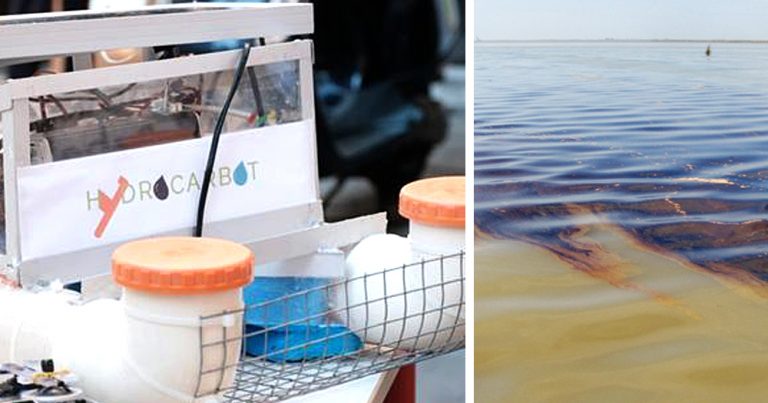 Sometimes news events that have catastrophic or to say the least, problematic consequences, can become opportunities to design and realize innovative devices that can lead to a better future.

Case in point is Hydrocarbot, a robot designed and built by Giorgio Bernardini, Alberto Conte, Luca De Ponti and Tommaso Pavletic, four young students from the Istituto Superiore Liceti of Rapallo, in the Province of Genoa, and developed in collaboration with the Italian Institute of Technology in Genoa, the capital of the Ligurian province.

The fundamental task of this automaton is to remove and clean hydrocarbons (oil and fuel) from seawater. This operation is a procedure that has become increasingly necessary and useful, especially in light of the enormous amount of pollution to which the waters of our planet are being subjected.

The genesis of this project, in fact, derives precisely from a critical situation, originated by a huge seastorm that, in October 2018, hit and destroyed the port of Rapallo on the east coast of Italy. The consequences of the event were catastrophic, as a significant amount of fuel oil spilled into the sea from the anchored boats that had been damaged or destroyed by the seastorm. The resulting urgent need for immediate cleanup and restoration of the seaport area has been anything but rapid and simple.

However, with a robotic device such as Hydrocarbot, oily substances present on any water surface can be quickly recovered and reused. A fundamental component of this sea-friendly robot is the special sponge supplied by the Italian Institute of Technology (IIT), which allows for the best possible absorption of polluting materials. Efficiency and sustainability are also guaranteed by a motor powered by a battery that is recharged via a solar panel.

In short: Hydrocarbot is another interesting example of how technology, combined with the ingenuity of minds gifted with strong inventiveness, can represent a perfect combination to solve problems that deserve much greater attention.

This robot, along with many other innovative projects focused on sustainability and environmental protection, will be present at Maker Faire Rome – the European Edition 2019, the world-famous innovative technology fair that will take place from 18 to 20 October at Fiera di Roma.