A Robot in the kitchen: the new frontiers of the “robot chefs”! 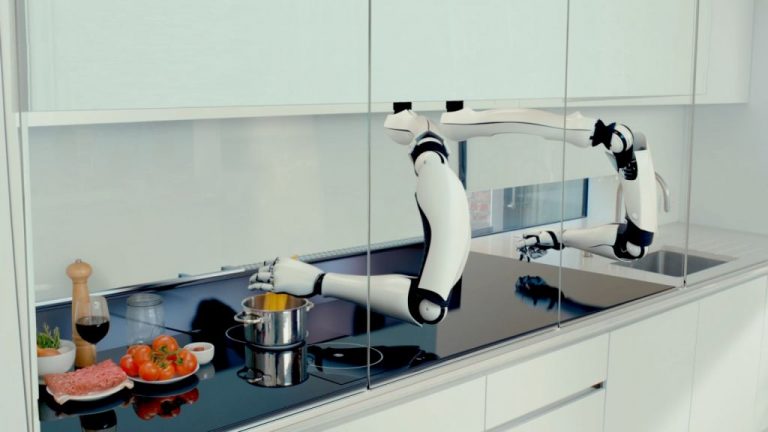 NO TIME FOR COOKING? Here are some of the best new products to make your kitchen time a breeze!

Technology now allows us to perform more technical operations in the kitchen, and some food processors can prepare whole dishes in a short time and with little effort, just by adding the ingredients to the machine. Companies like Momentum Machines or Chowbotics target this growing market, which has become increasingly popular.

Chowbotics has landed $5 million to develop what it’s calling food service robots. These are machines designed to prepare food in restaurants, offices, airports, malls and hospitals. The company’s flagship product, Sally, is a salad-making robot that uses 20 different food canisters to prepare and serve more than 1,000 different types of salads. The company is now ready to develop new robots that can prep a range of other foods such breakfast, burritos, tacos and more!

To be sure, these food processors are meant to be assistants in the kitchen, not replacements. No food processor can ever really duplicate a chef’s creativity or experience, and they can’t taste food to let you know if it’s perfectly done. More importantly, most machines are quite limited in their movement, and can only do so much.

To address this challenge, English company Moley Robotics has proposed a solution. In 2014 the company prototyped and presented the MK1 to the public, and it later won first prize in the innovation competition at the Consumer Electronics Show Asia in 2015. MK1 is not a food processor in the way that we’re used to seeing: instead, it is quite literally a robot that cooks. The machine is equipped with two mechanical arms that resemble human arms, and the apparatus is driven by more than 20 engines. The computer is programmed to mimic human movements, so before cooking the MK1 must first “see” a cook prepare the dish. After storing the process in its memory, the MK1 can faithfully reproduce the recipe. Still, the robot is not yet ready to take over for humans yet: before beginning the recipe, the ingredients must be placed in the correct order, and within easy reach of the mechanical arms.

The technology behind the MK1 is at the very forefront of science: the arms have 24 junction points, a 3D camera that recognizes movements and shapes, and 129 sensors that detect pressure, heat, and micro-vibrations. For now, the internal memory can hold up to 48 recipes but Moley Robotics is developing a platform to share more than 2000 recipes.  The launch is expected in 2018, and the price tag is substantial: models starts at $15,000 and upgrades (including a built in refrigerator and dishwasher) can run up to $72,000.

It may not be cheap, but the kitchen of the future starts now!

The Future Food Institute is partnering with Maker Faire Rome – The European Edition 4.0 for the curation of the agritech and food tech pavillon. It is an Italian-based non-profit organization with global horizons that aims to build a more equitable world through enlightening a world-class breed of innovators, boosting entrepreneurial potential and improving agri-food expertise and tradition.