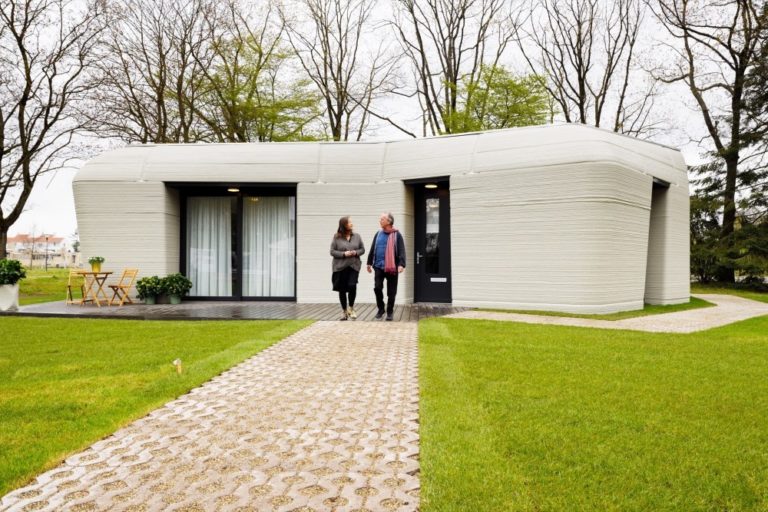 A Dutch couple pays €800 rent per month to live in the future: a 3D printed house

Project Milestone is the 3D-printed house this couple lives in, the first example of inhabitated 3D printed house

Retired shopkeepers Elize Lutz and Harrie Dekkers are getting used to living inside the first legally habitable and commercially rented property, where load-bearing walls were made using a 3D printer. The house is the first of five within ‘Project Milestone’, a joint construction and innovation project between Eindhoven University of Technology and the Vesteda housing corporation.

Project Milestone can rightly be seen as a milestone for many reasons. Not only when it comes to the technology and the builders, but also with respect to design, the municipality, the future occupant and the landlord. When the first occupant receives the key, there is a home that meets the latest needs for comfort. Made sustainably and energy-efficient, but also comfortable, light and quiet. And in fantastic wooded natural surroundings.

Ultimately, the project will complete 5 houses, with both printing technology and home design becoming increasingly complex, as one is build after the other. If the ground floor is still being printed off-site, the 2-storey fifth home will be manufactured entirely on-site. More than an experiment, these houses are intended to be occupied for at least several decades.

First tenants to receive the key of a 3D-printed house

A boulder-shaped concrete house in the Netherlands has become the first lived-in 3D-printed home in the country after its tenants received the key last April 30. Located in a suburb of Eindhoven, the single-storey home is said to be the first 3D-printed home in Europe where people actually live.

On April 30, Dutch couple Elize Lutz and Harrie Dekkers received the keys to their home in Project Milestone. “I saw the drawing of this house and it was exactly like a fairytale garden,” Lutz explained in an interview to The Guardian. “It is beautiful.” “It has the feel of a bunker – it feels safe,” said Dekkers.

The futuristic design from Houben / Van Mierlo architects has succeeded in being timeless. The design results from the typical possibilities of the new technique. The 3D printing technique gives freedom of form, whereas traditional concrete is very rigid in shape. This freedom of form has been used here to make a design with which the houses naturally blend into their wooded surroundings, like boulders.

The house has curved, sloped exterior walls and was constructed through printing layers of stacked concrete to form 24 individual components. These pieces were printed at a nearby printing site and transported to the plot to be assembled, fixed to a foundation and fitted with a roof, windows and doors.

“With the printing insulated and self-supporting wall elements curved in three planes, we’ve taken important steps in this project in the further development of 3D concrete printing in construction,” said Weber Benelux CEO Bas Huysmans. The construction company developed the concrete mortar for the project and helped develop the printing technology.

Inside, the home’s stacked concrete walls were left exposed to reveal its layered texture. Floor-to-ceiling windows interrupt the concrete layers and are recessed within its thick walls.

The 94-square-metre home includes an open-plan kitchen-diner and living area that occupies over half of the floor plan, while a large double bedroom and bathroom are contained within the remainder of the home.