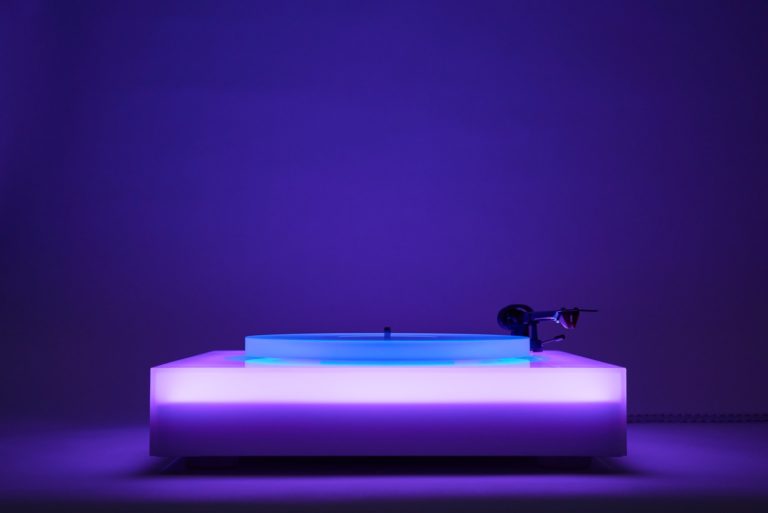 Artist and musician Brian Eno has unveiled a new colour-changing turntable, which puts a psychedelic contemporary spin on the classic record player

Brian Eno has collaborated with the Paul Stopler Gallery to create a limited edition colour-changing neon turntable. The turntable, which has a limited run of 50 units, glows various colours as music plays and is available to buy through enquiries on the Paul Stopler Gallery website. Right now, enquiries are the only option, implying the price point is expecting to be very high.

Of the new turntable, Eno said: “The light from it was tangible as if caught in a cloud of vapour. We sat watching for ages, transfixed by this totally new experience of light as a physical presence’. Released in a limited edition run of 50, the turntable is a psychedelic and evolving blend of sound and vision, and a piece of art in its own right.

“One of the great breakthroughs of evolution theory is that you can start with simple things and they will grow into complexity. This is very unintuitive — it’s one of these things that the human brain isn’t immediately capable of grasping. It doesn’t make sense until you see it,’ Eno continued. ‘You have the idea that this small thing, which can’t contain that many instructions, produces this hugely complex interwoven, interdependent world. One of the things I like about this piece of work is that it stands as proof of that.”

It’s not quite right as your first turntable or for an Christmas gift, but if you’re looking for a show-stopping piece of art for your home, and you’ve got a show-stopping bank balance to match, you can find out more about the turntable on the Gallery’s website here.

Brian Eno is many things: composer, writer, record producer, visual artist, musician and self-described ‘non-musician’. One of experimental pop’s most innovative figures, he’s been a member of Roxy Music, collaborated with David Bowie, U2, Coldplay, Laurie Anderson and Grace Jones, and invented the term ‘ambient music’.

Since the 1970s, Eno’s visual art has been dedicated to the potential of light. Drawing on Light and Space motifs, Mondrian, Suprematism and the early-20th-century Russian avant-garde, Eno’s sense-saturating work plunges viewers, and listeners, into a meditative, detached state. He’s installed work on the sails of Sydney Opera House, the Lovell Telescope at Jodrell Bank and created healing music and light installations for hospitals.

Alongside etchings, lenticular printing and sound works, Eno is known for his kaleidoscopic light boxes – which sit somewhere between the soul-snatching awe of a Mark Rothko and the optical seduction of a James Turrell – seamlessly drift through infinite combinations of seductive self-generated ‘colourscapes’ using a series of interwoven LED lights.