Nitinol, the versatile metal: from blood vessels to Mars 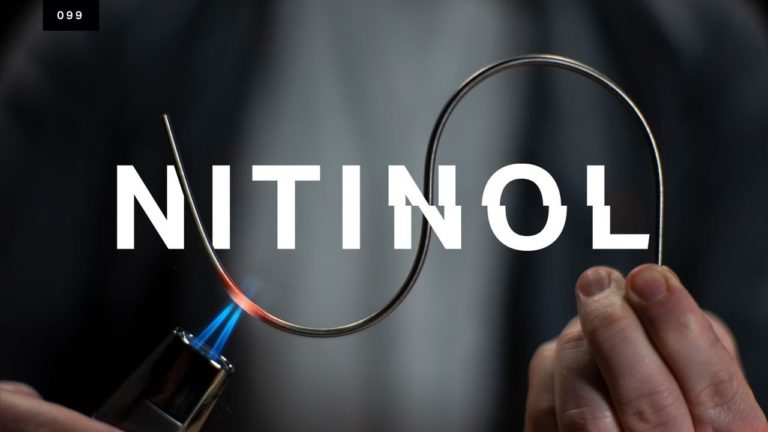 NINITOL,THE metal with a memory, will shape our future on Mars

Ninitol is a metal that can move on its own. It will play a key role in NASA’s next voyage to Mars.

A rover on the Moon has metal wheels that can flex around rocky obstacles, then reshape back to their original form. On Earth, surgeons install tiny mesh tubes that can dilate a heart patient’s blood vessels all on their own, without mechanical inputs or any wires to help.

These shape-shifting capabilities are all thanks to a bizarre kind of metal called nitinol, a so-called shape-metal alloy that can be trained to remember its own shape. The decades-old material has become increasingly common in a wide range of everyday applications. And in the next decade, the metal will face its most challenging application yet: a sample return mission on Mars.

Nitinol, made of nickel and titanium, works its magic through heat. To “train” a paper clip made of nitinol, for example, you heat it at 500 degrees Celsius in its desired shape, then splash it in cold water. Bend it out of shape, then return the same heat source, and the metal will eerily slink back into its original form.

Nitinol (pronounced night-in-all) is a metal alloy that has unique properties and uses, the most common being that it can be made to “remember” or change shape depending on temperature. The name represents its elemental components and place of origin.  The “Ni” and “Ti” are the atomic symbols for Nickel and Titanium and the “NOL” stands for the Naval Ordinance Laboratory where it was discovered in 1959.  Scientists were trying to develop a heat and corrosive resistant alloy, and in that process, created an alloy made of 55% nickel and 45% titanium.

What is Nitinol used for?

Nitinol has been around since the early 1960s but was not commercialized until twenty years later, due to the tight controls needed in the manufacturing process.  It has become a very important material for designers of robotics and medical equipment over the past several decades.  Its superelastic (10X as flexible as other metals) and thermal shape memory properties are unlike any other material available for engineering and product development.

Nitinol is most often used in applications that require tight space requirements. Nitinol best performs in an area where conventional mechanisms cannot fit.  An extremely useful application for Nitinol wire is where a device or structure needs to be inserted thru a small opening and then released to open to a larger set size.  A structure can be compressed to fit into a small diameter delivery tube and then inserted into position and allowed to open to several times the diameter of the delivery tube.

How does Nitinol work?

One of the most valuable properties of Nitinol is the two-way shape memory effect. This shape memory effect is when the metal undergoes a reversible phase transformation between the Austenite and Martensite phases. The atoms of metals are arranged in specific structures, depending on their components, but rarely change structure shape while still solid. 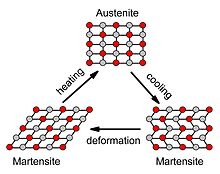 Under high temperatures, the metal enters the Austenite phase, where it achieves maximum stiffness and is spring-like when bent. The metal enters the Martensite phase during low temperatures. In this phase, the metal feels rubbery and bends easily.  When Nitinol is in the Martensitic form it can be easily deformed into a new shape.  However, when heated through its transformation temperature it reverts to Austenite and recovers its previous shape.

The video show it better:

What are the real-world applications for Nitinol?

In robotics, Nitinol can be used as an actuator where an electrical current (or heat) is applied to a stretched wire, and the wire will contract while the charge is applied and relax once the charge is removed.  Unlike most metals, Nitinol contracts in length when heated but will maintain the same absolute volume.  Also, its thermal movement is 100 times greater than other metals.

A bone staple is one example of the use of thermal size contraction; where the staple is stretched open and inserted into two holes in the bone to be reconnected and then heated to return to the original shape. This technique effectively pulls the two pieces together and holds them in place during the healing process.

Another medical device example is a stent which is cooled and mechanically squeezed to fit into a small diameter catheter inserted through a vein. Once positioned the stent is released from the constraining sleeve and allowed to return to its original shape, after reaching body temperature, holding the artery open.

For elastic deployment, Nitinol wire can be mechanically held in place in a fixture and then heated in a fluidized temperature bath, at a prescribed temperature and time, before being quickly submerged in cool water. Once removed from the fixture the wire retains its shape regardless of angle or intensity of deformation. When let go, the wire will return to its set shape. There are numerous examples of this application like The Homer Mammalok needle/wire localizer.  The curved wire is fed through a straight cannula and upon exiting it curves into a “J” shape it was previously set to. This process can be repeated dozens of times without deforming.

source: The Verge I Research Gate I NASA