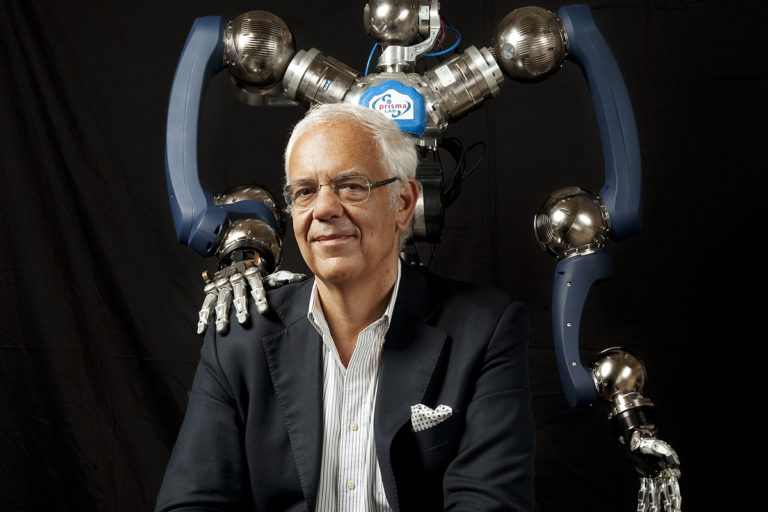 PROF. BRUNO SICILIANO WINS ONE OF THE WORLD’S MOST PRESTIGIOUS AWARDS

It is the Engelberger Robotics Award. Prof. Siciliano is curator of the ‘robotics’ section of Maker Faire Rome

There is an Italian among the winners of the Engelberger Robotics Award 2022, considered the most prestigious award in the world for robotics: it is Bruno Siciliano, engineer, academic and science communicator, professor of Automatic Control at the Federico II University of Naples, Director of the ICAROS Center and Coordinator of the PRISMA Laboratory at the Department of Electrical Engineering and Information Technologies, as well as inspirer of the ‘Robotics’ section of the latest editions of Maker Faire Rome.

We asked him for a statement, which we report in full:

I am deeply flattered to receive the world’s most prestigious award in my field, the Engelberger Robotics Award for Education. A recognition for my great passion for robotics born as a teenager on the books of Isaac Asimov.

I was born in 1959, the same year the first robot prototype was developed. I have devoted a large part of my life to robotics. At the beginning of my doctoral studies, I was thrilled to read Joseph Engelberger’s book “Robots in Practice: Management and Applications of Industrial Robots” with a foreword by Asimov himself.

During my professional career I have trained and inspired generations of engineers and researchers in robotics and automation. However, I have another great passion in my life, Naples. I have always felt privileged to have been born, raised and worked in Naples. In 1986, after earning my PhD from Frederick II, the oldest secular public university in the world, I decided that I would build my academic future there. I did it for my city and for my Alma Mater, refusing a professorship in a prestigious American university. I must also express my gratitude to Diego Armando Maradona who led my beloved football team to win in the late 1980s thus influencing my choice to stay in Naples, the city that has been a school of life for me with great professional and social opportunities and in which I strongly wanted the creation of an international robotics school.

Receiving the world’s most prestigious honor in my field, the Engelberger Robotics Award for Education, represents the pinnacle of my professional career. Unlike other awards for which you collaborate with the person proposing the nomination, in this case the nomination came by surprise and is the sweetest news I could receive. Therefore I would like to warmly thank the Association for Advancing Automation, my unknown supporters, my distinguished colleagues from the robotics community, my research team at the PRISMA Lab, my students and, last but not least, my family and friends for always supporting me over the years.

“Keep the gradient” is my inspiring motto, to be understood as the constant search for new ideas and new solutions, a hymn to complexity to seize challenges and opportunities. My sincere wish is that from the futuristic visionary ideas of Asimov and Engelberger, through the brilliant technological achievements of the many robotics of this era, our field will maintain the gradient and, quoting the motivation for my award, all together we will continue to contribute to progress. of the Science of Robotics at the service of Humanity. Thank you very much indeed from the bottom of my heart!

In the video, prof. Siciliano at Maker Faire Rome 2020:

The Engelberger Robotics Awards are named after the father of industrial robotics, the American Joseph F. Engelberger. Since 1977, the awards have been awarded to 134 robotics leaders from 17 different nations for excellence in technology development, application, education, and leadership. Each winner receives a $ 5,000 prize and a commemorative medallion.

The six winners were selected by the Past Chairs of the A3 Technology Strategy Board.

The other five prizes were awarded to:

Even prof. Khatib is an acquaintance of Maker Faire Rome: he was in fact keynote speaker in the 2020 edition, with a robotics project for marine archeology, introduced by prof. Siciliano, who called him ‘the brightest mind we have in the robotic landscape, is a true world ambassador of robotics. “Here is the video of his speech:

Jacobs, Khatib and Raibert will be awarded at a special dinner organized within the 2022 edition of the Automate Show, the fair dedicated to automation technologies that this year will be held in Detroit, from 6 to 9 June.

Professor. Siciliano and the other two winners will be celebrated during an event scheduled for 20 June as part of Automatica, the fair dedicated to smart automation and robotics, which will be held in Munich from 21 to 24 June.

Association for Advancing Automation (A3)

The Association for Advancing Automation (A3) is the world’s leading advocate of the benefits of automation. A3 promotes automation technologies and ideas that transform the way of doing business and that have the power to change society for the better and support its progress.

A3 members represent nearly 1,100 automation manufacturers, component suppliers, system integrators, end users, academic institutions, research groups and consultancy firms from around the world who work on automation projects and are committed to promoting their role.