Seafood is awesome, extinction is not: here’s Ahimi, the new vegan tuna! 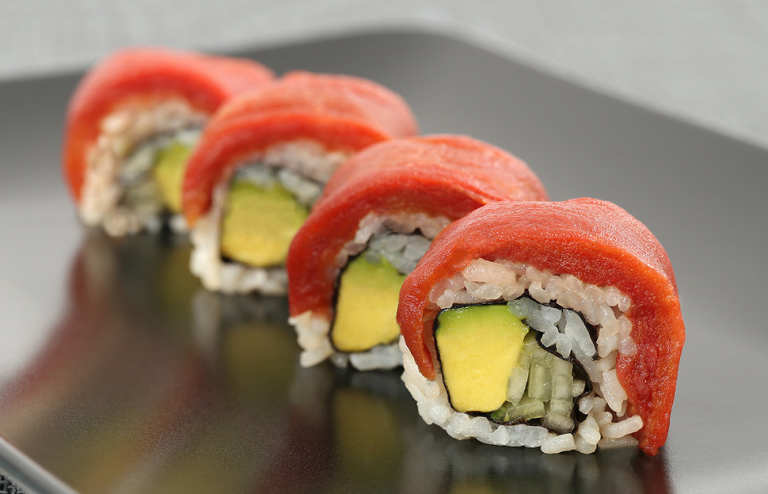 “Seafood is awesome, extinction is not” – the motto that inspired the creation of Ahimi tuna, the world’s first plant-based alternative to raw tuna, has won over the critics of the New York Times and looks to be a hit.

The mission, which will be presented at the Maker Faire Rome (October 12-14, 2018), is an integral part of the Food Innovation Program, (an international second level master’s degree from the University of Modena and Reggio Emilia, the Future Food Institute and the Institute For The Future of Palo Alto. During the trip the young researchers met various companies and startups related to the world of food innovation but with a particular focus on 4 main topics: sustainability and the circular economy, agricultural innovation in rural and urban contexts increasingly “smart”, the future of food service and proteins. In relation to the last topic, while in New York, the researchers met Ocean Hugger Foods: a very interesting company created by James Corwell, who is one of 69 American Certified Master Chefs.

If you were told that Ahimi tuna had the same appearance as the fish we find in our favourite sushi restaurants but it’s made from tomatoes would you believe it? Maybe not but it does in fact exist and its name is Ahimi. Ahimi is the first vegan tuna made of tomatoes, water, soy sauce, sesame oil and sugar, which has the same red color as raw tuna. This futuristic vegetable sushi means we do not have to give up the pleasure on our palates but sets the bar for refined dishes with awareness to environmental sustainability.

The conservation of marine species at risk of extinction is the central focus for James Corwell who says “Seafood is awesome, extinction is not!” That’s why Ocean Hugger Foods other alternatives such as products based on carrots and aubergines that can be used in place of salmon and eel. The love for good food starts from the raw ingredients, for this reason eating consciously is becoming increasingly more important and this means being responsible for what happens on the planet and what we put on our plates.

Innovative companies such as Ocean Hugger Foods are an example of “ethical cuisine”. Not only do they benefit the environment, but as the products are low in fat and cholesterol-free they also provide healthy diet options. Ocean Hugger Foods is a testimony to the fact that eating well also means thinking about the impact our choices have on our surroundings. They show us the importance of having the curiosity to look for new solutions and the courage to experiment with them.