Sustainable Bamboo is taking over in Africa. Could it be a solution somewhere else, too?

It is the new fabric to solve many problem: “In this crisis, let nature be part of the solution”.

Bamboo, nicknamed the wonder plant, is the strongest and fastest-growing woody plant on earth, and supplies a global trade worth an estimated US$2 billion per year.

The lion’s share is earned by Asian countries, whose bamboo-based industries span a vast range from paper making and scaffolding to luxury flooring and foods. But Africa is also witnessing a boom in bamboo.

Why giant bamboo is sustainable?

Bamboo is fast-growing, so it provides a rapidly renewable source of fuelwood and timber. While hardwood trees can take 30 years to mature and must be replanted post-harvest, giant bamboo matures in only a handful of years and can be harvested every year for its entire lifecycle.

In fact, planting and harvesting bamboo for fuel can help limit the depletion of tree cover and natural forests. Giant woody bamboos can also sequester carbon, helping to curb climate change. They’re one of several trees and plants that can generate benefits for people while also restoring land.

In African countries that produce bamboo, research and development is usually the work of the forestry or agricultural sectors. However, scaling up requires expertise in specialized areas — such as micro-enterprise development, small-scale or industrial bamboo growing, and production of bamboo products — that might be better found in the private sector. 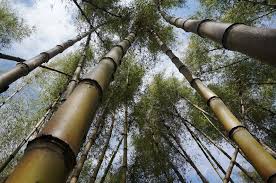 Kenya: A trove of green opportunities, specially for the sustainable bamboo

In Kenya, the bamboo industry involves a multi-stakeholder approach, with consultations among relevant government ministries, NGOs, research institutes and universities and others, facilitated by the Kenya Forestry Research Institute (KEFRI).

One of the largest stakeholders to take up bamboo development so far is Green Pot Enterprises, launched in 2014 to promote bamboo farming in Kenya and to help the country maximize the commercialization of bamboo. So far, the organization has farmers covering over 1,000 acres of land in Narok County, with another 2,000 acres to be planted this year. It is targeting 4,000 acres by the end of 2016. 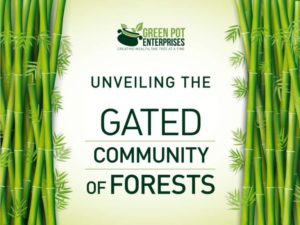 Green Pot has two principal development plans. With a “gated community of forests,” the organization buys a large parcel of land then subdivides it into 10-acre and 2-acre plots for lease by Kenyans at “affordable rates,” according to its website.

Each buyer gets a title deed (the bamboo farm is managed as one whole unit despite the multiple owners) and a 30-year sublease. The company plants and fully maintains the forests and markets the produce once it is ready.

A parallel community outreach programme ensures that for every acre of bamboo planted in the gated communities programme, a corresponding acre is planted by members of the local community. This programme finances the supply of seedlings.

“Globally, there is a big push for bamboo because of its immense financial and environmental benefits. It brings wealth to the people, cleans rivers, stops soil erosion, and so on,” Green Pot’s chief executive officer, Caroline Kariuki, told Africa Renewal. She says the gated communities programme is mainly in Narok County, but the outreach campaign is active in more than 10 counties across the country. 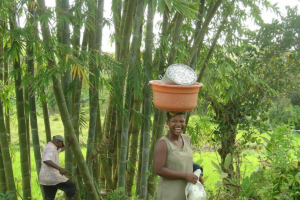 Bamboo has been increasing in importance as a non-timber forest product in Tanzania over the last two decades, according to  Locally bamboo is sought for handicrafts, residential fencing, flower farming, farm props for banana plantations, furniture and other minor cottage industry products like basketry and toothpicks.

Almost all the bamboo products made in the country are used domestically. Bamboo farms should be established to ensure a sustainable supply for the handicraft, construction and horticultural industries, among others.

INBAR, in partnership with the International Fund for Agricultural Development, helped establish 100 bamboo nurseries and set up micro-enterprises, and trained 1,000 locals in a specially created Bamboo Training Center. Today some 5,000 women in these rural communities produce crafts and desks for local schools and sell charcoal briquettes.

Ethiopia: The potential of sustainable bamboo as a strategic crop

With about 1 million hectares of indigenous bamboo, Ethiopia is the biggest bamboo grower in Africa. It is home to 67% of all African bamboo.

The country has two species—Yushania alpina, planted and managed by farmers in the highlands, and Oxytenanthera abyssinica, which grows naturally in the lowlands.

How is it used in Ethiopia

In Ethiopia bamboo is being used for protecting watersheds, for intercropping, to create shade for other crops, as a windbreak and as a natural mulch to provide drought protection. People also use it for fuel, fencing and furniture, and sometimes bamboo shoots are used for food and animal fodder.

Despite the size of its natural bamboo forest, Ethiopia has only recently started to tap its potential and is now eager to embrace bamboo technologies and knowledge transfer, mostly from INBAR and a range of Chinese experts. The country has three factories and the sector employs more than 1,000 people.

“Bamboo should be considered the most important, fast-growing, strategic intervention for afforestation and deforestation in the mountainous and degraded areas of the country,” said Ethiopia’s state minister for agriculture, Ato Sileshi Getahun, at a recent event.

Ghana currently has about 400,000 hectares of bamboo, a mostly natural stand in the western region. Some exotic species have been introduced into Ghana, including the thick-walled Beema bamboo from India, and the near-solid Oxytenanthera abyssinica from Ethiopia. These two are particularly useful for biomass energy and are well adapted to drier areas.

According to Michael Kwaku, director of INBAR (International Network for Bamboo and Rattan) Ghana, 18 species of exotic bamboo were first introduced into the country from Hawaii in 2004 by the Ghanaian branch of the Bamboo and Rattan Development Programme (BARADEP), as part of a project with the Opportunities Industrialization Centre. The project was also extended to neighbouring Togo.

Until recently, bamboo was a noncommercial open-access resource in Ghana.

Over the past few years, the usefulness of bamboo and its commercial value is being appreciated. Commercial exploitation has begun for such products like bamboo bicycles, bamboo charcoal, furniture, bamboo boards and building support poles,” Mr. Kwaku told Africa Renewal. Bamboo is also being used to restore degraded mining areas. 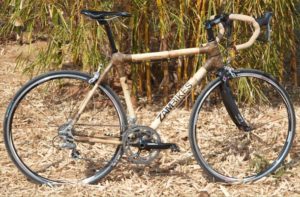 Zambia: Innovation at its best

In Zambia, a local company, Zambikes, is producing bamboo bikes, bike trailers for transporting agricultural goods, and innovative bike-drawn “Zambulances” to be used at clinics around the capital, Lusaka.

Challenges to the development of commercial bamboo planting include the slow pace of state uptake and support as the sector is still young and financial institutions are reluctant to grant credit facilities, including loans. The micro-enterprises are still considered poorly organized. The skills and technology gap is a challenge.

What INBAR is doing?

INBAR is helping in western Africa with an awareness campaign about the economic potential of bamboo and about forming partnerships with governments. Currently eight member countries in West and Central Africa have conducted training workshops and educational tours to China to acquire firsthand experience of the bamboo economy.

In addition to its prospects for manufacture, bamboo can make a major contribution to reducing carbon emissions, the article said. In China alone, the plant is projected to store more than one million tons of carbon by 2050.

Many decision makers, planners and national sustainable development action plans have not yet taken into account this resource and the benefits it can bring to society.