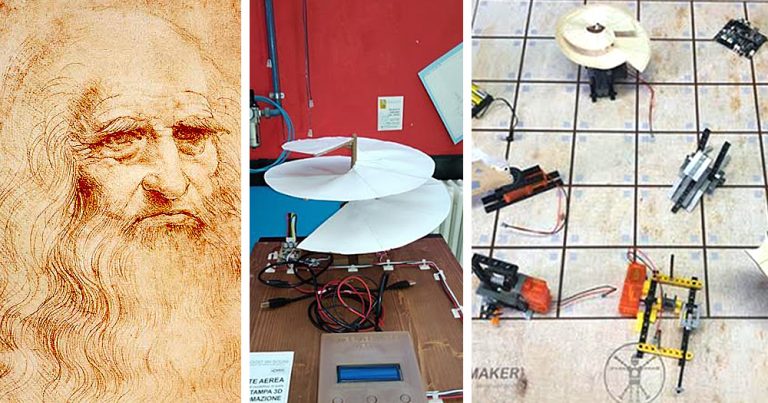 Leonardo da Vinci. A name that in general, for everyone, symbolizes genius, inspiration, science, invention, and innovation.  In fact, we could not define with any other words what the incredible mind of this Italian scientist, who lived at the turn of the fifteenth and sixteenth centuries, left to humanity.

It is from Leonardo’s pioneering work, in fact, that many of today’s inventions were inspired and have become objects and instruments of common use. And still today, 500 years after his death, Leonardo’s genius continues to inspire many people.

This is certainly the case of the makers we are about to present. They are engineers, experts, and creatives who have realized several very special projects, stimulated by the inventions of the great Italian scientist. And one might ask: To what purpose? Simply, to reintroduce to modernity for educational and entertainment purposes – what the first maker in history had already discovered centuries ago!

The president of Italmaker Emiliano Gatti, a computer engineer with a long experience in the fields of teaching and robotics, has been promoting the spread of digital skills in children for years. Therefore, over time, he has developed many projects, which have earned him ministerial and national recognition as a “Patented Inventor”. In fact, this kit that allows students to reproduce several of Leonardo’s most innovative ideas is one of those projects.

To be more precise, it is a prototype construction kit composed of an electronic board, motors, and other building components, which enables the user to recreate and more fully understand the incredible things designed by the great scientist.

Completely realistic, all the gears and models are able to move, thanks to the motors with which the kit is equipped, simulating in every way Leonardo’s inventions. Through coding, programming, and a specific app, children are able to recreate benchmark historical science and physics discoveries and inventions using our current technology.

The genius Leonardo by designing the aerial screw (helicopter), was even able to anticipate a fundamental object, namely, the propeller. He had, in fact, conceived a very similar structure, which the students at the ITIS Paleocapa of Bergamo wanted to recreate and study in-depth. Thanks to the current new technologies such as modeling, 3D printing and laser cutting, the young makers were able to build a scale model of Leonardo’s invention, measure its lift, and make it turn using a motor governed by a microcontroller. Thus modernity and traditional science have merged to give rise to some rather interesting experiments.

Two truly original ideas also come from Massimiliano Aiazzi, the inventor from Scarperia and San Piero, in the Province of Florence and founder of La Bottega delle Idee. Admiring Leonardo’s ingenuity, his projects, and his pioneering concepts, Aiazzi decided to put those principles into practice, giving life to two truly unique creations. One is the “Rubber Band Car F=kδ”, a wooden model car powered simply by a rubber band and a “lantern gear” designed by Leonardo. In addition to being original, this car was also made entirely by hand and with salvaged wood.

Also based on the genius of the great inventor Leonardo, is this original mechanical pinball machine called “The Four Horsemen”, designed for four players competing contemporaneously, made by hand, and equipped with Leonardo’s famous gears.

These edutainment (education and entertainment) projects inspired by Leonardo, along with many other original and innovative inventions with the same objectives, will be present at Maker Faire Rome – the European Edition 2019, the world-famous innovative technology fair that will take place from 18 to 20 October at Fiera di Rome.