The many ways the Tokyo Olympics were sustainable 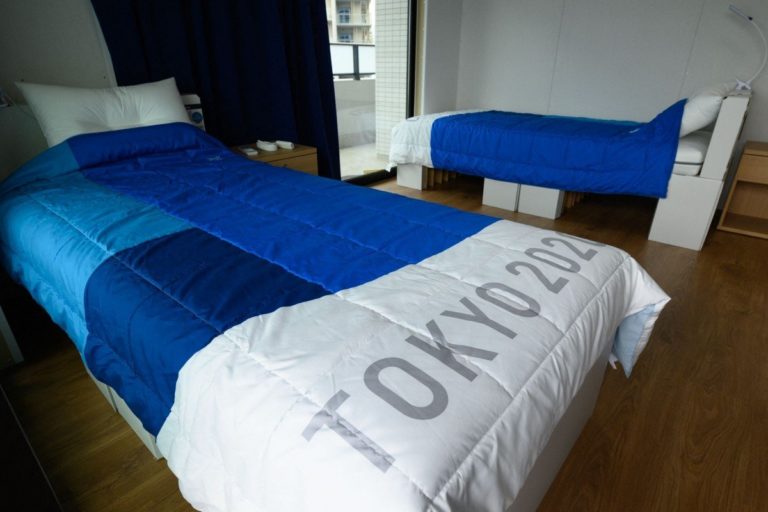 FROM CARDBOARD BEDS TO RECYCLED MEDALS, THE TOKYO OLYMPICS wanted TO BE THE GREENEST EVER

Beat the record set by London 2012: the Tokyo Olympic and Paralympic Games are aimed to be memorably sustainable

The Tokyo Olympics, which officially kicked off on July 23rd and closed down just a few weeks ago, on August 8th, have sought to do more than provide a platform for athletic competitions and encourage a spirit of global amity.

This year, in addition to these longstanding Olympic goals, the organizers of the Tokyo Games have set out to turn the world’s preeminent sporting event into a showcase for sustainability and the “first-ever carbon negative Olympics.”

To that end, the Tokyo organizing committee have purchased 150% of the needed carbon credits so as to offset the Games’ greenhouse gas emissions, with the funds going towards local projects intended to reduce CO2 emissions by a greater amount than the 2020 Games themselves will emit.

The Tokyo Olympics are also using sustainable materials in just about every facet of the event: athletes sleep on recyclable cardboard beds, podiums have been made from recycled plastic and medals have been made with metals obtained from recycled phones and other electric devices. In fact, the Games are also sending a strong signal about energy usage, relying as they do on hydrogen produced sustainably through solar energy to power the Olympic flame, cars and buses shuttling between venues, and the Olympic Village itself as part of the first phase of Japan’s planned full-scale hydrogen-powered infrastructure.

“Be better together, for the planet and the people”

The use of green energy, along with the long-term impact of the projects which will be funded by its carbon credits, will go a long way towards reducing the carbon footprint of the Tokyo Olympics, whose motto (“Be better, together, for the planet and the people”) refers back the event’s focus for a sustainable and ecofriendly Games. 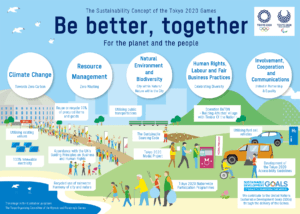 The Olympic planners have consciously carried out their preparations in line with the United Nations’ 17 Sustainable Development Goals (SDGs), which aim to create a more equitable planet along sustainable lines.

Recyclable cardboard beds and mattresses for athletes at the Olympic and Paralympic Village for the Tokyo 2020 Games. AFP

All of this year’s Olympians will be getting their rest in on beds made from cardboard. Designed to withstand weights of up to 200 kilograms, the 18,000 cardboard single beds, made especially for the Games, are designed to be recycled into paper products after use. The mattresses will also be recycled.

The 5,000 medals athletes are vying for have all been made using precious metals recovered from discarded mobile phones. The recycling effort yielded 32kg of gold, 3,500kg of silver and 2,200kg of bronze from 6.2 million old phones.

You may have seen some of the Olympic athletes receiving their medal, but did you take note of the podium they were standing on? These podiums were created by designer Tokolo Asao in collaboration with Prof. Tanaka Hiroya, a professor at the Keio University and an expert in the field of 3D printing techniques. The podiums are fabricated from recycled plastics with the concept of sustainability in mind, using state-of-the art 3D printing technology. Podiums have been 3D printed using recycled household waste and ocean plastic. For more details about the podiums, see here

Once the Games are finished (the Paralympics are still to be held), the podiums will be used for educational purposes, and some will be recycled into bottles by one of the Games’ sponsors, Procter & Gamble.

All stadiums are powered using LED lights. The Games are being powered by electricity from renewable sources. Wood biomass power will be generated from construction waste and tree clippings, while the Games will also use power generated from solar farms in Tamakawa, Naraha and Okuma in Fukushima. Hydropower will also be used throughout the event, and venues have been equipped with only LED lights.

Many of the facilities being used for the Games already existed, and have been updated from the 1964 Tokyo Olympics. New buildings, such as the main stadium, where the opening and closing ceremonies are being held, have been constructed using sustainably sourced timber. Wood from other venues, meanwhile, will be used to build public benches and other buildings once the games are finished.

The rose-gold Olympic torches are made using recycled aluminium. Designed by Tokujin Yoshioka, the torches have been made using recycled construction waste from temporary housing used in the aftermath of the 2011’s earthquake and tsunami. The rose gold torches resemble the national flower of Japan, the sakura (cherry blossoms), and both the relay torches and cauldron holding the Olympic flame are fuelled by hydrogen instead of fossil gas.

Olympians and Paralympians are being transported around the Olympic villages in specially-designed electric vehicles. Toyota modified a number of its existing e-Palette vehicles to enable accessible and fuss-free transport for athletes, while keeping things emission-free.

Torchbearers’ uniforms have been made from recycled Coca-Cola bottles. The outfits for the torchbearers at the Games have been made using recycled plastic bottles from Coca-Cola. The white and red T-shirts and trousers, which are unisex, were designed by Daisuke Obana, and bear a sash with a chequered pattern that is known in Japan as ichimatsu moyo. The same pattern can be found in the Tokyo 2020 logos.

Looking beyond Tokyo, sustainability is already taking center stage in the planning of future Olympics. The organizers of the upcoming Paris Olympics in 2024 are pledging to host the “greenest games ever.”

“For us it is quite simple,” said Tony Estanguet, a three-time Olympic canoeing gold medalist who is a key member of the organizing committee of the Paris Olympics. “Our vision is the most sustainable games ever.”

source: Lifestyle I Npr.org I Nature.com I Dezeen