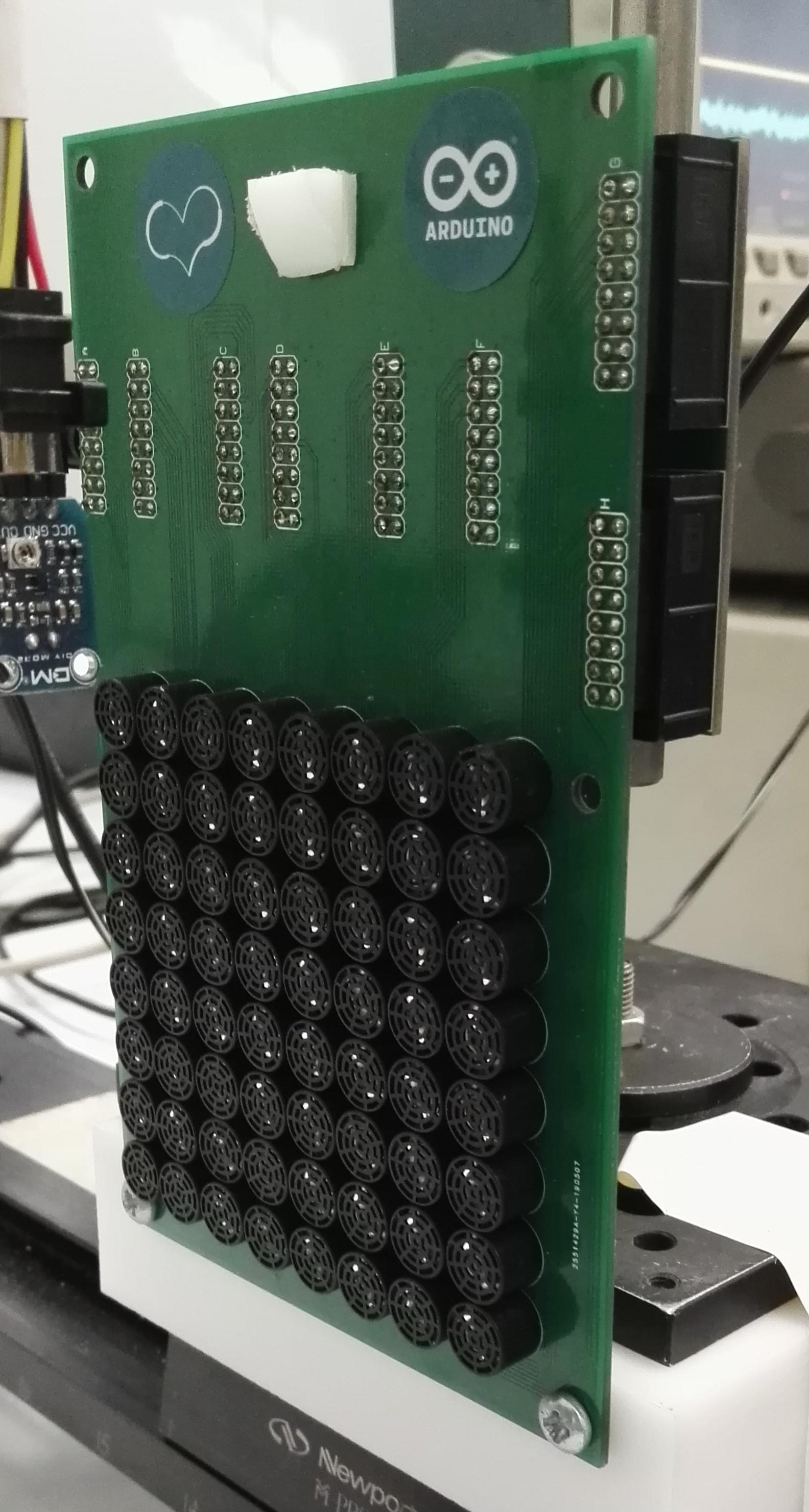 Detecting the presence, the position and the extension of the detachments in architectural coverings is at the base of the analysis of the state of conservation of ancient structures. Many non-destructive investigation methodologies have been used, and the ultrasound technique applied through the use of parametric transducers appears be very promising. The use of parametric transducers to detect structural defects has been widely proven, but normally the systems â€œoff the shelfâ€ are not focused: these systems have beams with dimensions of the order of tens of cm. Recently, the introduction of a parametric transducer driven by an Arduino board, called Ultraino, has allowed to have available a focused parametric transducer at very low cost. The use of â€œUltrainoâ€ permits to obtain beams with focal areas of the order of millimeters, at very small distances from the radiating device. This advantage, combined with the possibility of driving the device by a Matlab script, permits to implement the well-known technique of the measurement of the impulsive response in the audio range, and extract the acoustic reflectivity of the superficial point under test. Finally, the entire instrumentation has a very low price and it is easily portable and usable in situ.

GiosuÃ¨ Caliano (nickname Gino), Senior Member IEEE ('13), received the Laurea degree in Electronic Engineering in 1993 from the University of Salerno, Italy.
After the degree, he served, as post-graduate fellow, at Dept. of Electronics of University of Salerno, both in didactic and research field. His interests were in developing piezoelectric sensors of pressure and in measurement techniques for ceramicâ€™s characteristics. He was a consultant for some companies in the design of ultrasonic therapy transducers.
In 1995 he joined at F.O.S. Fibre Ottiche Sud (a plant that produced optical fiber) as Industrial Automation Engineer.
From 1997 he works at the ACULAB, Laboratory of Acoustic-Electronic, Dept. of Engineering of the University Roma Tre as responsible of the laboratory and of the research. He is involved in design and characterisation of silicon micromachining ultrasonic transducers (CMUT). In this position, he developed many typologies of CMUT transducers from mono-element transducers to 192-elements probe for echographic imaging system. He patented the new technology of cMUT's fabrication, called "Reverse Process". He has obtained first echographic images using cMUT probe in conjunction with a commercial echographic system (2003). He was Adjunct Professor of "Sensors and Transducers", since 2012 and "Electronics Laboratory" since 2017.
He is author of 136 papers on these fields published on international magazines and conferences proceedings and 12 international patents. His H-Index is 21 with 1405citations.
It was the founder of the International Workshop on CMUT and has organized the event in 2001 (Roma), 2011 (Salerno), and 2016 (Roma).
In 2009 he was the Chair of the International Conference IEEE-IUS International Ultrasonic Symposium in Rome, the most important scientific conference on ultrasonics, with more of 1000 participants all over the world.
He is "Associate Editor" of Journal of Applied Sciences, section Acoustics and Vibrations.
He obtained the "National Academic Qualification" as Full Professor on Sep. 6, 2019.
His interests range by the acoustics to microelectronics, with a special devotion to the design of electronic devices. The world of sensors, especially in the industrial environment and in cultural heritage applications, has always fascinated him, and their integration with electronics is his present job.