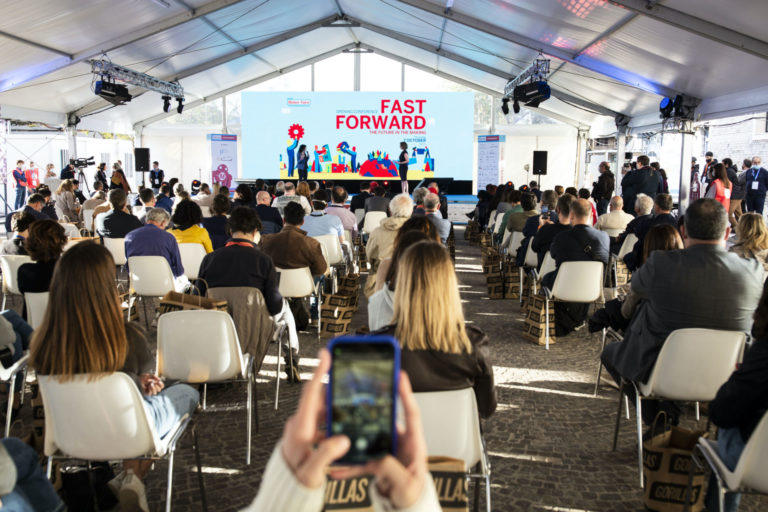 “I wanted to be here. Maker Faire Rome is an event that represents a piece of restarting, a great opportunity for startups to be able to compare themselves. It is a gateway to innovation and comparison. These months of pandemic have locked us in our bubble. An event like this serves to exchange experiences and give a lot in terms of development,” said Fabiana Dadone, Minister for Youth Policy. “Young people need to experiment’ she said, wishing everyone from the stage a ‘good return to normality’. 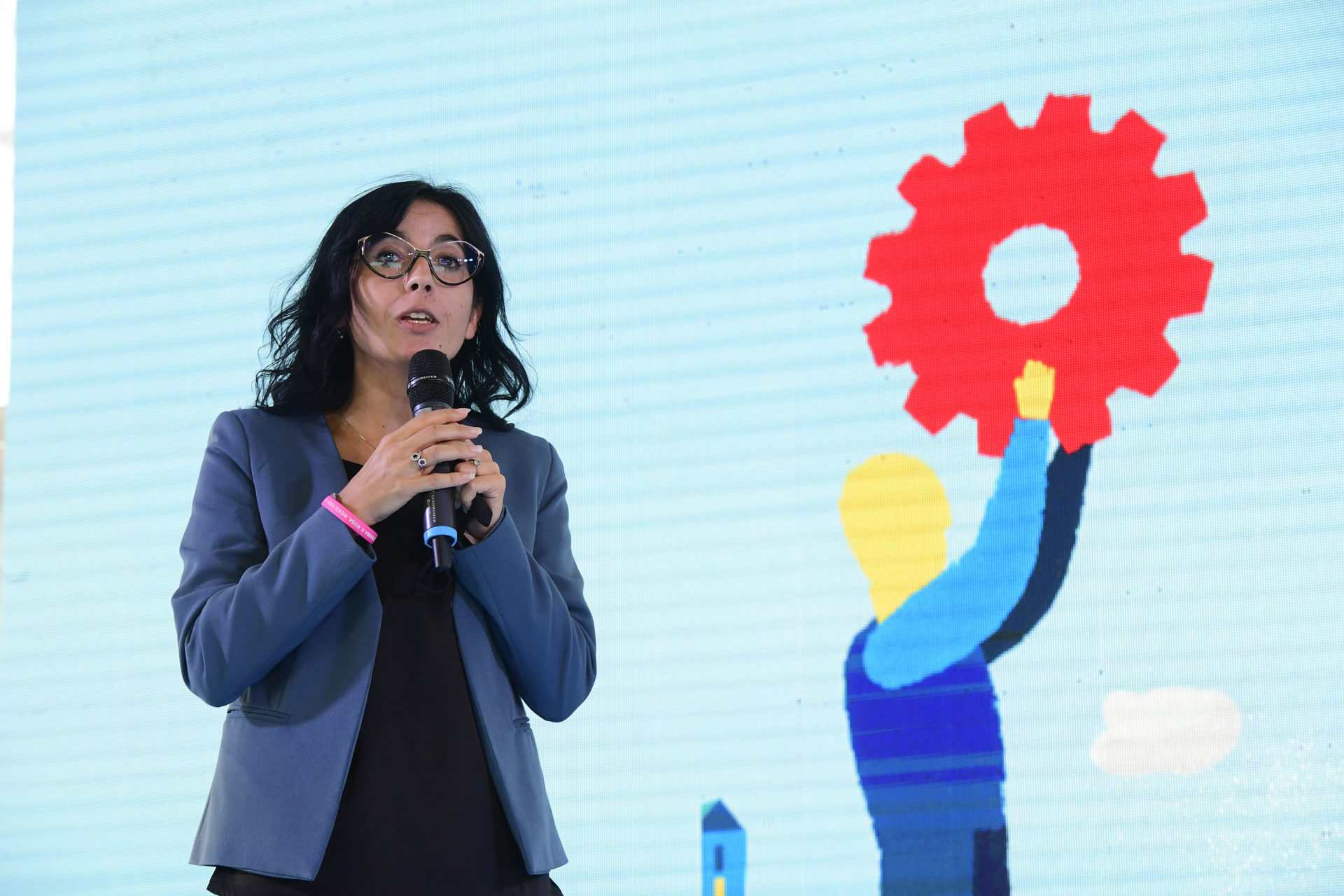 LEGGI ANCHE: Fast Forward I The Future In The Making, via a Maker Faire Rome 2021

BETWEEN THE TWENTIETH CENTURY AND NEW FRONTIERS

Under the big top, in the heart of the Gazometro area (12,000 square meters), an area that sparks between past and future, between the twentieth century and new frontiers, this is how the ninth edition of Maker Faire Rome, year 2021, kicked off yesterday. In presence and remote, a single mission, to tell the story of innovation and trace the path to the future. And after a year marked by the pandemic disaster, it’s time to ask: What can makers, innovators, designers, entrepreneurs and startups do to build a better future? On an autumn afternoon (a little cool by the October standards to which the capital has accustomed us), dozens of innovation protagonists answered this question.

THE PLACE OF INNOVATION

“Fast forward. The future is making”, because. “Maker Faire Rome is the place where innovators tell the world they think for us”. So on stage Diletta Parlangeli, before giving the floor to Lorenzo Tagliavanti, President of the Rome Chamber of Commerce, and Luciano Mocci, President of InnovaCamera, the Special Agency for Innovation of the Rome Chamber of Commerce, which has been organizing the event for nine years. The pandemic as a crisis and as an opportunity. This is the heart of this Opening Conference. “It was an intuition nine years ago,” Tagliavanti said about the origins of Maker Faire Rome. “This year it is being held in a district that was born out of Mayor Nathan’s great intuition,” Tagliavanti recalled about one of the Capital’s best-loved mayors. “An industrial and innovative area, where the PA and the way of doing business has changed. A great shock of modernity. Now we are in a similar situation, “we have a future to rebuild. What was true before is no longer true now. Now it is up to the protagonists, up to the innovators. “We have to be ready. That’s what this three-day conference is about. We are ready. Luciano Mocci then recalled how this streaming edition was born out of the needs imposed last year by the pandemic. “It is a bet that we have already won.

A LOOK AT THE WORLD

Carlo Ferro, from ICE Agenzia (Agency for the promotion abroad and the internationalisation of Italian companies) takes the floor. Because the need is to take Italian ideas, startups and projects abroad. Maker Faire is what will happen tomorrow,” he said, “it sets in motion a virtuous circle that leads Italian innovation to grow on foreign markets,” in order to attract capital, provide training and “build a system”.

The importance and beauty of taking training and research beyond the university to embrace the new challenges of society and the market. This was the heart of the speech by Marinella Levi, Professor of Materials Science and Technology at the Politecnico di Milano. Levi brought a series of objects to the stage for viewing: a bottle opener designed for rheumatic patients, a dental prosthesis, a model of the MAMBO boat, entirely 3D printed, and a 3D printed copy of the Venus de Milo. “Nine years ago we were at the Palazzo dei Congressi for the first Maker Faire,” he recalled, “and I have always been here.

STEFANO MICELLI AND THE UPSKIRT PROJECT

Between past and future in the name of technology transfer. “Maker Faire Rome is an extraordinary space that connects the technologies of Industry 4.0 and the Italian reality,” said Stefano Micelli, Professor at Ca’ Foscari University of Venice, following the path marked out by Marinella Levi and introducing the spin-off Upskirt. “Its aim is to link technology and schools with Made in Italy and its craftsmen. We need to create short circuits and connect young people and businesses. Upskirt does this through design thinking, giving free rein to the imagination and checking the results, a path of exploration and verification at the same time”. The idea is to build a bridge between technology and Make in Italy “to give it a chance to progress”, added Micelli.

Ten projects in ten minutes. This was the mission that Enrico Bassi, co-founder and coordinator of Open Dot, brought to the stage of the Opening Conference. Not only projects ‘but also stories’, Bassi stressed. “Work is not only technical training” but also “innovation and widespread collaboration”. For Bassi, “Maker Faire Rome is a place of change,” changes that leave no one behind. Among the projects he brought the story of Nicola and “Involuntary”. Then he talked about Hariri and the “Informal” project. “The first thing she produced, as an immigrant, was a plaque with her father’s name on it”. Then he turned the spotlight on Alessandro, a doctor, who invented and patented a system to simplify tracheotomy, “Interdisciplinary” is the name of the project. Experimenting, learning, teaching, training, involving, enabling, including, are “the key words of the transformation we need”. Training? “It must be inclusive and widespread, made up of many small stories of protagonists, but not heroes”.

European Space Agency (ESA) astronaut Luca Parmitano spoke in the dual role of someone who carries out health research work from space and someone who, as an astronaut, experiences health issues and daily life in space, with all the implications that living in those conditions entails. “How should we behave so as not to compromise our functions? It is essential to keep fit, to pay attention to diet. And the return from space? For Parmitano, ‘the return to Earth was not very different from what we are experiencing now after the pandemic. Parmitano spoke via video link with Tommaso Ghidini, head of ESA’s Structures, Mechanisms and Materials Division, who reviewed space technologies. “My favourite? Earth observation missions, which allow us to feel the pulse of our planet. Parmitano’s favourite technology is water recycling.

Work, digital transfer, space and energy. New energy. The same as that of the Sun and which on Earth can be generated by nuclear fusion. Eliana Demarchi, Eni Nuclear Fusion Manager & DTT Project Board Member, spoke about it in her speech, going into detail about “carbon free, inexhaustible and safe” fusion energy. Eni has set up an acceleration programme in collaboration with MIT Boston, creating a spinoff and a “challenging” road map: to produce fusion energy by the mid-thirties. One of the last steps, that of Eni, in the Opening Conference that opened Maker Faire Rome 2021: more than two hours of speeches, talks and connections to open a window on the future and ask ourselves about the role of innovators in building a better, more sustainable tomorrow.