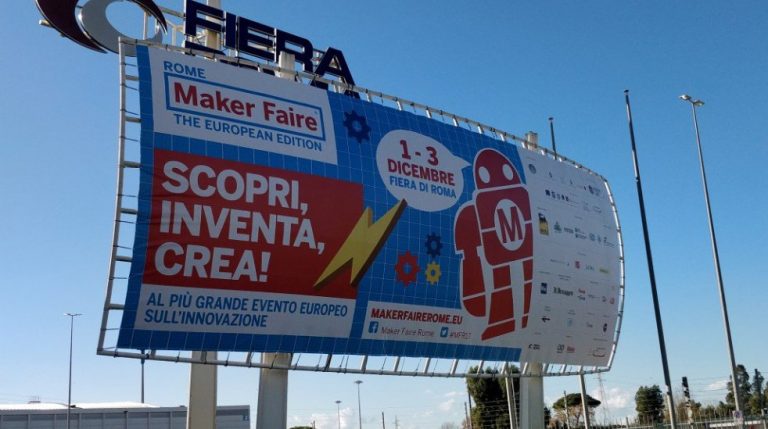 MakerFaireRome 2017, the fair of the future filled with young people.

MakerFaireRome has equaled if not passed the past international editions of the innovation fair.

The European kermesse, which has reached its fifth edition this year has in fact collected a public success equal to that of Silicon Valley and even wider than that of New York.

A leap in quality made possible not only by the wider and better organized location, but also by the offer of attractions-

In fact, by the variety of topics covered, and especially by the increasingly mature approach, which makes MakerFaireRome not just a simple exhibition of inventions, but a meeting place for innovators, research laboratories, universities and companies.

This show shines a brilliant spotlight on the value of new cultures of work and collaboration and open source; the proliferation of powerful tools that can augment our capacity as creators; and a demonstration to our children of the importance and fun of living as a life-long learner.

And this team brings stakeholders like the Italian Minister of Economic Development to the table – and the stage.

Rome has thus become a reference point at national and European level since 2013.

Or, as we like to summarize in an expression, the Eternal City has been re- conquering the role of the capital of #innovation.

From the 4.0 industry to robotics, the frontier that could radically change our lives in just a few years, MakerFaireRome is also an opportunity to try to understand where technology, and therefore society, is going.

But if we talk about expectations Massimo Banzi, whom together with Rome Chamber of Commerce is the curator, can think only of one thing:

“I would like Rome to realize that it has an event that is a heritage, and that embraces this opportunity. Today the city needs something that gives it hope in the future . Our Maker Faire will perhaps be less spectacular than the others in the world, where special effects abound but we have something that others do not have: we put digital artisans in contact with big companies and above all we convince small businesses that in order to make innovation we do not need to have tools powerful. We have seen kids being contacted by industry giants for their ideas. And for me this is the real show ».

Do you wanto to enjoy more? HERE